The second annual Horace Greeley All-Athlete Walkathon was held at the high school’s competition field on Sunday, November 8, 2015. Students from every sport rallied around two local foundations raising more than $16,000 with their fundraising efforts. 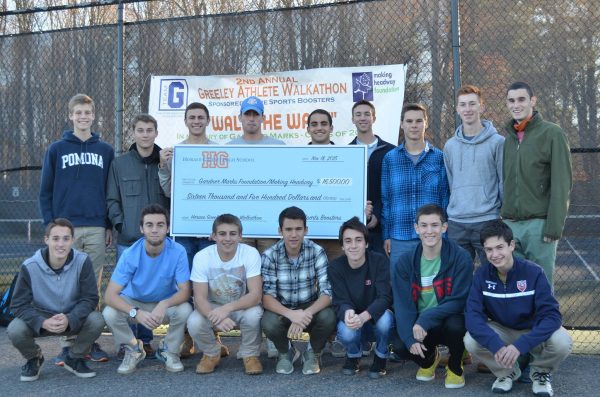 The two organizations teamed up for the event because their missions align around helping children with cancer. Hundreds of students, supporters and parents walked in solidarity during the two hour event to support Team G-The Gardner Marks Foundation and Making Headway Foundation, both of Chappaqua.

Team G-The Gardner Marks Foundation was created in memory of Gardner Marks (Greeley Class of ’08) a school athlete who lost his life due to complications from cancer treatment. This newly formed organization is devoted to raising money toward grants for cutting edge cancer/stem cell research.

Headquartered in Chappaqua, and now in its 20th year of operation, Making Headway Foundation was founded by Edward and Maya Manley with Clint Greenbaum. Its mission is to provide care and comfort for children with brain and spinal cord tumors while funding medical research geared toward better treatments and a cure.

Both organizations have a common vision…to bring support and lifesaving treatments to kids battling cancer, and brain or spinal cord tumors.

Local merchants such as Villarina’s Deli, Elder’s Auto Spa, Chappaqua Mobil and Old Stone Trattoria sponsored the event with food and gift card donations for the participants. Donations are still being accepted at http://bitly.com/GreeleyWalk2015.