(Valhalla, NY) – Overlooking both The Rising memorial and the newly unveiled Westchester County 9/11 First Responders Memorial, Westchester County Executive George Latimer joined the County in mourning those lost due to the terrorist attack that day twenty years ago. 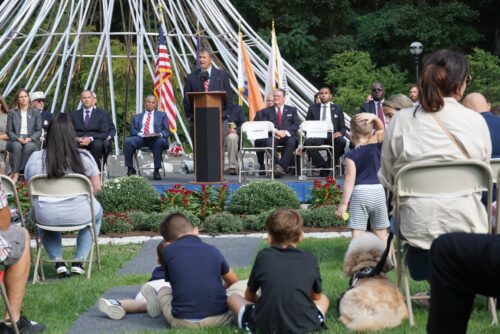 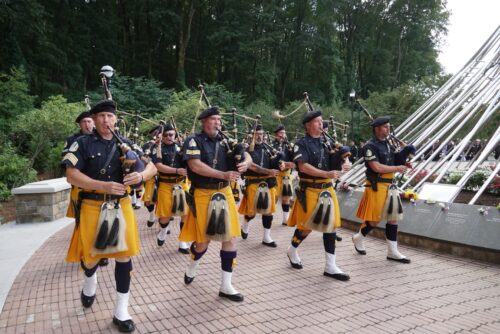 Latimer said: “Each year, this day is day of reflection for those who lived through it and a day to provide comfort to those who lost so much. Now, twenty years later, this day must also serve as a lesson to those too young to remember. I hope this ceremony can both provide comfort and a reminder to all what occurred on that seemingly normal September morning on which the world was changed forever.” 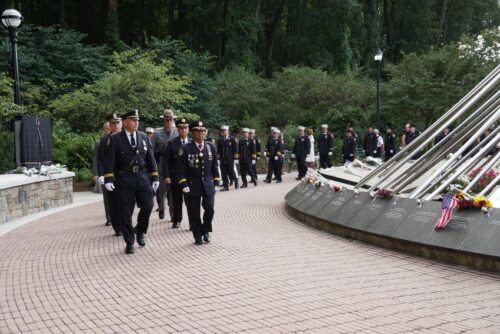 Solis said: “As a reporter who covered the attacks on 9/11, the 20th anniversary has special meaning. I am truly honored to be taking part in the ceremony in Westchester where I live, and where so many families were impacted.”

The ceremony opened with a procession Westchester County Department of Public Safety Ceremonial Unit Color Guard, the Pipes and Drums of the Police Emerald Society of Westchester County and representatives from the NYPD and FDNY. This moving tribute was followed by a rendition the Star Spangled Banner performed by New York Presbyterian Lawrence ICU nurse and Mount Vernon resident Carlo Jose “CJ” Zenarosa.

The solemn occasion was then marked by the laying of a wreath by Deputy County Executive Ken Jenkins, Department of Emergency Services Commissioner Richard Wishnie, Lisabeta Vukaj – sister Of Simon Marash Dedvukaj who was killed in the north tower – and a member of the Westchester County Department of Safety Police Honor Guard.

The day prior to the ceremony, September 10, Latimer was joined by family members of those fallen for a private unveiling of the newly furnished Westchester County 9/11 First Responders Memorial. This new monument, placed next The Rising at Kensico Dam Plaza, was designed by a committee made up of loved ones of those lost.

Committee Co- Chair and New York City Police Officer Matthew J. McCauley said: “Twenty years after our first responders rushed to the disaster areas that were created in the wake of the September 11, 2001 terrorist attacks, these selfless, courageous, brave and humble men and women continue to make the ultimate sacrifice from 9/11 related illnesses.  First responders from eleven different agencies, including six from the City of Yonkers Fire & Police Departments and four from the City of White Plains Fire Department are among the initial 41 names engraved on the memorial being unveiled today adjacent to “The Rising.”  We applaud Westchester County Executive George Latimer for recognizing that a memorial in the honor of those 9/11 first responders that resided and/or worked or volunteered for Westchester County Agencies and who lost their lives to 9/11 related illnesses was long overdue.  The collaboration between County Executive Latimer, his team and this Memorial Committee has had one goal from the beginning, to “Never Forget.”  Unfortunately, we expect the number of names here to at least double in size by next year once we capture all that have been lost who are associated with Westchester County.  Again, we thank County Executive Latimer for understanding the sobering truth and reality that this memorial will continue to grow in size for decades to come.  By supporting this Memorial Committee’s vision, he, along with the rest of the County, has ensured that 9/11 First Responders from Westchester County will never be forgotten.”

Following the public unveiling of the new memorial, an Eternal Light was lit. A light that will shine 24/7 over the memorial as a testament to the light shone over this County by the heroes this monument is dedicated to.

Names read of those lost to 9/11 Related Illnesses:

The tribute concluded with a moment of silence, flyover by County Police and a performance of Taps by Mount Pleasant Police Officer Peter Blume.

News courtesy of the office of the Westchester County Executive.