In commemoration of the third anniversary of the Sandy Hook Elementary School tragedy, and in remembrance of the 90,000 American victims of gun violence since December 2012, First Congregational Church in Chappaqua, NY, is joining the Newtown Foundation and Faiths United to Prevent Gun Violence in a nationwide vigil service to #EndGunViolence. The Interfaith Vigil for Victims of Gun Violence at First Congregational Church will take place on Sunday, December 13, 4 p.m.

“Through prayer, song, the ringing of bells, and candlelight, the service is intended to give a voice to all victims and survivors of gun violence,” stated Rev. Martha Jacobs, Senior Minister, First Congregational Church.

The Chappaqua Vigil is one of hundreds of local vigils being held in 39 states around the nation.

Survivors, elected officials, faith leaders, and others in the community will gather together to honor all victims of gun violence. Survivors and family members of victims will talk first-hand about the lifelong pain it creates.

Since that tragic day in December 2012 approximately 90,000 lives have been needlessly cut short due to the public health crisis of gun violence. So far in 2015 there has been on average at least one mass shooting per day (4 or more people shot in one incident), and more than 1,000 since the Sandy Hook shooting[i]. More preschoolers are shot dead than are police killed in the line of fire[ii].

Chappaqua Cares, a not for profit connecting philanthropic organizations, is co-sponsoring the vigil.
“We mourn for all victims of gun violence and believe it is vital to support family and friends suffering the loss of their loved ones every day for the rest of their lives. The ripple effect of gun violence cannot be understated,” said Dawn Greenberg, founder, Chappaqua Cares.

Inside Chappaqua and Inside Armonk Magazines is the media partner for the event.

The organizers expect a large turnout in the face of horrific mass shootings in Colorado Springs and San Bernardino over the past two weeks.

–First Congregational Church has been serving the greater Chappaqua community for over 100 years. It is affiliated with the United Church of Christ and is an Open and Affirming congregation.
http://www.fcc-chappaqua.org/
–The Newtown Foundation is a Newtown-based, all volunteer organization formed after the Sandy Hook Elementary School shootings. Our mission is “To provide comfort, education, scholarship and other support and resources to people and communities impacted by, and living or growing up among or in the aftermath, of violence in American society; and to help them lead the way toward positive cultural change over the long term.”
http://newtownaction.org/newtown-foundation/.
-Faiths United to Prevent Gun Violence is a diverse coalition of more than 50 denominations and faith-based organizations united by the call of our faiths to confront America’s gun violence epidemic and to rally support for policies that reduce death and injury from gunfire. http://faithsunited.org. 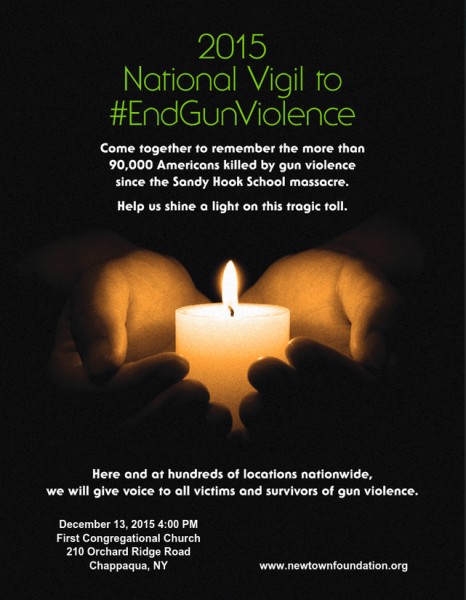