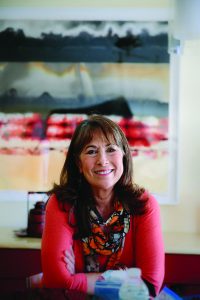 In 2002, Marian Hamilton, a guidebook writer, community volunteer, and mother of two teenage daughters, took on a new role. Her husband, Ken Hamilton, was diagnosed with mesothelioma, a fatal form of cancer, and she became his primary caregiver. Ken’s illness and her role as a caregiver left a lasting impact on Hamilton, and in 2005, she founded the Ken Hamilton Caregivers Center at Northern Westchester Hospital.

“People do not consider the physical, emotional, and financial toll that illness can take on the caregiver,” states Hamilton, who gained 20 pounds, went on anti-depressants, and wound up in the hospital, several times from exhaustion and depression. Hamilton’s husband was in four different hospitals in the New York metropolitan area. In addition to that non-stop stress, they had two teenage daughters at home.

When Ken passed away in 2004, Hamilton needed a change. The author of The Best of Westchester and The Best Things in New York Are Free was an active community volunteer who was serving on the Mount Kisco Child Care Board and co-chairing the Armonk Outdoor Art Show. But she needed to do something different; she decided to find a way to give caregivers the help that she couldn’t find throughout her husband’s illness.

Hamilton understood, firsthand, that caregivers need guidance and sounding boards, help navigating the hospital and medical world, and need to escape the sounds and smells of the hospital, even momentarily. In 2005, she approached Joel Seligman, President of the Northern Westchester Hospital. She made a presentation to his administrative team. She said, “They saw a need to help hospitals take care of families, but they were not financially equipped to do it.” Hamilton quickly implemented a fundraising campaign, and within six months she raised approximately $500,000 towards this project.

In January 2006, Hamilton and three volunteers started working with families. While the center was not yet built, they were able to implement a program to help families in need. Today, 10 years later, there is a physical center with over 30 volunteers and two social workers employed by the Ken Hamilton Caregivers Center. In the past 10 years, volunteers and social workers have interacted with over 50,000 families. “We make connections with families so that they do not feel isolated, we provide an extra set of ears during meetings with the medical team, we provide information on healthcare proxies and living wills, we help caregivers speak to children about illness, and we provide family meetings to help with care plans,” says Hamilton. And this is just a handful of the services that the center provides. They also offer bereavement counseling, support for caregivers with patients living at home, and a “Stay in Touch Program,” designed to follow up with caregivers after patients leave the hospital. “We don’t want caregivers to feel isolated,” stresses Hamilton.

Hamilton, who currently works part-time as the overseer and as a volunteer at the Ken Hamilton Caregivers Center, has taken her model to other hospitals as well. Now over 11 hospitals have their own fully independent caregiver centers. From White Plains Hospital in Westchester County to Mercy Medical in Iowa, hospitals are replicating Hamilton’s model to “provide more respite care for families.”

“We make connections with families so that they do not feel isolated, we provide an extra set of ears during meetings with the medical team, we provide information on healthcare proxies and living wills, we help caregivers speak to children about illness, and we provide family meetings to help with care plans,” says Hamilton.

Since its inception, the center has received seven awards, including the 2006 Planetree National Spirit of Caring Award for Best Program for Family Friends and Social Support and the 2014 Caregiver Action Network: Top Caregiver award for Excellence in Patient and Family Engagement. This year, Hamilton was personally honored with the 2016 L’Oreal Women of Worth Award. Hamilton, one of 6,200 nominees, is one of the top 10 honorees and earned a $10,000 grant for the Ken Hamilton Caregivers Center.

Going forward, Hamilton hopes to continue to make a difference in the lives of caregivers, noting, “Caregivers are a silent population in this country. Over 65 million people–29 percent of the population– are currently providing care to a loved one.” That is an overwhelming number of people who would greatly benefit from a connection to the Ken Hamilton Caregivers Center.

Deborah Notis is a writer and co-owner of gamechangernow.com, a free referral service connecting Westchester families to highly qualified instructors. Her writing can be found in the Inside publications as well as on suburbanmisfitmom.com.