Sherman Oaks, California–Autism and animation fit together like a hand in glove. For 21-year-old Michael Yochim, who was diagnosed with autism as a toddler, growing up with cartoons taught him just about everything he needed to know about life. “I was very much fond of watching anime and cartoons,” says Michael, who enrolled in an art class in high school where he was known for his bandana-wearing cat sketches. “I enjoyed (animation) so much, that I wanted to somehow bring that work to life,” he says. 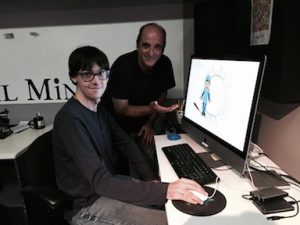 Soon after high school, Michael decided to become an animation artist and enrolled in Exceptional Minds vocational school for young adults with autism.
Now, thanks to seed money put up by an anonymous donor for a new animation addition to the Exceptional Minds Studio (EMS)–a flourishing visual effects studio–Michael is not only able to bring his characters to life, but he could very well get paid to do so.

“I’m very grateful to them for realizing the level of animation talent here at Exceptional Minds,” says Exceptional Minds Animation Director and Instructor Howie Hoffman, who has a wide variety of experience in creating animated content for Nickelodeon, Warner Bros, Disney Channel and Cartoon Network, among others. The donor is an animation studio that chose to remain anonymous. “They understand the unique talents of artists with ‘cartoon souls.’ Their generous investment in EM animators echoes the philosophy of Exceptional Minds to place this population of young animators with autism into jobs that fit them, rather than put round pegs into square holes.”

Exceptional Minds Studio (EMS) is a nonprofit, working studio staffed by Exceptional Minds graduates, who have completed the vocational school’s three year program preparing young adults with autism for careers in visual effects, animation and other digital arts fields. EMS has a close working relationship with the visual effects industry and is well-known for its visual effects and title work on movies such as “Ant-Man,” “Avengers: Age of Ultron,” “Dawn of the Planet of the Apes,” and “American Hustle.”

Now, with this generous donation, EMS artists will be able to take in paid contract work as well as develop content in the field of character animation. The money gift will help accommodate this new animation division that is part of Exceptional Minds Studio’s recent expansion into a new 1,100-square-foot facility located in the same building as Exceptional Minds. The nonprofit is accepting donations at this time to continue its expansion.

Currently, the majority of the nation’s 3.5 million people with autism are unemployed or underemployed, according to government statistics. More than 500,000 U.S. children impacted by autism will enter adulthood during this decade, with one in 68 children to follow.

Exceptional Minds is the only vocational school and working studio to prepare and successfully place young men and women with autism in careers in the fields of animation and visual effects. “I believe that there are no boundaries to what can be said or done in animation. Unlike other forms of entertainment, animation can also be a very personal experience,” says Michael.

Michael Yochim is expected to complete his final year at Exceptional Minds school next spring, at which time he will go on to pursue a career in animation either through direct employment or through EMS.

About Exceptional Minds (http://www.exceptionalmindsstudio.org): Exceptional Minds is a non-profit vocational center and working production studio for young adults on the autism spectrum. It was chartered in 2011 to provide the training necessary for creatively gifted individuals with Autism Spectrum Disorders (ASD) who may not otherwise be able to make the transition from high school to careers. Exceptional Minds offers technical proficiency and work readiness training that prepares students for careers in graphic arts, animation, web design, visual effects and rotoscoping. Located in Sherman Oaks, California, Exceptional Minds is both an instructional learning facility and a working studio with hands-on student involvement in production projects, many for the film industry.

Editor’s Note: This story was provided by Exceptional Minds as a courtesy to The Inside Press.