Tanvi Prasad is a junior at Horace Greeley High School who plays varsity softball and volleyball, and who also studies dance. She has been fond of writing from a young age and hopes to pursue a career in law. 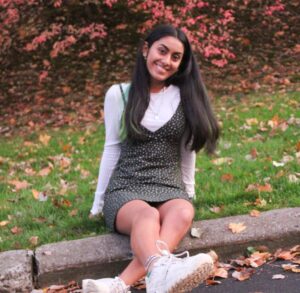 Our planet has spent decades relentlessly battling a disease
She cries acidic tears and rages in blazing fires
Her regal glaciers have begun to crumble and liquify
If you listen closely you can hear her screams of anguish
Her body is bruised and broken, she is frail
Cracks stretch across her like veins, only they carry toxins
Her vast oceans boil under the scorching sun beams that pierce the ozone layer
Her ravishing beauty fades from golden to a tarnished brown
Still she fights

Her illness only strengthens its grip, clawing deep at her fertile soil
She gasps for the crisp air she once had, but only inhales methane
Her lungs turn black
scorched, bulldozed, tarred, and polluted with oil
The vibrant watercolors that painted her flora and fauna are replace by charcoal
Years pass and her symptoms go unnoticed
The fruit of her womb continues to poison her
Still she fights

Seven years, seven years left to fight this sickness, seven years to reverse the damage
If no cure is found she will cease to exist
The root of her infection has been identified, it’s an autoimmune disorder
Humans.
This toxic disease spreads exponentially, seven billion antigens
They have waged war on her, drilled into her heart, and remolded her body
Her amputated limbs have been replaced with mechanics
They have redressed her in piles of waste
Smothering her in plastic bags, forgotten pieces of cloth, and old tires
Still she fights

How she used smile incandescently
through the millions of sparkles in the black night
Draped silky tunics
made of the horizons tropical hues
Laughed angelically
in the light breeze that brushes autumn’s leaves and the soft patter of snow
She danced rhythmically, doing the…
Scorching salsa of the equator, gelid gallop of the Arctic, and balmy ballet of the temperate zone
Now her mountainous knees are weak
Her bones have been impaled with fracking poles, and irrigation pipes
Her satin skirts are shredded and stained
Still she fights