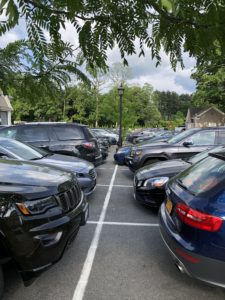 If you have had difficulty finding a parking spot in Armonk or Chappaqua, you are not alone. As both towns have grown, so too have parking problems. Add in the popularity of larger vehicles and SUVs, and parking space is at a premium.

With new businesses coming into the towns and ongoing construction (such as on lower King Street in Chappaqua), finding a spot can be tricky. This is especially true by the train station and in merchant spacing in Chappaqua and on Main Street and at the DeCicco’s lot in Armonk.

The parking limitations make it necessary for the towns to be vigilant about enforcing parking regulations. Community Service Worker Manny Antoniou, who is in charge of parking and traffic in Chappaqua, says the primary reason he issues tickets is for being in a spot too long. He is often stopped by people searching for a spot and suggests that they try the back of the commuter lot where you can pay by plate. He knows that adding more spaces would be the obvious solution but recognized that improving the parking situation needed to be done by “research and survey,” a process which could take a while.

Other parking violations for which he tickets include parking in two spaces, parking too far from the curb, or in a handicapped spot or fire zone. When asked about whether people who park in two spaces do purposely or not, Antoniou responded that, “Sometimes the offender is simply in a rush but sometimes they do it intentionally to protect a new car from dings.” Antoniou said he can “usually tell” the intentions a parking spot hog has and uses his discretion to ticket. He also urged people to stay off their phones and to “not ignore officers when they are directing traffic.”

In Armonk, the parking situation is not much better. During the midday hours, you may find yourself circling the DeCicco’s lot or scanning Main Street as you drive by in hopes of finding a vacant spot. One store owner in town, who wished to remain anonymous, said, “The biggest problem we have in Armonk is employees parking on Main Street. It’s an issue that needs to be addressed.” If you are willing to walk a bit to your destination (especially now that the weather has finally improved), there are often spots available in the CVS lot or the library parking lot.

There is some good news on the horizon though; the town is in the process of adding approximately 80 spots behind and next to the Hergenhan Recreation Center, which should help alleviate the parking situation.

Sergeant Huffnagle of the Town of North Castle Police Department said that although parking is definitely a concern, he has found that most people in town are respectful of the handicapped spots. He also noted that with all the restaurants in town, Armonk has become a “culinary hub” and that means more cars parked for longer periods of time.

The North Castle officer in charge of parking marks tires on Main Street, which has a one-hour time limit during the hours between 7 a.m. and 3 p.m. The parking officer is also the animal control officer, so if he has to leave Main Street to deal with a situation with a coyote, raccoon, deer or other animal, you may get lucky and avoid a ticket if you are in a spot for more than an hour. (It is not recommended that you count on him being away, however.)

There are things you can do to help the parking situation. As a resident of Armonk for 20 years and a self-proclaimed parking lot maven, below are some helpful tips:

Pull out of your spot in a timely fashion. We all have the urge to check our phones and I know I am not alone in having replied to a text or two while sitting in my car. However, when I have to respond to a text (like when my son asks me to pick him up at school), I try to keep it brief. Composing a 2,000-word e-mail, flat ironing your hair, putting on make-up, or reading a book while someone is waiting for your spot is not cool and will not earn you the Citizen of the Year award.

Leave enough space between your car and the car next to you. Not being as thin as I used to be, when someone parks too close to my car I have had to slither in to the driver’s seat, as well as enter my car through the passenger side, which requires a level of flexibility I do not really possess.

Give cars spaces to parallel park. You can make fun of how badly someone parallel parks, but only after you give them enough room to get into a spot.

To avoid accidents Sergeant Huffnagle wants to remind citizens to “use their signals” when they are planning to park so other drivers are aware of their intentions.

Allow pedestrians to cross the street. We are small friendly towns; Armonk is Frosty the Snowman’s birthplace, for goodness sake. You won’t melt in the ten seconds it takes for someone to cross from the Post Office to Hickory & Tweed.

Huffnagle stated that he thinks people typically do not intend to be discourteous and that most problems arise because, “People are in their own little world and can be oblivious to other peoples’ concerns and time constraints.” I agree and believe that we can each do our part to make the parking and traffic situations in our towns much better.