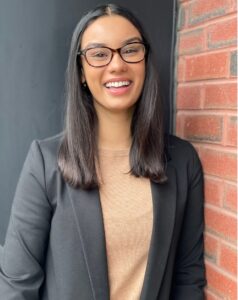 Chappaqua has had its fair share of well- known residents in the White House but there’s a young rising star there with Chappaqua roots who perhaps you’ve never heard of – meet Dhara Nayyar, a 2014 Horace Greeley High School graduate. Nayyar is the White House Regional Communications Director for the southern half of the United States. In this role, she serves as a spokesperson on the White House agenda, working with state, local and national reporters. From January 2021 to December 2021, she was on the research team in the Executive Office of the President where she worked to protect and defend President Biden and his legacy, including developing a 25,000 page opposition book on Mike Pence for the Biden-Harris presidential campaign.

A quick thinker, effective communicator and skilled researcher, Nayyar is often tasked with fact checking and issuing a rapid response when stories come out that are inaccurate or lack context. For example, if a story on high gas prices is being written, her team will provide information to the media about what President Biden has done over his career to help alleviate the problem and what harmful actions the GOP has taken that could exacerbate the issue. The job is 24/7 but Nayyar has had a passion for politics since she was a young girl. “I’ve always known I wanted to go into politics. I remember asking my parents why the president wasn’t a woman –and them telling me that it was because it was my job to fulfill! It’s actually both heartwarming and hilarious to look back and see old elementary school assignments about my dream job where I wrote about working in the White House. I still have to pinch myself to believe that I’m even here!” Nayyar exclaims.

She often attends press briefings at the White House and interacts with President Biden regularly. Working with state and local reporters, Nayyar spends time staffing interviews both in person and via Zoom on President Biden and his administration’s agenda which can include pitching stories, holding press calls and responding to inquiries. While others might find the work intense and high pressure, Nayyar says she is constantly on her toes and she loves it. “I truly live for the hustle and bustle,” she notes.

Nayyar developed a love for writing and communications while working on The Greeley Tribune. “It taught me the importance of always keeping a pulse on the news cycle,” she said. She was also president of Cooking for a Cause, which prepared soup for Midnight Run and held bake sales for charities. “This helped me fuel my passion for public service,” she adds. While at Greeley, she formed a close relationship with Gary Lanza, who was an audio-visual technician at Greeley and served as a mentor. “He instilled in me to always be true to myself, to chase my dreams, and the value of genuine human connection,” she commented.

After Greeley, Nayyar attended American University in Washington DC where she obtained a Bachelors in an Interdisciplinary Studies program focusing on communications, legal institutions, economics and government. Nayyar has no plans of leaving DC anytime soon. In fact, she hopes to run for office one day. “I haven’t decided when. I just know it’s down the line for me!”

As a first generation American in the White House, Nayyar credits her parents Johanna and Ajay as key influencers in her decision to pursue her dreams. “They instilled in me at a young age to find passion in the process and to never take anything for granted but rather to enjoy each moment at face value… On a lighter note–my mom always jokes I got the “gift of the gab” from my father–which certainly helps me in the communications world where I spend 98% of the time interacting with others,” she jokes.

Nayyar, like so many of us in this town, is also in awe of Chappaqua’s most famous residents, The Clintons. She met Secretary Clinton at the Women’s Leadership Forum in 2016. “I am definitely inspired by Secretary Clinton and former President Clinton… they are embodiments of grace, knowledge, and courage,” she said. After communicating with Nayyar for this article, something tells me she’ll be following in their footsteps to a top position in the White House in the not-too-distant future.