Peter Somogyi, a survivor of Auschwitz-Birkenau and victim of Nazi experiments on twins, still grieves as he bears witness to the unimaginable. 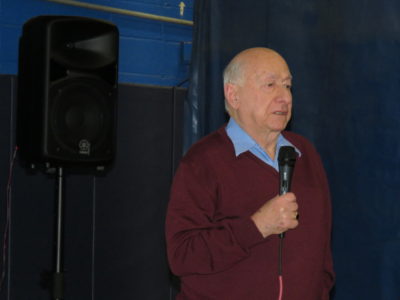 Mount Kisco–Peter Somogyi , a survivor of Auschwitz-Birkenau, was 11-years-old when he and his twin brother Tamas were ‘selected’ and imprisoned as concentration camp victims and subject to the horrific ‘human experiments’ performed by the notorious Josef Mengele (“the Angel of Death”) and others. Somogyi, now 85 years old, said he would not talk about his imprisonment or experiences for decades.

But at the Boys and Girls Club of Northern Westchester BGCNW on January 7, Somogyi, a member of the Speaker’s Bureau for the Holocaust and Human Rights Education Center for the last four years, relayed his memories to attendees.

Opening the program, Alyzza Ozer, BGCNW’s executive director, said that Somogyi’s talk was the Club’s first in a Civic Advocacy speaker series within ‘Youth for Unity,’ a program launched at BGCNW, which serves 500-800 kids a day, ages 3-18 (nationwide, some 4.2 to 4.3 million). The Club’s mission, she said, is to inspire and enable all youth to be best they can be and advocate on behalf of the community.

Introducing Somogyi were Aaron Notis and Jason Fine, Horace Greeley High School juniors who are volunteering with the HHREC to bring lectures about the Holocaust and genocide to wider audiences. They said they got involved due to a scourge of modern day anti-Semitism and bigotry. They noted that 900 hate incidents were reported across the U.S. in the 10 days following the 2016 election. Those attacks included vandals drawing swastikas on a synagogue, schools, cars and driveways. They pointed out the now infamous march of white supremacists in Charlottesville last October and their anti-Semitic chant. They also expressed concern over a growing, so called BDS movement that veers into anti-Semitism.

Finally, they cited reasons why people of every race and religion need to be aware of exactly what happened during the Holocaust. “In Germany in the 1930’s, the Nuremberg laws institutionalized the racial theories commonly held by Nazis. The laws excluded German Jews from Reich citizenship and prohibited them from marrying or getting involved with persons of “German or related blood.” Jews were stripped of their German citizenship. They could not own businesses or do business with non-Jews. Jewish children could no longer attend their schools. Jewish doctors could no longer treat non-Jews, and Jews could no longer go to non-Jewish doctors. And this was just the beginning of the prejudices and horrors that Jews encountered.”

“Somogyi’s Journey” began on March 14, 1944, when the Nazis invaded Hungary. Within two weeks, he recalled the required wearing of yellow stars and people being beaten up on the streets. The Jews were pushed into a ghetto with families living in single rooms confused and beset with fear. Shortly after, roundups began for deportation. “We were told to take only what we can from the ghetto. They gave us some bread but no water whatsoever. It was chaos. Children were crying. All of us…we didn’t know what was happening. On arrival at Auschwitz, exhausted and terrified, anyone ‘able bodied’ was ordered to one side, he explained, and older people and children to the other. “Then along came Mengele asking for twins… they grabbed us. We never had a chance to say goodbye.” 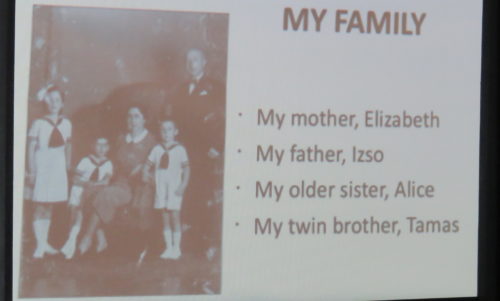 He remembered that his sister Alice was “forced to undress naked” and led with others into a room that was “supposed to be a shower,” he said of the infamous gas chamber, the largest room of the crematorium at Auschwitz, in which hundreds of thousands of Jewish men, women, children and political prisoners perished. “No one knew that in ten minutes they would all be dead.,” said Somogyi. Some were lucky and died instantly.” He explained how “those who had climbed to the top of bodies in a kind of pyramid, took longer. Within ten minutes, they all died.”

While Alice and his mother Elizabeth and hundreds of others were murdered following that single ‘selection,’ those chosen to ‘work’ were forcibly ‘tattooed’ and told their new identities would be a number. Somoygi showed and recited his own: A74454455. Inside the barracks, the prisoners were assigned six to “a bed” made of tiers of wood planks. There, that night, he learned of his sister’s fate and of the genocide taking place. “We smelled the stench of burning bodies, the flames going up 10-15 feet out of the chimney. The persons who worked at the crematoriums were replaced every two to three months, and gassed themselves, so there would be no eyewitnesses.”

The so called ‘experiments’ began. Mengele was in fact one of dozens of ‘physicians’ participating in this torture. “They were taking blood all the time and measuring everything.” (A slide indicated the victims were injected with unknown substances; a second slide pointed to an experiment which intended to determine how long someone can survive without eating.) “I remember one dwarf (another segment of the population the Nazis targeted for experimentation) “got really, really sick. One morning I had a cold body next to me. Every day, there were six to ten people who died and they lined the bodies up like cinder sticks…” 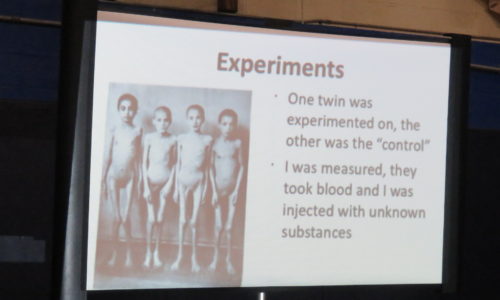 Somogyi said that the twins considered their horrible situation ironically life saving (“although I hate to call it that,” he said) in that they were of some “use” and despite that the twins and others chosen to be experimented on lived in abject fear “wondering when Mengele would decide he didn’t need us anymore.” They knew that “any moment, any time, we could go to the gas chamber like the others.’  In addition, many of those subject to the experimentation died as a consequence of them; others were murdered in order to facilitate post-mortem examination, according to a document from the United States Holocaust Memorial Museum.

By January, 1945, the Nazis had already lost the war on many fronts. “On January 27, we saw our first Russian soldier,” Somogyi said. “Imagine an 11-year-old thinking, when is my time to die? And then, finally, I am free. You don’t know what kind of feeling that is.”  His brother Tamas survived as well. In time, he discovered that his father Izso had survived Dachau.

He described a journey back first to Budapest (he and Tamas were reunited with their father with a neighbor’s aid in Hungrary) and then to Israel (where he became an officer in the army), from where he left to England, and finally, to the United States.

Somogyi expressed his grief over lost family and friends, stating:  “Why did they have to die? We were persecuted only because we were Jewish.”

Many of the survivors, he explained, could not talk to anyone about what happened for a very long time. As a young man, “a blind date asked me about my number. I asked her never to ask me again.”

Like many survivors, Somogyi found the inner strength to reinvent his life. He has been married for 56 years to Anna with two children and grandchildren. On one post-war trip in 1990 back to his hometown Pecs in Hungary, he said, “It felt so strange. And I was happy to get away.” “Today,” he offered, “there are people who say this never happened. In 10-15 years, there will be no survivors. I’m here to tell the world that it DID happen, and it’s very lucky I survived.” 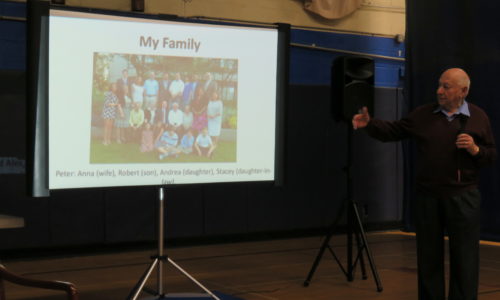 At the end of his talk, Shantae Artis, BGCNW’s Community Volunteer Coordinator, commended Somogyi for his openness. “We need to bear witness,” she told the crowd who came out in single digit temperatures to hear him. “Empathy and compassion are tools we need to have to prevent future tragedies so that we never ever have to bear witness again like this.” 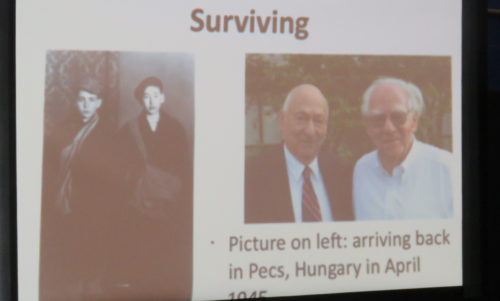 Bearing witness continues when the BGCNW on March 4th at 7 p.m. welcomes guest speaker Rita Kabali Wagener, a survivor under the regime of Idi Amin in Uganda. Do mark your calendar.

Grace Bennett is publisher and editor in chief of the Inside Press, and the 2017 recipient of the Holocaust and Human Rights Education Center’s Bernard Rosenshein ‘Courage to Care’ award. For more information and membership info about the Boys and Girls Club of Northern Westchester, please visit bgcnw.com, and for same at the HHREC, please visit hhrecny.org.