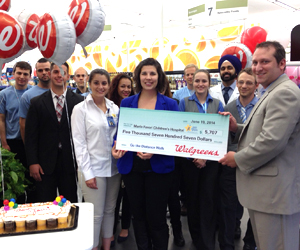 This past Thursday, Eric Buff, manager of Chappaqua’s Walgreens, proudly presented the Maria Fareri Children’s Hospital with a check for $5,707.

The store’s contribution was the second highest in the county at the close of a recent fundraising campaign (raising $350,000) undertaken by the hospital.

Buff partnered with the Walgreens in Thornwood to gather the dollars after setting up scannable coupons—area customers shopping at the two stores generously rose to the occasion with their donations, making  the nearly $6,000 raised possible.

“As a company, we try to get as involved as we can because we have a vested interest in the health and wellness of our customers and the community at large,” said Buff. “Our employees were  also behind us 100 percent which made all the difference.”

Speaking on behalf of Maria Fareri Hospital, Kelli Teglas noted: “Walgreens was a pleasure to work with. They really stepped up and got their employees on board and we are just very grateful.”

The fundraising efforts were also a natural outgrowth of an established relationship with Westchester Medical Center via a “bedside delivery system” in place with WMC.  Prescriptions are filled and as a convenience delivered to the hospital campus with the pharmacist’s instructions.

“Nurses or social workers coordinate with our pharmacy to go over the use of the medications with patients,” explained Supendeep Dosanoh, Walgreen’s pharmacy manager in Chappaqua. “These efforts are critical toward helping decrease the readmission rate at the hospital,” he said.