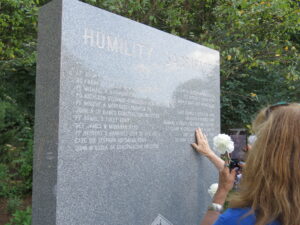 Each stone is etched with the names of the Westchester first responders lost to 9/11 related illnesses.

Under a blue sky and perfect temperatures in Kensico Dam Plaza, at the foot of The Rising, also a 9/11 memorial,  family members and friends shed tears, exchanged stories… and also touched the names of lost loved ones, all recognized as heroes, names etched in white into two new granite stone memorials, unveiled by County officials, 20 years after 9/11.

Family members pointed to or ran fingers lovingly along a name, lingering sometimes… to reflect and remember.

Each family member also received a bouquet of flowers, and soon red and white flowers lay gently below the memorials in respect. The private unveiling preceded tomorrow’s public ceremony at 3:30.  Additional information from the County about these new Memorials, a million dollar effort long in the making, follows. –– Grace Bennett

Said County Executive George Latimer: “This memorial is the culmination of a promise this County government made to the families and loved ones of these true Westchester heroes. We will not ever take for granted the actions of these individuals and hope that each person who visits this memorial understands their lasting impact.”

The new memorial  is made up of granite stones set on a stone veneer wall. Each stone is etched with the names of the Westchester first responders lost to 9/11 related illnesses.  The Westchester County 9/11 First Responders Memorial is designed to complement the stonework of the Dam and surround The Rising as an eternal watch. 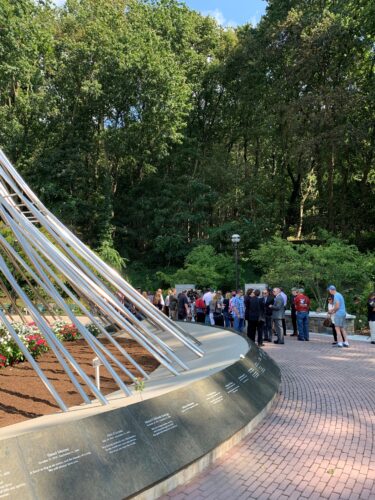 The total length of each wall is 20’ and will hold up to 4 4’ long memorial stones each, for a total of 8 memorial stones. A light – which will be known as the Eternal Light – is centered between the two walls and directly across the entrance to the original memorial, The Rising.  This light will be on 24/7 to signify the light shone on the County by those this memorial intends to honor.

Construction of this solemn memorial was done by R. Pugni and Sons, Inc.  The design of the memorial was completed by a combination of the County’s dedicated Department of Planning. Department of Parks, Recreation & Conservation and a committee made up of loved ones of those lost to 9/11 related illnesses. The committee, was co-chaired by New York City Police Officer Matthew J. McCauley and NYPD Sargent Peter Woods who lost his battle to a 9/11 related illness earlier this year.

McCauley said: “On the eve of the 20th Anniversary of the September 11th terrorist attacks we are reminded of the nearly 3,000 lives that were lost that day, including those from Westchester County who are memorialized at “The Rising.”  Unfortunately, the toll of those lost continues to increase due to 9/11 related illnesses that have claimed so many of our 9/11 First Responders.  Again, Westchester County has seen far too many lost to 9/11 illnesses.  As the Co-Chair of a Committee made up widows, children, other family members, friends and first responders themselves, we applaud Westchester County Executive George Latimer and his team for supporting our vision and desire to have a memorial for those 9/11 First Responders that worked or resided in county, who have died of illnesses they developed as a result of their heroic actions in the aftermath of the September 11th terrorist attacks.  This permanent memorial alongside “The Rising” will ensure that the sacrifice of all lost that day and thereafter is never forgotten.”

The committee, who the County owes a debt of gratitude to for their dedicated work, is made up of:

This committee, through the height of the COVID-19 pandemic, met regularly to plan this new memorial. The work done by them, to honor their loved ones, will be forever cherished by the people of Westchester County. Following this private unveiling for families, Latimer and first responders from the region, will fully unveil the memorial to the public during the County’s 9/11 ceremony the following day at 3:30p.m.

The full list of names included in this first round of engraving include: