My name is Maddie Stone. I am 13-years-old. As a kid, I know how special it feels to open the mailbox and discover a birthday card, party invitation, or a note of some kind. In fact, this spring, my English teacher at Fox Lane Middle School posted an optional word game assignment on our online learning platform. It was a lazy Friday, so I decided to play for fun. I did really well, and earned the highest score. It was cool, but I didn’t think much of it. A few days later, I opened my mailbox to a surprise. It was a letter from my English teacher. I tore open the envelope and found the nicest note congratulating me on my score (even better, there was a lollipop attached!). During a time of substantial stress and worry, it was truly nice to receive something so kind. But here is my point: this note would not have been nearly as special over email. 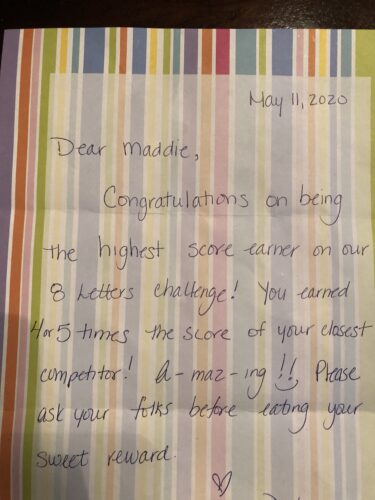 “We deliver packages, we deliver prescriptions, we deliver, for example, masks, which we need to cope with the pandemic, and we also are a way of communicating,” commented Millwood Post Office Postmaster General Susan Scholl. “Someone can communicate with a family member or a loved one being that we are under the strict guidelines to be quarantined.”

Unfortunately, too many of us take the U.S. Post Office for granted even though so much we should appreciate arrives in the mail–life-saving medical equipment, critical paychecks, letters from far away relatives, and so much more. Almost everything we need can be mailed to us in an envelope or a cardboard box. This is especially important to poor and elderly communities that may not have access to technology millions of other Americans enjoy without much consideration. The fact of the matter is the post office provides us with many services we may not be sufficiently thankful for, and it’s up to us to advocate for its continued support as the agency faces threat. A large part of this threat is that many people have found technological substitutes for tasks they may have once completed over mail, but it does not help that politicians are constantly belittling the post office. President Donald Trump told reporters in April the post office is “a joke.” He has also threatened to block the Postal Service from COVID-19 relief funds unless it begins charging large customers a whopping four times as much as current package rates. Needless to say, blocking the funds would be catastrophic.

“It is always the case that reaching voters by mail is essential even more so now when greeting voters at their doors or at train stations is inadvisable, but also the mail right now plays an exceedingly important role in running our elections for this upcoming primary,” observed David Buchwald, 93rd district state assemblyman, who together with candidates Asha Castleberry, David Carlucci, Dr. Evelyn Farkas, Allison Fine, Adam Schleifer, Mondaire Jones and Catherine Parker are the Democrat candidates vying for Congresswoman Nita Lowey’s 17th District chair. According to the League of Women Voters of New Castle, (LWVNC) there are also two candidates in the Republican Primary for the 17th–Yehudis Gottesfeld and Maureen McArdle Schulman. Specifics for candidate events as well as links to voting information, she added, can be found on the LWVNC website:  http://www.lwvnewcastle.org

There are so many reasons to save the post office beyond enabling us to vote in November, as critically important as the voting reason most definitely is. For one, about 470,000 people are career employees at the U.S.P.S. These are people’s jobs we are talking about. Also, perhaps the most obvious reason: we still need the Postal Service! People argue all companies are going entirely digital, but this simply is not true. Many companies, including large corporations we have grown to rely on such as Amazon, still depend on the post office; and by extension, so do we, the customers.

In thinking about which local business owner to interview for this piece, I realized I couldn’t think of an area entrepreneur who banks on mail service more heavily or for a more vital product than the woman who published the very article you’re currently reading.

“Basically, if the U.S Post Office closed,” said Grace Bennett, publisher/editor of The Inside Press, “it could mean the end of at least the print end of my business.” The magazines have always been a huge ‘selling point,’ in their ability to reach its audience by mail, and at a reduced shipping cost,” explained Bennett.

In addition, direct mail catalogues and flyers on everything and everyone from dry cleaning to jewelers would impact business strategies perhaps to such a degree where  the business owner may worry they may not adapt their business model adequately or in enough time if the agency were to close or shrink to an unrecognizably small size.

“The lives of the American people have changed dramatically over the last two months,” said Northeast Area U.S. Postal Service Spokesperson George B. Flood. “In the midst of the constant upheaval, one constant has been our employees’ commitment to fulfilling the vital public service mission of the Postal Service. Whether it be the letters or packages containing much needed medicine, goods, benefit checks, test kits, or important information, postal employees continued to deliver every day for the American people.”

Hopefully these inspirational words from Flood will motivate people to support the Postal Service, and, along with it, every business, organization and individual that relies on such a critical agency.

Maddie Stone is 13 years old. She lives in New Castle and is a 7th grader at Fox Lane Middle School. She loves playing softball and reading books.