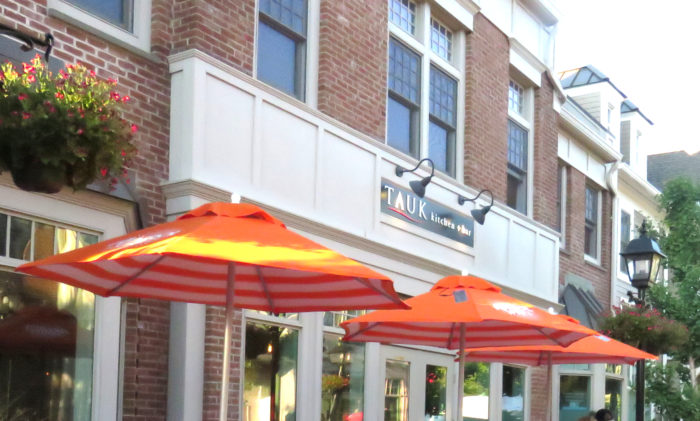 If you are feeling a little sad that the days are starting to get shorter and cooler, there is something you can do about it. A visit to Tauk, a new restaurant in Armonk Square, may be just what you need to help extend your summer and make you feel as if you’re still at the beach.

Francis Leone, an Armonk native, has brought the best of Montauk to his new restaurant, which boasts fresh off the boat fish delivered daily. Born into a restaurant family (his uncle owns the Emilio’s of Morris Park the famous pizzeria and Italian restaurant in the Bronx), Leone credits his uncle for teaching him “everything I know about the business.” And after eating at Tauk a few times, I would say he knows a lot.

The atmosphere at Tauk is relaxed and casual, with the focus on food and fun. Montauk themed artwork adorns the walls inside the bright and inviting interior. There is outdoor seating available, as well. In fact, Tauk boasts one of the largest outdoor seating areas in Armonk. The outdoor patio, designed by Leone himself, will remain open into Fall; outdoor heaters will keep you warm on the cooler Fall evenings. The outdoor area includes couches that make hanging out with friends even more comfortable and inviting.

The varied menu includes small plates like crispy brussel sprouts (the best I’ve ever had), a delicious yellow fin poke bowl served with tortilla chips and pico de gallo and a wild gulf shrimp cocktail served with the house cocktail sauce. Among their farm fresh salads, the golden and red beets salad is the most popular. And what beach themed restaurant would be complete without chowder? Tauk’s salmon chowder is prepared to perfection. There are also a variety of tacos on the menu, including braised beef, chicken, and crispy or grilled cod which are available in flour tortillas or corn shells.

The number one best seller at Tauk is the Montauk lobster roll, which can be ordered warmed and buttered or chilled with tartar sauce. Paired with a glass of cold Montauk beer, you will swear you can almost hear the surf roll on and off the shore and feel an ocean breeze. Other sumptuous entrees include the cod fish and chips, lobster mac and cheese, steak frites and seared wild salmon. Leone also recommends the burger with special Tauk sauce, which is prepared with organic meat and always fresh local ingredients. One of my family members, who is the pickiest of eaters, was thrilled with the crispy, fresh nachos and perfectly prepared Buffalo chicken wings.

For the fall, Tauk will add the Tuna-Wich, a thick tuna sandwich prepared by Chef John Poiarkoff, formerly of Restaurant North. Leone reminisced that “When I was a kid, tuna sandwiches were stuffed thick and every restaurant out in Montauk had its own version of it.” He wanted to recreate that memory with his own version here in Armonk.

If you want to hang out at the bar, Tauk’s is well-stocked with a variety of Montauk craft beers, ale and liquor which complement their many other selections. Leone said he “wanted to bring a piece of Manhattan to town” and the bar menu and vibe reflect that desire. There’s a television so that customers can watch the Food Channel or whatever sports game is on.

The restaurant is more than happy to accommodate dietary restrictions–for example both the tacos and the fish and chips can be made gluten-free, while the brussel sprouts can be made in a vegetarian preparation without bacon. Poiarkoff and his crew are also happy to make modifications on their menu items whenever possible; just speak to your server about any special requests. You will find the staff at Tauk knowledgeable, friendly, attentive and eager to please.

Tauk opens daily for lunch at 11 a.m.; dinner is served until 11 p.m. Monday through Thursday and 9 p.m. on Sundays. (The kitchen is closed between lunch and dinner from 3:00-5:00 p.m.) It’s important to note that Tauk is open until midnight Friday and Saturday, which is perfect for those who prefer to dine on the later side and enjoy a leisurely meal. Reservations are accepted, and take-out is also available.

So, don’t put away your summer whites just yet. If you want to feel as if you’re in Montauk (without the beach traffic) or just looking for a unique dining experience check out Tauk. You won’t be disappointed.