Community is defined as “a feeling of fellowship with others, as a result of sharing common attitudes, interests and goals.” While it’s not hard to find in many places, it can be easier to grow. David Juros and his son, Devon Juros, were eager to change lives through such a simple concept: a community garden.

Most people don’t know that at least one fifth of Westchester County needed food assistance about three or four years ago. Thanks to Devon and David, this number has most likely gone down as the food availability goes up. When Devon, age 11 at the time, heard this statistic in school, he felt the need to take action. Devon and his family had always volunteered together, helped with food preparation for Midnight Run and worked in soup kitchens but it just wasn’t enough. He came up with the idea to make a community garden so that everyone would have food because the garden’s harvests would go to local food pantries.

It took about three years to learn exactly what was needed to garden, let alone funding tasks. Devon and his father had very little experience gardening besides Devon’s grandfather having a veggie garden and other family history of farming. Although Devon did have some knowledge under his belt, there was plenty of learning to do for a larger garden. 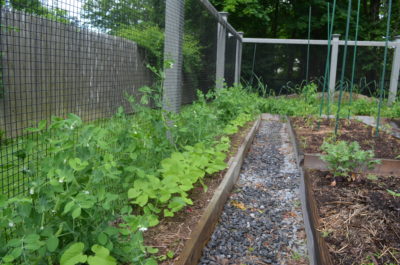 David and Devon also had to raise money and apply for grants, as well as create an organization and gain support from the community all from nothing. Finally, in June of 2014, 100 supporters came together and built the garden and planted the first seeds of the future.

In the community garden, they mostly grow simple foods because people who can’t usually afford such extravagant vegetables don’t really know how to cook with them in the first place. For example, kale is an example because it is both hard to work with, and those who don’t have enough to eat won’t bother their time with it. Good examples include green peas, sugar snap peas, tomatoes, squashes, peppers, and lettuces. They plant peas in early March, which grow until November depending upon the weather. Spinach and carrots can grow in the cold weather.

However, David and Devon don’t do this planting solo. While they usually maintain the garden, they host big events for the community where people can bring their kids and come help out. The community also has the opportunity to “own” the garden for week, meaning they manage it from Sunday to Friday, checking the water levels, weeding and/or harvesting the garden if necessary. David said that this is a good opportunity for families with children, seniors who want gardens but may not have the time or the room, and plenty of teenagers have signed up on their own. “It really teaches the community about growing,” David added.

David has described his work with Devon as an incredible learning process, and is grateful for all the support they’ve received and for the 200 people working in a year who gather food every Saturday and attend food donation events. Together, they have grown over 34,000 pounds of organically grown food, and there are still more people to get involved. The American Community Gardening Association highlights some of the most important purposes of a community garden to be community development, stimulating social interaction, beautifying neighborhoods, producing healthy food, conserving resources and creating opportunities for recreation, exercise and education. “It does so many important things,” David agreed. “It creates a sense of community, adds green to our environment which is very important and it helps to get people more involved in the growing system.” His advice to anyone interested in having a community garden or even their own garden is to go through with it.

David’s last piece of advice to other communities considering a garden: “Devon and I started with no knowledge and I think we’re pretty successful in the way we’ve done it. It only took a few conversations. It’s important for communities to plant fresh food for those who can’t afford it.”

Molly Alexander, a junior in the LIFE School at Horace Greeley High School, is an intern for Inside Chappaqua and Inside Armonk Magazines.