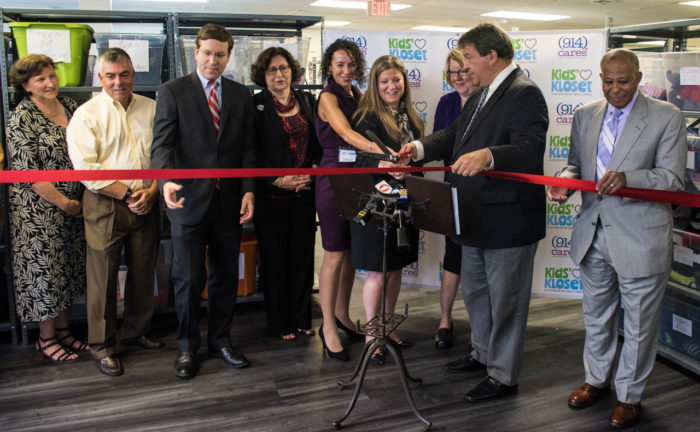 Dedicated volunteers and Westchester County elected officials gathered together for a grand opening ceremony on September 20th to celebrate the new brick and mortar location of non-profit (914) Cares and hail its adoption of Kids’ Kloset. County Executive George Latimer cut the ribbon, marking the official opening of the new site at 901 North Broadway in North White Plains.

(914) Cares, formerly Chappaqua Cares, supports local non-profits that focus on basic human needs, including food, clothing, shelter, medical care and education. The organization was founded in 2014 by Chappaqua residents CEO Jessica Reinmann and Vice Chairman Dawn Greenberg. The two founders believed that there were many people interested in helping others and there were a myriad of charities in need but the missing piece was someone to put them together. They began working with four local organizations and have expanded to partnering with over thirty non-profit groups. (914) Cares places volunteers, coordinates donation drives, and helps local non-profits with fundraising.

“Twenty-five percent of Westchester residents live at or below the poverty line,” says Reinmann. “There are families that cannot feed their children and although they get breakfast and lunch in school through government subsidy, these kids don’t get dinner or anything on the weekends and during school breaks.”

Through their Empty Bowls project, they have raised over $300,000 to fight hunger in Westchester County. At an Empty Bowls event, volunteers create hand-painted bowls. Guests are invited to a simple meal of soup and bread. In exchange for a monetary donation, guests keep the bowl as a reminder of all the empty bowls in the world.

“It’s hard to wrap your arms around the fact that so many local children may not have dinner tonight. It could be the opposing soccer team of your kid.  I think when people get it, they are generous,” says Mary Rosewater, (914) Cares board member and Kids’ Kloset volunteer.

The Kids’ Kloset program, founded by Executive Director Stephanie Roth, provides underprivileged local children with donated clothing and related items.  Since its inception in 2011, Kids’ Kloset has provided over 16,000 bags of clothing, footwear, diapers and more to local children. Volunteers sort donated clothing and pack “bags of love” with appropriate items that are not ripped or stained. They fill orders received from referring partners on the front line that can identify children in need, such as social workers, teachers, or houses of worship. Bags contain about a week’s worth of clothing and are packed based on the child’s size and when possible, color and style preferences.

“We pride ourselves as being somewhat of a first responder to these schools and organizations,” says Volunteer Coordinator Sandee Levinson.

“While we have specific operating hours, there’s not one single one of us who if we got an emergency call that a child is now homeless and needs clothes for school due to a catastrophic fire, who would not jump out of bed to make that happen,” says Rosewater.

“We have so many underserved kids here,“ says Westchester Chairman of the Board of Legislators Benjamin Boykin. “This is a wonderful organization.  If you have clothes that your kids have outgrown and you no longer need, bring it in,” he urges.

The adoption of Kids’ Kloset was the impetus to open the current space. Kids’ Kloset had lost its previous location in White Plains. Friends of the organization worked together to locate a new space that was centrally located. White Plains Attorney Seth Mandelbaum, a land use and zoning specialist, provided pro bono services to shepherd them through the approval process in the Town of North Castle.

North Castle Town Supervisor Mike Schirilo and Deputy Supervisor Stephen D’Angelo were both instrumental in the town approval and glad to have been involved. “It’s an incredible organization and it speaks volumes about the people who are behind this and gives you continued faith in society. With all that noise around us, there are still great people like this doing great things and it reaffirms the goodness in our culture,” says Schirilo.

“This coming together represents what makes Westchester great, not the government of Westchester, but the people of Westchester… who are willing to give their time with no compensation or glory,” says Latimer.

The Mount Kisco Interfaith Food Pantry, which is supported by thirteen different congregations, is one of (914) Cares’ partners. “The values that we all hold so deeply from every religious organization, regardless of the brand name, are truly living out their faith in this and it’s extraordinary,” says Mount Kisco Mayor Gina Picinich.

“Often Westchester can be characterized as a place that doesn’t need help but the reality is that there are folks struggling here just like everywhere else and we want them to be part of the fabric of our communities and so we have to make sure we have services available for them,” says State Assemblyman David Buchwald.

“For someone who wants to help but doesn’t know how, (914) Cares is one-stop shopping,” says board member Haley Ferraro.

For more information on how you can get involved, go to www.914cares.org