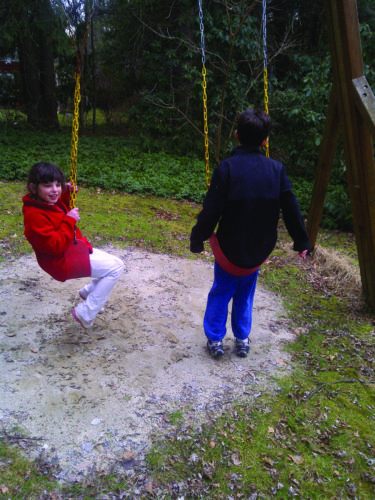 The gardeners took down the swing-set the other day.

Laurie and I had been talking about removing this once vital backyard play-center for at least a year, our main motivation being that it’s under-utilized as our kids have gotten older, and years of Chappaqua weather put a beating on the old wooden war-horse.

Also, my daughter’s best friend is something of a champion swinger and still uses ours. The thought of him pushing the set to its final strained limits and potentially flying feet-first into my already not thrilled neighbor’s yard is not appealing. I’m generally a pragmatic person yet the thought of the swing-set ending has made me reflect upon this slight, yet distinct, turning point for our family.

When the big swing-set was installed years ago the kids were not just a little excited. There were huge plans for the club-house area, big-kid solo climbs up the ladder, the glory of three chain-linked swings (two full, one baby) and, of course, The Orange Slide of Destiny. The first thing we did was set up the kiddie-pool (first of dozens) at the bottom of The Slide. The immediate gratification of sliding head-first, feet first, laying on one’s back, the kowabunga surfing pose, any way at all with the resultant explosive splash was thrilling for the kids (and us)!

Even better, the swing-set became a destination for all of us. The kids could play independently in an old school (no screens!) visceral manner, learn safety lessons and, best of all, we could sit and watch, read and watch, eat and watch, maybe even have a drink and watch. You get the picture.

Before we moved to Chappaqua from the city the thought of being excited about having our own swing-set was something I’d never considered nor cared about in the slightest. Going to the neighborhood park and swinging the kids was a simple pleasure of city living. However, as the Manhattan to Westchester culture-shock ensued I realized that my urban perspective would need some tweaking if I was to adjust to a bucolic life. I remember walking into town with my daughter in a Baby Bjorn, something I’d done a thousand times with both kids in the city, and feeling that somehow this was different. And, it wasn’t only because there weren’t yet sidewalks on 120, and people seemed to be staring.

Part of the conversation about removing the swing-set was what to do with the physical space it once so organically filled. That got me thinking about what I might want as the kids get older. Before Chappaqua I may have envisioned being a gardener Dad. The previous owners left us with a gorgeous cornucopia of flowers, trees and bushes. The thought of working in the yard, being outside and physically maintaining my property was highly appealing. In theory at least. A wise Chappaqua friend quickly advised that doing one’s own yard was “too much work.” I’ll just reiterate that it was the gardeners taking down the swing set recently, not yours truly, so that particular Dad vision faded quickly. 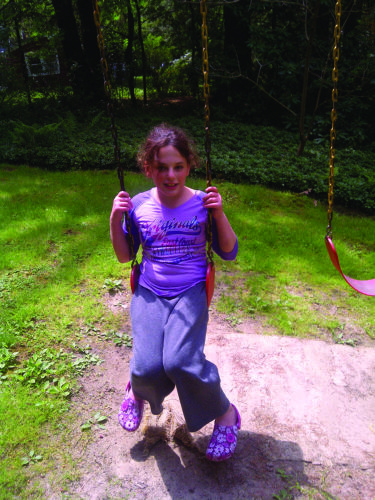 It’s funny how you find yourself reflecting upon something as simple as removing a piece of playground equipment. I texted my son at college and asked him for any memories of the swing-set and I was sure it would be some near miss compound fracture or some crazy sport he invented. His surprising response was remembering coming home from sleepaway camp, sitting on a swing alone and feeling not really sure what to do with himself. Certainly not the image I expected but somehow connected to my swing-related contemplation.

I never really seriously questioned our decision to remove the swing set. I did manage, as I do sometimes, to consider the meaning of these little practical changes in life and found myself thinking a bit about my two great kids and how they’ve evolved. Raising children can really fly by and the symbolism of this small event somehow struck a chord with me.

I envisioned the nuts and bolts being taken out of the foundation of the swing-set, and the hard-weathered wood gently laid upon the ground, leaving a sentimental skeleton of a once thriving play-center that was so central to my family’s life.

I could hear the background music, think “Good Riddance (Time of Your Life)” by Green Day or “Cats in the Cradle” by Harry Chapin, playing as the deconstruction slowly occurred. However, this semi-emotional Viking-funeral fantasy was quickly obliterated when I watched the gardeners take the whole thing down in about two minutes with a chain saw… an emotionally sobering moment for this Dad and probably just in the nick of time!