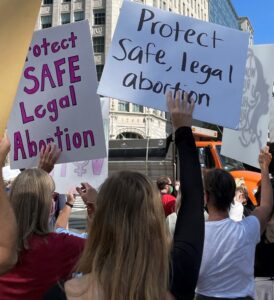 As America prepared to celebrate the anniversary of its independence, pro-choice advocates across the nation mourned what they felt was a step backward in the fight for women’s rights and bodily autonomy.

On June 24, the Supreme Court released its decision on Dobbs v. Jackson Women’s Health Organization, one which overturned the constitutional right to abortion provided by the landmark rulings in Roe v. Wade (1973) and Planned Parenthood v. Casey (1992). Their decision now leaves it up to each state to set their own laws regarding abortion access.

The official ruling reads: “The Constitution does not confer a right to abortion; Roe and Casey are overruled; and the authority to regulate abortion is returned to the people and their elected representatives.”

In the wake of the decision, women’s rights activists and advocates for legal abortion access across the nation have come forward to express their sorrow, frustration, and fear for the future of the nation and American women’s right to control their own futures.

Cheryl Brannan, president and founder of Sister to Sister International, feels that “it’s a travesty.

“A woman should have full autonomy over her body and the absolute right to make a choice. That’s what access to healthcare is all about,” Brannan said. “It’s a travesty to justice and an intrusion on a woman’s personal life. It’s almost like we’re property…Instead of moving forward, we feel we are moving backward.”

As far as steps being taken in our local community, she said that she had recently met with the local board of legislators and supported them in their work to pass legislation that will provide additional protections for women.

Brannan said, “I am happy that here in New York State with our elected officials, they are conscious and savvy enough to know that we need to have legislation that supports women’s ability to choose and have an abortion as wanted, however I do think that it’s important that it’s codified because if not it can be rolled back just like Roe v. Wade was.”

She went on, “This could affect us very negatively if not codified, one, and secondly, especially for low-income women and women of color, coming from other states where it may not be legal, they could certainly make a beeline for New York state, which, of course, would lead to more people coming through the system, which is one drawback of Roe v. Wade being overturned. A lot of women don’t have means to travel to another state, and if they do then of course it’s going to be a lot more people accessing services here locally. No matter how you cut it, it’s not a good thing.”  https://www.s2si.org/

“Obviously, our centers are going to see more volume. We’re not ideally located for most of the states in question who will have issues, the only thing that makes us favorable is that we do have Planned Parenthood at or near most airports, like there’s one near LaGuardia, there’s one near White Plains, but it necessitates flying, which is a tremendous expense,” she said.

Mini Timmaraju, president of national pro-choice advocacy group NARAL Pro-Choice America, said in a statement posted to their website that “the impact on the real lives of real people will be devastating. The Supreme Court has given the green light to extremist state lawmakers who will waste no time springing into action to put in place total bans on abortion…The 8 in 10 Americans who support the legal right to abortion will not let this stand. There is an election in November, and extremist politicians will learn: when you come for our rights, we come for your seats.

“The people who will be hurt most by the Supreme Court’s decision are those who already face barriers to accessing abortion care–including women; Black, Indigenous, and other people of color; those working to make ends meet; the LGBTQ+ community; immigrants; young people; those living in rural communities; and people with disabilities,” Timmaraju said.

She continued: “Leading up to the Supreme Court’s decision and emboldened by the Court’s anti-choice supermajority, extremist state lawmakers doubled down on their attacks on reproductive freedom in an orchestrated effort to undermine our fundamental right to make our own decisions about abortion without political interference. Anti-choice lawmakers have already filed over 500 restrictions on abortion this year, including bans on abortion at 15 weeks of pregnancy, bans before most people know they are pregnant, bans modeled after Texas’ vigilante-enforced ban on abortion, total bans on abortion, and medically unnecessary restrictions on medication abortion care.

“With the legal right to abortion in jeopardy in over half the states in this country and the Supreme Court’s decision making clear that we cannot rely on the courts to protect our fundamental rights, electing candidates who will fight for our freedom to decide is more urgent than ever,” Timmaraju concluded. https://www.prochoiceamerica.org/fight-back-for-our-freedom/

Brannan shared a similar call to action, noting that she “invite[s] people to join our movement. They can do so by emailing us using the contact information on our website, and we will continue to fight. But most importantly, we are encouraging people to register to vote, and we are encouraging them not only to galvanize and make our voices heard in New York state, but also in other parts of the country, because we need to be heard in Congress.”

Chatzky offered ways to get involved both on the local level, by phone banking and supporting pro-choice candidates when it comes time to hit the polls, as well as supporting national organizations in the form of donations or volunteer work.

“The Brigid Alliance is excellent,” she said. “They’re offering funds for transportation for people to move about. AirBnB actually donates a certain number of rooms to people who need medical care if it’s unavailable where they live, so people can look into supporting that. We were looking at trying to establish some sort of house hosting website where you could sign up to become a host and people could find you online for free, including hiring a private investigator to do background checks to ensure that people on both ends will be safe.”  https://brigidalliance.org/

Additionally, Chatzky mentioned organizations which use the assistance of volunteer pilots to help people fly, at no cost, to other states in order to get access to the healthcare they need, Elevated Access being one example.

Brannan, Chatzky, and Timmaraju’s messages all offer similar notions of hope for progress in the face of what they feel is regression for women’s rights in America. They encourage concerned Americans not to give up on fighting for justice or take a passive stance if they live in a state which has not restricted abortion access, but rather to use this as an opportunity to organise and exercise their voices through votes and volunteering in order to create the change they hope to see.