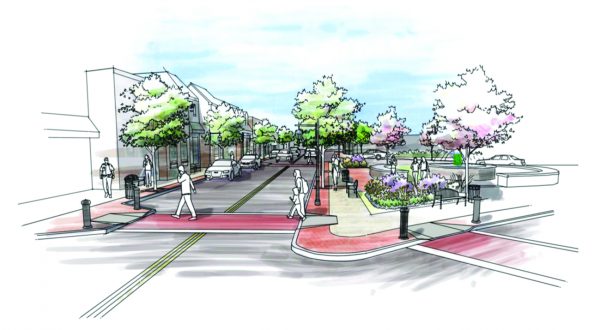 We’ve all heard the saying, “Good things come to those who wait,” but we’re guessing no group believes in it more than the members of the New Castle Town Board. For the better part of the last three years, the Board-appointed Streetscape Committee been vigorously reviewing, revising and deliberating over various developments concerning the Chappaqua Infrastructure and Streetscape Improvement Project.

Now, with the late September announcement that final plans have been approved and are officially underway, New Castle residents are anxious to see the outcome of the result. No fear, Chappaquans. Board members attest that if there’s any truth to the aforementioned adage, you’ll be anything but disappointed.

Fueled by the urgent need to replace the rapidly-failing waterlines and overall underground infrastructure_a project that was initially attempted, then halted, with the rebuilding of the Route 120 Bridge in 2012_the idea was revisited anew in May 2014, when members of the Town Board saw the perfect opportunity to revitalize the downtown landscape, and joined forces with national engineering firm WSP Sells to make it happen.

“The idea was ‘if we’re going to rip up the sidewalks [anyway], why put in concrete? Why not take a step back and put [in] something more aesthetically pleasing?’” explains Deputy Town Supervisor Adam Brodsky, who chaired the aforementioned Streetscape Committee in charge of green-lighting the majority of the enhancements. In addition to correcting the pipeline issues, “this new plan will also improve the layout of the sidewalk, as well as the regulation of both pedestrian and automobile traffic,” while adding a fresh, new vibrancy to the hamlet. In simplest terms, “it’s a win-win for everyone.”

As New Castle Town Supervisor Rob Greenstein outlined in an earlier statement, residents can look forward to enjoying a variety of new amenities when the project reaches completion, from bike racks to bus shelters to spacious communal gathering spots_the most notable to be a 3,000-square foot seating area stationed at the corner of King Street and S. Greeley Avenue. On the whole, “It’s going to be a fundamental change to the downtown [area] that’s never really been seen before,” comments Brodsky, with a smile.

On the financial end, Greenstein commended his staff for “[striking] the right balance between being cost effective and selecting quality materials and finishes that are timeless and classic.”
To that point, Brodsky admits to feeling the pressure of the economic factors looming over him throughout the entire deliberation process, fully aware that “we didn’t have a blank check [and] we couldn’t buy gold faucets,” so to speak. For that reason, he too, commends himself on “striking that balance” — without fully compromising the style of the finish — calling the feat his proudest achievement within the scope of the project. (Rather than have the entire area done completely in solid brick, the final product will be a sidewalk constructed in concrete with “beautiful brick accents along the perimeter.”)

No doubt these intricate details will breathe new life into our little town. But it’s not all about the beautification. As mentioned, the new developments also–and perhaps most importantly–aim to improve pedestrian safety.

First, the plans will see the removal of the slip lane at the intersection of King Street and South Greeley Avenue, to be replaced by a stoplight, to “allow for better traffic flow,” says Brodsky. “It’ll become more of a traditional intersection with two lanes… You’ll come to the traffic light and either turn left or right.” 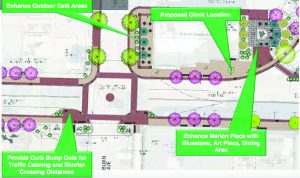 Additionally, “the parking spots on the right hand side of on North Greeley Avenue are being flipped to the other side of the street,” Brodsky explains. “There’s a jog in the road as you’re coming down to the hill, and by flipping the parking spots, that jog will be removed, so when you drive, you’ll actually go straight into the lane.” Furthermore, the triangle at the South Greeley Avenue and Quaker Street coming off the Route 120 bridge will be reconfigured into more of a teardrop shape, and the lane configuration will be modified to allow for better traffic flow.
But Brodsky also wants to remind residents that it’s not all done yet, adding, “We still haven’t hired a contractor.” Bids are expected to go out this winter with construction slated to begin in the Spring.

And how to answer to those who are worried that such massive construction will disrupt the daily function of downtown activity? “We’re going to require that the majority of the work be done at night,” Brodsky responds. And yes, he acknowledges the proposal may upset those residents living downtown “who don’t want a jackhammer going off at 3 a.m.,” but urges all residents to trust that, with negotiation, “we’ll find a nice balance.”

Regardless, it’s just one price to pay for the incredible transformation we’ll get in exchange, notes Brodsky, claiming he can only see the upside: “It’s a real vision for the future, and it’s [ultimately] going to be a reflection on our whole community,” he says, calling it a “brand-new welcome mat for visitors. If you take a snapshot three years from now, you’ll see how much it will help to increase property values, overall appeal, and more. Without a doubt, it’s going to be a change for the better.”

For more information on the Streetscape Project, please visit www.mynewcastle.org. 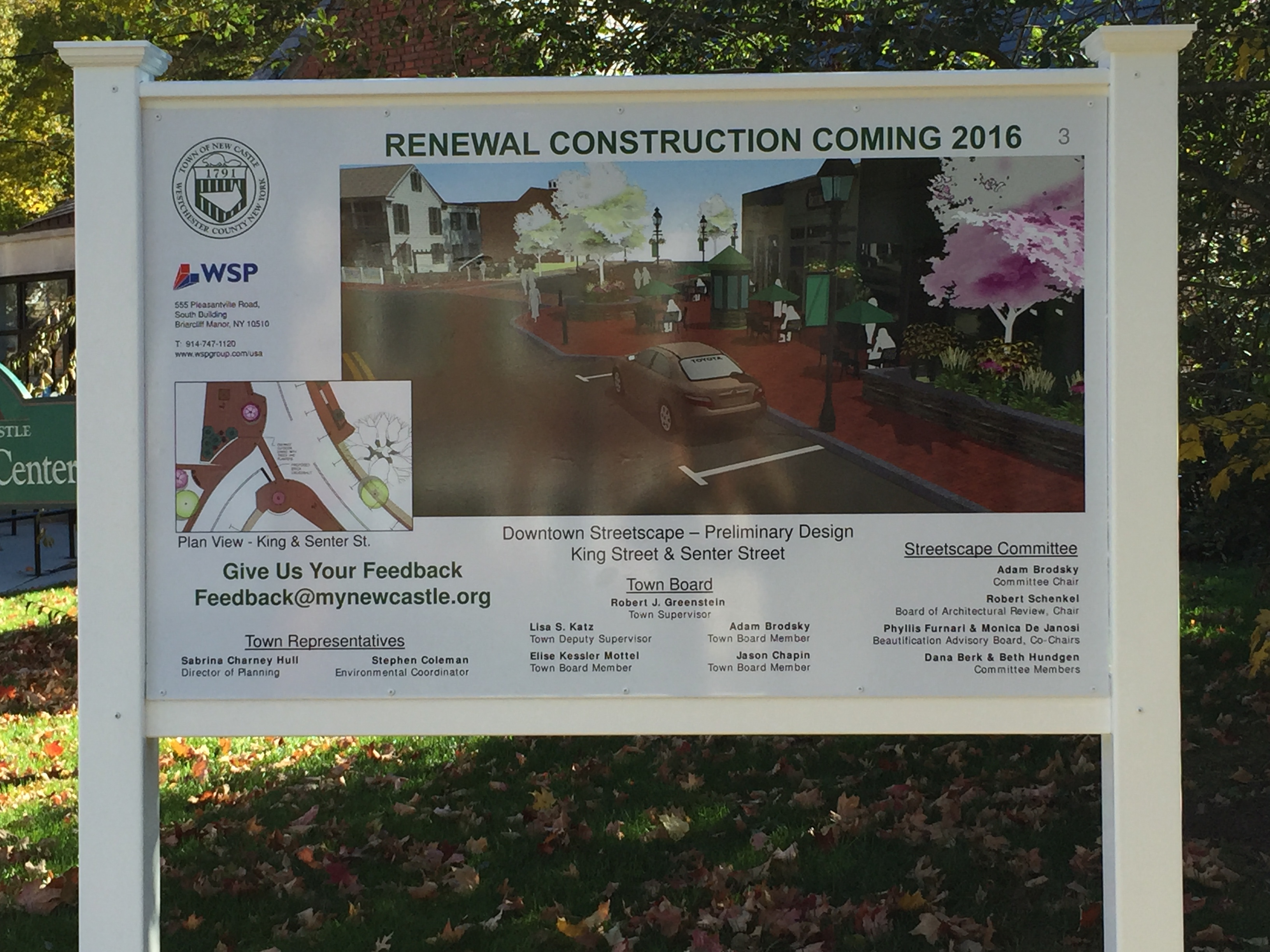 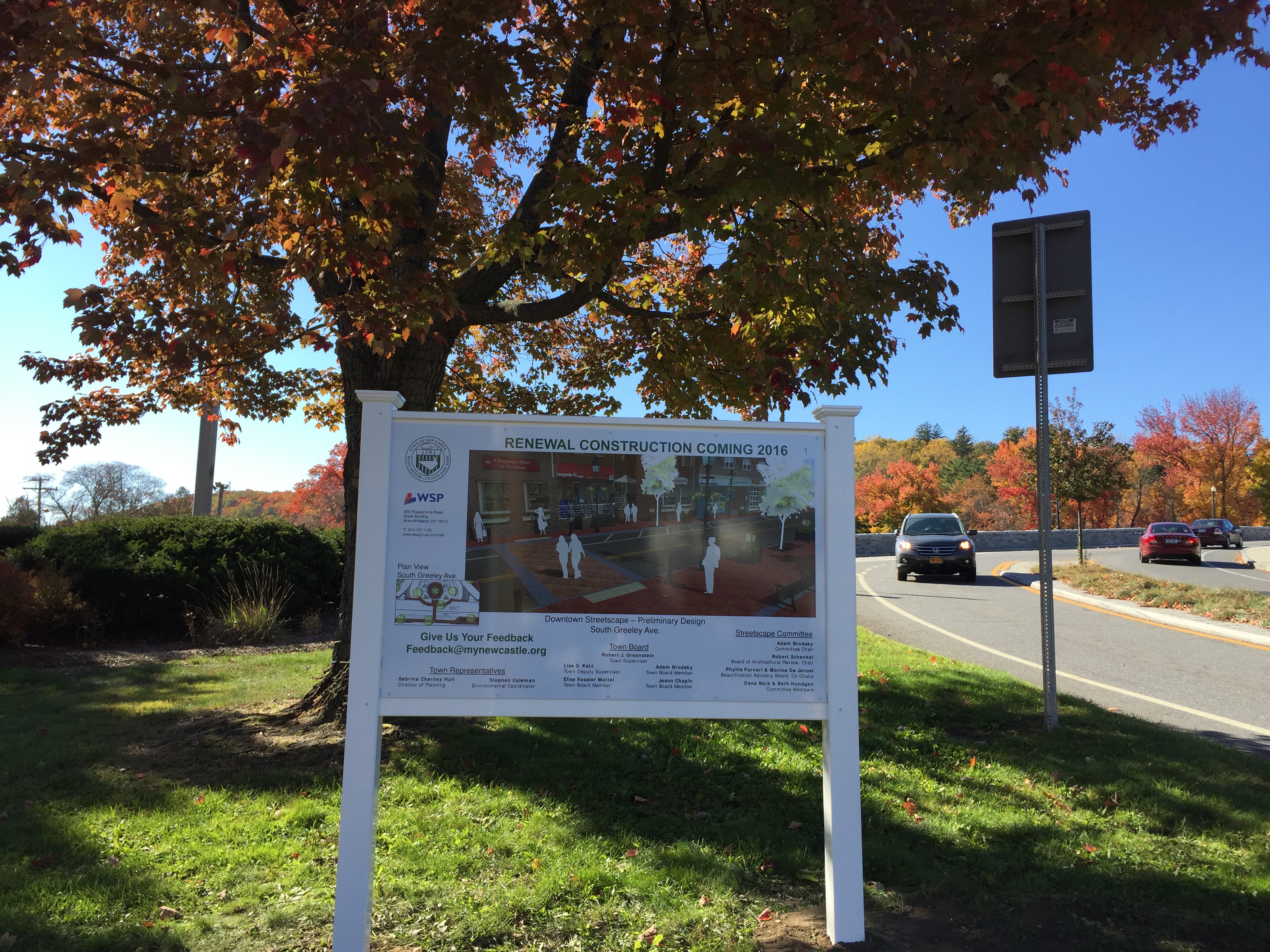 The Chappaqua Infrastructure and Streetscape Project Downtown Infrastructure and Streetscape Project is well under way. Our Streetscape Committee has been working hard for months to come up with specific recommendations for the Town Board to consider. Their recommendations have been incorporated into picture boards which are currently displayed throughout Town. Residents can provide feedback by emailing Feedback@MyNewCastle.org