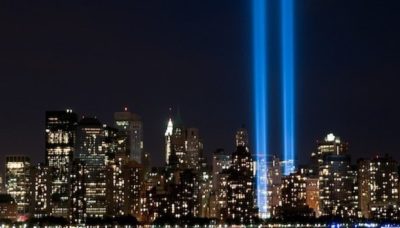 How much does a four-year-old really understand about tragedy? Ten years ago, tragedy struck, and as a four-year-old, I was caught up in a whirlwind of confusion. It was hard to comprehend what was happening around me, and although no one in my family had been in the World Trade Centers that day, I had a close friend severely affected and another friend who was one sickness away from being affected as well.

When the numbers “nine” and “eleven” are strung together, they no longer signify just a date. 9/11 invokes a memory of a horrific event that has affected all of our lives, either directly or indirectly. I can clearly recall sitting on the floor in my kindergarten classroom as a teacher took a little girl out of the room. Craning my neck up, I saw my other teacher standing at the front, and could hear her saying that the girl’s dad had died in the collapse of the Twin Towers. I felt bad for her, and I knew I wanted to be her friend – I remember going to her house another time, and again feeling sad that she had lost her father, but what did I really understand about that day? The answer: not much. As I grew older and moved on through elementary school, my understanding slowly grew. I have another memory: standing outside at the beginning of school, everyone gathered around the big flagpole, paying our respects to those who died in the attacks on the Twin Towers, the Pentagon, and United Airlines Flight 93. As I stood there, questions surged through my young mind, and I tried to wrap my head around what had happened.

Little by little I’ve learned bits and pieces about this horrific tragedy. I’ve pieced together the missing parts that I didn’t truly “get” at the age of four, keeping my eyes and ears open and asking plenty of questions. Even this past year I’ve learned new details about that day and its aftermath from reading books in English class and by just talking to my peers. Who would have ever guessed that the father of one of my closest friends almost went to a meeting in the Towers that day, but instead stayed home to take care of his wife, who was sick the same day?

Over the years, my understanding and appreciation for the dreadfulness of this event have broadened. I have learned that 9/11 was an event that changed the course of history and Americans’ perceptions about the world around them and their own safety. And that’s just the beginning of what 9/11 means to me. My guess is that, as I grow, my experiences and the people I meet will continue to teach me still more about that horrible, fateful day. Perhaps that is true for all of us.