Gray’s principal duty as town historian is to serve as chair of the town’s Landmarks Advisory Committee, established in 1990. Jill Shapiro, Town Administrator, says his presentations on properties recommended for landmark status are legendary. “They are so well researched but not dry. He always finds a spark–something interesting and unique–about a property or its former residents that makes it special.”

The Town Historian and the committee, all unpaid volunteers, also makes recommendations whenever an application for significant alteration of a landmark comes before the Architectural Review Board, Planning Board, Zoning Board of Appeals, or the Building Department so that the historical significance of the site will be taken into account. Some New Castle landmarks are also listed inside the National Register of Historic Places.

Much of Gray’s work as an historian is devoted to writing. His most recent publication is a short illustrated history, Horace Greeley and the Greeley Family in Chappaqua. In addition to research reports, histories of landmarks and exhibitions at the Horace Greeley House and Museum, Gray has a special interest in the eight graveyards in New Castle–the Quaker graveyard, Fair Ridge Cemetery, and six abandoned family burying grounds. While preparing for the recent 150th Anniversary Tour of Fair Ridge Cemetery, Ken White, Jr. a former New Castle Historical Society (NCHS) trustee and current docent, recalls, “In the true spirit of Tom Sawyer, Gray presented me with my own scrub brush and spray bottle to start on a row of headstones and also convinced me that this endeavor was really great fun.”

Gray, an ex-officio trustee of the NCHS and a trustee of the Westchester County Historical Society, states, “The monuments in these graveyards embody the history of Chappaqua from the time it was first settled.” Ken adds, “Almost all of the town’s abandoned cemeteries now lie within private property and have long been neglected. Gray is the consummate statesman in negotiating for access and managing care. Some of the graveyards are on steep hillsides and are badly overgrown, but Gray also is undaunted by bees, brambles or a challenging climb.”

Gray grew up in Chappaqua and, with his wife, Marian, raised a family here. His neighbors have enjoyed the pleasure of Gray’s sense of humor and his intellectual spark. Jamie Comstock, a current NCHS trustee, says “When I moved to Marcourt Drive in the early 90s, Gray and Marian threw a wonderful party to introduce me to my other neighbors. I have valued his warmth and kindness over the years more than I can say. Running into him around town always gives me the same kind of feeling as suddenly remembering there is ice cream in my freezer – such a pleasure!”

Until the 20th century, New Castle was primarily an agricultural town, with grist and saw mills, cider and vinegar works, a shoe factory, and a pickle factory supplementing its dairy farms and apple orchards. Given our town’s origins, Town Supervisor Rob Greenstein says, “It is beyond dispute that in order to know where we are going, we must know where we’ve been. Gray’s endeavors in searching for and memorializing our Town’s history benefits us all.” 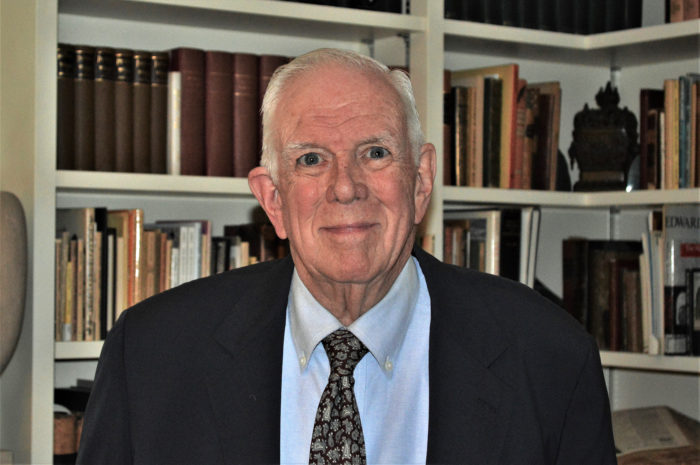 Kids love to probe Gray’s vast knowledge of the homes and neighborhoods of New Castle and learn about their own houses. And Gray never disappoints with his stories during the Q &A following the middle school presentations, when kids ask about where they live.

For example, Pierce Drive (right on the border of Chappaqua and Pleasantville) is named for the farm of a Quaker farmer, Moses Pierce, who operated a station on the Underground Railroad before the Civil War. Gray says of Pierce’s farm, “Perhaps this stop was right before the Jay Homestead in Bedford, which is also believed to have sheltered escaping slaves. The Jay family, from John Jay on, steadfastly opposed slavery.” The Pierces were members of the Quaker Meeting, whose meetinghouse was built in 1754, making it the oldest recorded building in Chappaqua. The Quakers who settled here embraced not only non-violence but also the equality of all human beings, regardless of race or sex. From as early as 1775, the Quakers denounced slavery though few went so far as Moses Pierce in defying the law for their beliefs. He and his wife, Esther, together with several others of their family, are buried in the Quaker graveyard.

Along with all of the other NCHS volunteers and the Landmarks Advisory Committee, Gray has preserved and interpreted local historic artifacts, documents, and stories to truly serve broad cultural and heritage goals in our community and beyond. Gray’s professional life as a writer and editor comes through in quality and details of the captions he writes for the rooms and objects at the Horace Greeley House. Suzanne Keay, a current trustee of the NCHS says, “At a recent lecture at the Horace Greeley House about runaway slaves in the mid-Hudson Valley, Gray seemed to know the names of almost every family mentioned by the lecturer. I don’t know what we’d do without Gray and his deep knowledge and dedication.”

NCHS is dependent on volunteers and membership to support its programming and activities, such as the annual Tree Lighting and Carols and the Victorian Valentine Tea Party. Georgia Frasch, NCHS Trustee, thoroughly enjoys going to scout potential old homes with Gray for the annual “Castles of New Castles” house tours. “I learn so much. Gray has spent countless hours looking at foundations and crawl spaces, all to preserve the rich history that has made this town so special. The names–Haight, Taylor, Washburn, Bristol, Quinby–are people who lived here and gave their properties a distinct sense of time and place. We love showing homes that demonstrate how our present is rooted in our past.”

It may be hard to imagine that our suburban homes were once heavily forested hills and valleys occupied by local Wappinger tribes whose totem was the Enchanted Wolf. Gray’s publications, stories and anecdotes keep us remembering and respecting our unique hamlet’s 300 years of significant events, persons, businesses and buildings.