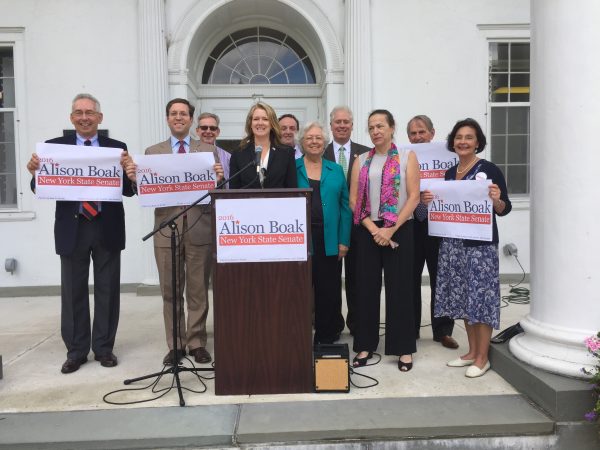 Mount Kisco, September 7–Citing especially Alison (‘Ali’) Boak’s record of  advocating for “the most vulnerable victims,” and offering a host of other reasons for their support, a key group of Democrat public officials from Westchester and Putnam Counties gathered to offer unequivocal endorsements for Boak to assume a state Senate seat in the 40th district.  She is running against Terence Murphy, an incumbent.

County legislator Michale Kaplowitz heaped praise on Boak for “her zeal, passion and a phenomenal work ethic, “ along with her “huge dose of integrity.”

Assemblywoman Sandy Galef noted Boak would work together with her and other legislators to help fight the pipeline threatening a host of area communities. Like herself, Galef noted Boak is “not in favor of the huge pipeline coming through all of our communities just to bring fracked gas to other countries,” and that Boak would work to support renewable energy sources.

She lauded Boak’s recent press conference promising to fight child sexual abuse with the passage of the Omnibus Child Victims Act, which would allow an opportunity for victims to “try to reckon with the person who has been their abuser.”

Galef said Boak is “the right person” to address “ethical challenges in our state Capital,” and that she trusted Boak to be “looking for transparency in  legislative initiatives, and very carefully looking at outside income. This is a full time job.”

Assemblyman David Buchwald called Boak a “fantastic partner” in the public arena…”not just a follower but a true leader and a force to be reckoned with; she will have a real positive impact. She cares about families, and those who go without a voice: adolescents facing human trafficking.”

Chief David Ryan of Pound Ridge said he was speaking on behalf of “Ali Boak, the person, who is working to help the most vulnerable victims come out of the hell they live with into a better world.”

For her part, Boak said she was “extremely honored” by the officials gathered before the September 13th primary “putting their trust and confidence in me.” She reiterated her commitment to fight child sexual abuse and added that she is fed up with the corruption in Albany. “I’m ready to stand up to corrupt officials,” she said. “I’m always ready to fight the status quo. I’m interested in solving problems, not playing politics.”