It’s an alliance that makes sense: residents of Chappaqua, a town known for the excellence of its school system, support a small independent school called San Miguel Academy, about an hour away in Newburgh, NY. The academy aims to help boys in Newburgh– a city with an average annual income of about $33,000 compared to upwards of $105,000 in Chappaqua– “break the cycle of poverty through education.”

“We’re so lucky to have the support system we do in the Chappaqua area,” said Melissa Paul, Senior Development Officer at the academy. “They play a major role in our existence and in our ability to continue to exist.”

She attributes the connection to Father Mark Connell, a Roman Catholic priest who worked for a time at the Church of St. John and St. Mary in Chappaqua. Connell taught for many years at John F. Kennedy High School in Somers (now known as Kennedy Catholic), but he was eventually transferred to Mount Saint Mary College in Newburgh. Still, he came down on Sundays to celebrate Mass in Chappaqua.

“That was my first exposure to Newburgh and I got to see the depth of the poverty,” Connell said. “I would tell stories about it from the pulpit, and people at Mass would ask, ‘What can we do to help?’” “He gave his community a call to action,” Paul said.

“We all know that education can snap the back of poverty,” Connell recalled telling the congregation in Chappaqua. “The response after Mass was immediate.” A dinner followed; the beginnings of a board resulted; a fundraising dinner on the heels of that raised $1 million.

Connell started a boys’ middle school after learning that research showed intervention in middle school is much more effective than in high school. (He had intended to start a co-ed school, but a group of nuns already had a vision for an all-girls school, Connell said.) Significant financial support from Chappaqua residents continues to this day. “We don’t receive any money from the archdiocese or the government,” Paul noted. 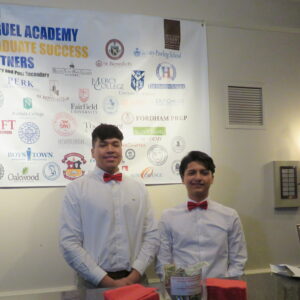 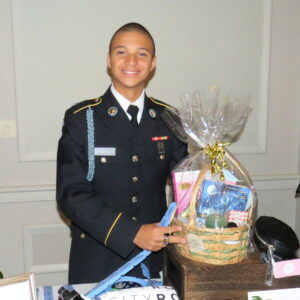 Last December, Chappaqua residents Frank Shiner and Vanessa Williams performed a fundraising concert for the school, and filled every seat in the Chappaqua Performing Arts Center, Shiner said. “It was so much fun; we had a blast,” Shiner said, adding that a tongue-in-cheek duet of “Baby, It’s Cold Outside” was a big hit. “We came together and rallied the troops and the community stepped up.”

San Miguel Academy opened in 2006 with a fifth-grade class, adding another every year until the school stabilized at providing an education to boys in grades five through eight. Boys attend the school at no cost.

Either way, the graduates of San Miguel do not leave the school community behind after graduation. “We say you’re a San Miguel boy forever,’” Paul said. “We have a 12-year commitment to our boys.” This means that well after graduation, graduates get help securing internships, looking for jobs, or help with family support.

“When we take them in fifth grade, we make a pledge that we will take them as far in their education as they want to go,” Connell said. After graduation, most of the youngsters go on to attend high school at private day schools or boarding schools. A small percentage attend the local public schools.

As for the application process, “it’s kind of word of mouth,” Paul said. “We do prefer families that meet the criteria to qualify for free lunch.” San Miguel students stay at school until 5 p.m. Monday through Thursday at the school’s Step-Up After School Enrichment Program, and they attend school in the summer as well. The Summer Scholars Program is a six-week program during July and August designed to prevent San Miguel students from suffering what Paul referred to as the “summer slide.”

It’s a faith-based school, not a Catholic school, Connell said, with a focus on values and character education. “We really try to get across that we’re a human services center that offers middle school, a summer program, family support services” and more, Paul said, adding that the school has paid doctor’s bills for the boys, helped with special needs therapy costs, arranged for transportation to high school and more. “There are a lot of things that we cover.”

Last year, some of the first 5th graders to enter San Miguel graduated college. “All of our boys graduate high school and 86 percent go on to college, trade school, or the military,” Paul said. One of the young men now manages a minor league baseball team. Another is an accountant at a local firm. Others are finishing up college. “We’re so proud of our boys and what they have been able to accomplish,” Paul said.