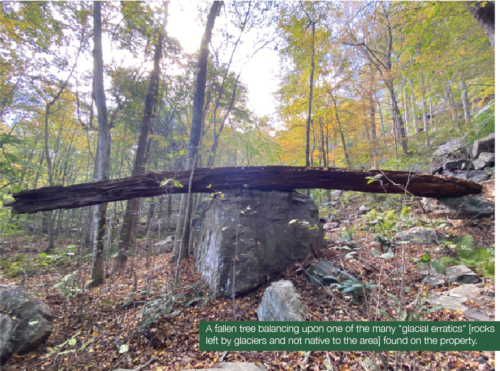 When it comes to open space preservation, a partnership is typically involved. Recently, 63 acres adjacent to a 700-acre forest were preserved, thanks to the partnership with the Westchester Land Trust, the Town of North Castle and New York State.

That sounds simple, but what it took to achieve that dream goal is quite remarkable.

Could The Dream Ever Come True?

Town of North Castle Supervisor Michael Schiliro had known about this property “since at least 2007.” Over the years, the Town’s Open Space Committee had put the 63 acres on a special list of properties to preserve, and the Town Board had had its eye on it too.

The property had changed ownership a few times. Schiliro said there was “concern that a private owner would try to develop the land, and the dream of preserving it would be lost forever.”

Then, in 2019, the property went up for sale. Schiliro was elated when the owners Robyn and Vito Errico approached him: “‘A lot of people are interested in it…. Perhaps the Town could take possession, and we could protect it?'”

Schiliro contacted Kerri Kazak, Chair of the Open Space Committee, to see if they could “explore ways to preserve this property.” Kazak was eager to contact President Lori Ensinger of the Westchester Land Trust (WLT), which also had had a keen interest in the property.

Kazak had full confidence that a land trust partnership was viable because the Town had worked with the Westchester Land Trust “for years,” and “the WLT is the expert on land preservation in Westchester County [and Putnam] and an incredible resource for municipalities.”

WLT President Lori Ensinger clarified that a land trust is “a non-profit organization whose mission is to preserve environmentally significant land in perpetuity.”

Land preservation sounds great, but what made these 63 acres so deserving of preservation? Simply put, they sit on top of a sand-and-gravel drinking water aquifer.

How The Dream Took Shape

“Lori Ensinger thought the property would be the perfect candidate for a New York State water quality grant,” said Kazak, “and the Westchester Land Trust applied for the grant.”

Securing the million-dollar grant was a labor of love that required such things as property appraisals, surveys, an environmental review, and a lot of legal work. It took two years to complete the complex transaction “because it was partially funded by the Town and by New York State with the remainder funded by WLT,” according to Ensinger.

Supervisor Schiliro commented: “Talk about a remarkable achievement! Then, Covid hit, putting us a year and a half or so behind in the process.” Finally, in late autumn of 2021, the property was purchased by the Westchester Land Trust with the Town of North Castle contributing $250,000. All the parties involved breathed a sigh of relief.

“The entire Open Space Committee is absolutely thrilled,” said Kazak. “Preservation of this property has been the goal of so many people for so long that to see it become a reality is extremely gratifying.”

Ensinger praised North Castle Supervisor Schiliro for being “fabulous throughout this entire process” and gave high marks to Kazak and the Open Space Committee for their excellent input and follow-through.

But Ensinger gives “the ultimate credit” to the landowner, who “could have just listed the property for sale and sold it to a private party.”

It took “great team effort to protect pristine land that I’ve wanted protected for 14 years,” said Schiliro. Perseverance, the art of not giving up, that he learned from his beloved mother, clicked together with “the right team and culminated in something really good.”

Schiliro further reminisced by invoking the line from his favorite movie Field of Dreams: “There comes a time when all the cosmic tumblers have clicked into place, and the Universe opens itself up for a few seconds to show you what is possible.”

So, dreams can come true, and the 63-acre property preservation is an example that one did.

How the Dream Benefits the Community 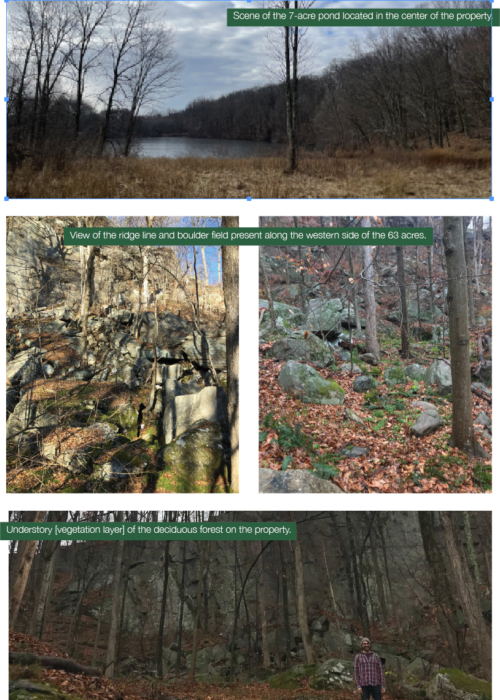 Residents of North Castle should be very pleased that their drinking water is protected. The picture could have been different, said Ensinger: “If the 63-acre property were developed into ten homes or potentially had a commercial or light industrial use, that could have had a significant negative effect on the water resource.”

Another benefit that residents can look forward to, likely in a year or so, is the walking trail that New York State has approved.

Then, there is the benefit of better air quality. Since the property is next to Highway 684, “the woodland serves to naturally filter air pollutants and particulates,” said Ensinger. This type of land ensures “the permanent connectivity of large blocks of forest” and “contributes to regional efforts to combat climate change.”

But the benefits don’t stop there.

Steven DiFalco, land project coordinator for WLT, said the property has “different habitats that host a diversity of plant and wildlife species… an upland forest with rock outcroppings, a pond, wetlands and a vernal pool that serves as an important habitat for amphibians,” such as wood frogs and spotted salamanders. Plus a waterfall. Who knew!

And Supervisor Schiliro chimed in with possibly the best benefit of all: “The land is protected forever. It was easy to think that we would never be able to secure this property.

“But in comparison to how many years this land will now be protected–for hundreds of years–it was worth keeping the dream project on the front burner.”