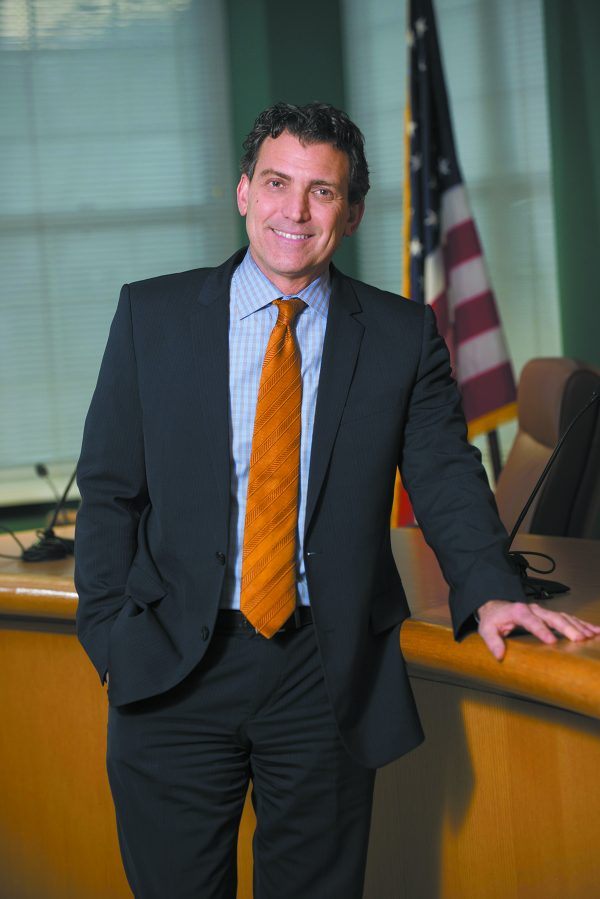 Goals in Office
Macro: Leave the Town better than when he started.
Micro: Provide residents with honest, transparent, fair, and apolitical representation with integrity, and always strive to improve the quality of life in our Town. Listen to residents and be accessible. “There is no purer form of government than local municipalities.”

From the Miller House, which headquartered George Washington during the Battle of White Plains, to Smith’s Tavern, which housed travelers for over 200 years, North Castle is a thriving town with a rich history. Over the past few years, North Castle, and most notably Armonk, experienced a bold revitalization. Building this enticing new hub required time and teamwork, much of which was led by Town Supervisor Michael J. Schiliro. Yet, as North Castle continues to grow, Schiliro impresses, “We need to move forward, but we cannot forget this town’s legacies.”

Schiliro, who was elected to the position of Town Supervisor in 2013, feels that Armonk was well-planned out in a very methodical way. And while downtown Armonk was substantially developed over the past few years, the town was careful not to overbuild or overgrow. “When I moved to Armonk, people constantly said how different it was from a decade earlier,” Schiliro said. “We have just continued with that growth.”

Schiliro has been intrinsically involved in town politics, planning, and volunteering since he moved here 17 years ago, when his oldest daughter was three years old. He and his wife raised their three daughters and two dogs in Armonk, in a house that is walking distance from town. He was a founding member of North Castle Citizen Core Council (NC4), a group of North Castle resident-volunteers that was formed in 2003 to assist and protect residents in the event of an emergency. Amongst the many altruistic efforts of NC4, Schiliro and his fellow volunteers at NC4 were responsible for setting up round-the-clock shelter for North Castle residents during Hurricane Sandy. He also served on the North Castle Town Board for more than five years before being elected Town Supervisor of Armonk.

As Town Supervisor, Schiliro is the leader of the Town Board, and essentially, the Chief Executive and Financial Officer of North Castle. He works closely with the newly appointed Town Administrator Joan Goldberg, who is North Castle’s Chief Operating Officer, meeting with her weekly. He meets with town supervisors throughout Westchester County monthly. And the buck stops with him for all budget, zoning, code, and planning decisions.  But Schiliro credits the North Castle Town Board with working as a cohesive team on all decisions that impact the area. He is particularly careful about making any major changes in the small business area. “I started out as a member of the North Castle Town Board, and I know the importance of working together as a team and keeping the best interests of the town first.”

Schiliro is particularly careful about making any drastic changes in downtown Armonk. He is exceptionally aware of zoning requirements and served on the Town Board when the middle income housing program was being implemented in Armonk. He is now working with Westchester County to contribute an adequate number of affordable housing units in Armonk. “We always had middle income units, now we are building affordable units. For this program, we are just following the rules,” states Schiliro. Armonk is building affordable housing units in Brynwood, on the old lumber yard, and on Old Route 22, amongst other places.

Building up the town without overdeveloping has been a primary mission for Schiliro, who hopes to create a Vision Committee comprising entrepreneurs, financial experts, and professional firms. When he joined the Town Board, Schiliro played a key role in turning around North Castle’s finances. He helped to make sure that North Castle restored its AAA Moody’s rating, which they lost in 2008. He also helped to re-envision the town’s finances and budget. Today, the North Castle budget is over eight million dollars, up from $800,000 in 2008. Schiliro also worked to put checks in place to prevent future budget crises.

Building up downtown Armonk and opening up Armonk Square was a proud accomplishment for Schiliro, who likes to think of Armonk as a walkable town. Making it a reality required a significant amount of collaboration by residents and town department heads, but the results were well worth the work. “Armonk Square has brought so much life into Armonk. People in other towns talk about it, it’s won awards, and it has drawn people here to visit and dine,” effuses Schiliro, who enjoys doing occasional restaurant “crawls” to get a flavor of the many different and lively restaurants in town. The new development has also made Armonk an even more desirable place to live, as people particularly appreciate the liveliness and accessibility of the town.

Schiliro is hoping to make the same positive changes throughout the rest of North Castle as well. As the Town Board reviews and updates North Castle’s comprehensive plan, Schiliro is hoping to revive commerce in Banksville and tweak the North White Plains business district to enhance profitability.  “Banksville is a very rural area that used to have a small but thriving downtown area. I would like to see that area revitalized,” notes Schiliro.

With so much happening throughout North Castle today, Schiliro continues to acknowledge the past. He takes time at every board meeting to acknowledge a past board as well as individual citizens who contributed to the town. Every meeting has “Dori time,” a moment to note positive events in North Castle and named for Town Historian Doris Watson. “A town like this is only as great as the people who put time into it, and all of these people have so much value and historical significance because they helped create what is here today.” Like his predecessors, Schiliro will most definitely be remembered as someone who contributed to North Castle’s growth and prosperity.

Deborah Raider Notis is a writer and co-owner of gamechanger, LLC, a free referral service connecting Westchester families to highly qualified, competitively priced instructors. She lives in Pleasantville with her husband, four boys, and their dog Oscar.