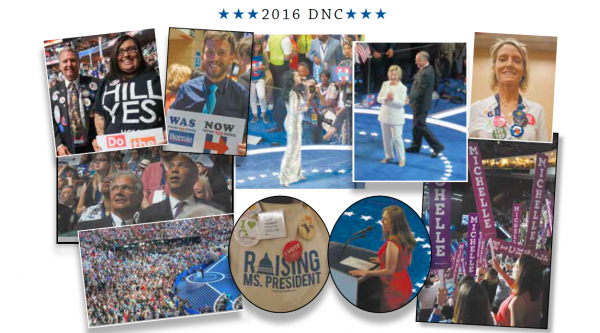 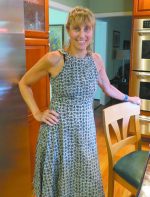 Attending the Democratic National Convention reminded me of my trips to Disney World.

The choices were dizzying. Instead of deciding among different amusement rides, I had to choose which events to attend. The Women’s Caucus or the New York state delegation breakfast? LGBT karaoke, the Working Families Party or the Climate Hawks party (or sleep). It seemed that every hour there were multiple choices.

Both locations had long lines and shuttle busses. Instead of crying babies and toddlers having tantrums, the DNC had protestors decrying fracking and proclaiming “Bernie or Bust!”

Goofy shirts and Mickey Mouse ears are popular all over Disney world; the DNC featured a panoply of Hillary buttons, flag costumes and patriotic headgear (although these parallel universes merged when I saw a striking blonde lady dressed in a pale blue ball gown who looked remarkably like Elsa from Frozen).

Both the DNC and Disney are sheltered bubbles. The outside world fades away; at the DNC, everyone around you is a Democrat with similar beliefs.

Patriotism was palpable in Philadelphia. Speakers told us again and again that America is great, that the Democratic Party holds the key to the nation’s future success.

For years, Democrats have been the party of negativity, cataloguing the countries’ woes from income inequality to racism to global warming. All these issues were mentioned, but sotto voce. The main message conveyed optimism in what Americans can achieve–just like Disney is the happiest place on earth. The crowds loved it. Their enthusiasm was electric.

And then, there are the leading ladies. Disney has Belle and Ariel and Cinderella and Snow White. The DNC had Elizabeth Warren and Michelle Obama, Katy Perry and Meryl Streep, and the headliner: the presidential nominee, Hillary Clinton. Of course, Clinton defies the stereotype of a Disney princess. She doesn’t wear a sparkly dress or a tiara. She’s certainly not waiting around for a prince to save her.

After all the balloons and confetti falls, reality awaits. After a Disney vacation, dirty streets and unpleasant service providers are jolting. After the thrill of a convention, the crassness of everyday politics is just as shocking. Not everyone is a Democrat anymore.

As much as the convention was stagecraft, at its heart it is carrying out the promise of our Constitution, written 229 years ago. The peaceful change of power in a democracy. Our nation’s first black president passing the mantle of power to what could be our first woman president. That was historic.

I shared that history with some Chappaqua residents who traveled to the convention–their stories are on these pages.

Susan Youngwood is a writer, editor and graphic designer who has been watching political conventions on television since 1972.