Please join us for this reading of a new play!

FRIDAY Dec 6th at 7:30pm
EMPLOYEE OF THE MONTH
by Brian Dykstra, directed by Margarett Perry
Join Hudson Stage on Friday, December 6th at 7:30pm for a staged reading of the new play, EMPLOYEE OF THE MONTH from the mind of actor, playwright and HBO Def Poet Brian Dykstra. Directed by Margarett Perry (director of A DOLL’S HOUSE, PART 2).
Featuring actors Vince Gatton, Tracey Conyer Lee, Larry Powell and Lori Prince.
What starts out like a Who’s on First sketch about an out-of-service staircase turns into a sly commentary on office politics, glass ceilings, income inequality and racism in Corporate America. Be a part of the process: A  Q&A with all participating artists will immediately follow the performance.
“Brian Dykstra is a master of language!”
Reading is $10 general admission, no reservations necessary.
Whippoorwill Theatre, North Castle Public Library, Kent Place, Armonk, NY 10504
For more information: www.hudsonstage.com or call the HSC Hotline 914-271-2811
These programs are made possible, in part, by ArtsWestchester with funds from Westchester County government. 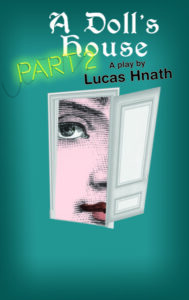 This fall Hudson Stage presents the critically acclaimed Broadway sensation: Doll’s House, Part 2 by Lucas Hnath, directed by Margarett Perry, and featuring Denise Bessette, Kurt Rhoads and Mary Stout. This is Hnath’s (Broadway’s Hillary and Clinton) inspired comedic modern imagining of Nora Helmer’s return 15 years after her shocking decision to leave her husband and children in Ibsen’s world of 1879. Now she’s back… but why? And what will that mean for those she left behind? Performances are scheduled from October 18-November 2.

For tickets and further info: hudsonstage.com.

Now in its 18th season, The Hudson Stage Company of Armonk, founded and run by producers Denise Bessette, Olivia Sklar and Dan Foster, and operating as a professional non-profit since its inception, has been dedicated to presenting fresh, dynamic, original works since 1999.

With such a packed list of past heavy-hitters as Amy Herzog’s 4000 Miles, John Patrick Shanley’s Outside Mullingar, and Animals Out of Paper, by Rajiv Joseph, there’s no doubt they’ve got that goal well covered.

And they continued to play the field and open new doors with their latest smash, The Hound of the Baskervilles, which played Whippoorwill Hall Theater from April 28th to May 13th. “It was a complete departure from anything we’ve ever done,” says Bessette, with a laugh, citing the show’s specific aspects of quirky, physical comedy, as well as its aura of sheer and silly fun that differs greater from their previously darker work. “But in that way, it’s keeping with our mission, too. We’re all about trying new things, shaking things up, and presenting new works you’ll not see anywhere else.”

While it may have indeed been a new venture for the company, it hit all the right notes in keeping with the company’s mission. The show chronicled the renowned detective and his ragtag group of friends and colleagues as they collected clues to unveil the killer of Sir Charles Baskerville, and determine the true identity of the hound who lay beside him. But, as mentioned, with a dark plot, rooted mostly in that from Sir Arthur Conan Doyle’s novel of the same name, the brilliant presentation, helmed by Mark Shanahan, comes with an added (heaping) helping of sight gags, slapstick bits, and rapid-fire quick changes that make the stage show so thoroughly enjoyable and memorable.

To boot, it was all expertly executed by three actors of the highest Broadway caliber: Matt Ban, Joe Delafield, and Denis Lambert. Ban (who plays Watson, among others) effortlessly exhibits a mastery in physical comedy, down on the floor at the drop of a hat, exaggerating otherwise minuscule movement, and playing with props to humorous effect. Delafield, who portrays nearly all members of the Baskerville brood, revels in his cavalcade of facial expressions, while Lambert’s knack for accents (especially when portraying Latina bombshell, Cecile), is simply unmatched.

Again, a departure to say the least, but their decision to produce it–among all the other wildly exciting new works they’ve put out past and present–is what makes Hudson Stage Company such an enticing entity.

While their full slate of programming for the upcoming season is still in the works, Bessette advises those eager theatergoers to rest assured that “We’re narrowing down our selection [and] we’ve got a bunch of terrific new plays coming–all of which are new to Westchester County.”

It’s all in keeping with their aforementioned goal: to provide easy, local access to fantastic theatre productions (sans the expensive Broadway prices). Of note, their Armonk location is close enough to attract visitors from Fairfield, Putnam, and Rockland counties in addition to the devoted group of Westchester County regulars.

“We love our audiences, and we’re very proud of our fantastically diverse program,” Bessette concludes. “I mean, 18 years going strong in the county… we’ve got to be doing something right, right?!”

The curtain goes up, the lights shine and 180 voices go silent as the play begins.

On stage actors and actresses bring their experience working on Broadway, television or both to the Hudson Stage Company in Armonk. Backstage, area high school students play interns, supporting the show with set changes, lighting and cues.

Those teenage stage hands include Horace Greeley junior Brian Blume, 17, who helps set up and breakdown the sets and moves props and furniture in between scenes.

“It was like a Broadway play but on a smaller stage,” the aspiring actor said, just one week into the spring production of Animals Out of Paper. “I’ve been to a lot of plays and I’ve memorized a lot of plays… and to see that type of talent on such a small stage is shocking.”

Founded in 1999 by Westchester residents Olivia Sklar, Dan Foster, and Denise Bessette, Hudson Stage Company is a non-profit professional theater that has built its reputation on Broadway-caliber performances right in your backyard.

“The audiences are always saying this is as good as Broadway or off-Broadway for a lot less money, free parking and the babysitter is on a shorter clock,” said Bessette, a Cortlandt resident and actress who has performed in theater, television and film. She has appeared in episodes of Seinfeld, Law and Order and Law and Order SVU.

Since its inception 17 years ago, the company’s backyard has changed from Croton to Briarcliff to Pace University, and now to Armonk. After its latest move in 2014, it is in residence at the North Castle Public Library’s Whippoorwill Hall Theater. Each year it stages two productions, in addition to several staged readings of new works. One of the reading slots is dedicated to area high school students, who perform their own original one-act plays.

“It’s so important to build a young audience, and theater is thriving at the high schools in Westchester,” Bessette said.

Students can pay $15 at the door for any show which still has tickets available, and Bessette said she hopes kids take advantage.

Blume, of Chappaqua, said not many of his friends are into theater, but that he hopes having Hudson Stage Company nearby will change that.

“I would encourage it because I need more help; as much help as I can get,” said the stage hand, who has gotten to meet and learn from the Broadway talent that is regularly a part of Hudson Stage productions. “I’m moving walls.”

Armonk Chamber of Commerce President Neal Schwartz said his brother-in-law came from Manhattan to see a show at Hudson Stage Company, a trip “I doubt he would’ve made previously.”

“Armonk is already known for its art and some local theater,” he said, referencing The Armonk Players, a community theater group, and The Small Town Theatre Company. “The Hudson Stage Company enhances what is already available in Armonk and strengthens Armonk as a destination for the Arts.”

Like Bessette, Foster pursued theater and, after a stint on the popular soap opera All My Children, got his break in the Broadway show City of Angels. He then switched his focus to directing, which he did both regionally and internationally in London and Australia. Now, he directs many of Hudson Stage’s productions.

“What’s been heartening is that I would say probably well over 50 percent of the people that come through the door now are people we don’t know, which is a great thing,” Foster, a Croton resident, said. “So, yes it’s been a wonderful move for us.”

Both Foster and Sklar worked on ABC soap operas in the 1980s and, in fact, worked just one block apart in Manhattan, but never met until they both had moved to Westchester. Sklar met Foster’s wife in a park in Croton in 1998. Within the same year Sklar also met Bessette at a gym after overhearing her talking about her hopes to start a theater. The three met for coffee at the Black Cow in Croton and put their plan into motion.

“You’re not going to get a Neil Simon or Guys and Dolls out of us,” Sklar said. “We try to present things to the Westchester audiences that are new to them, if not brand new.”

Hudson Stage’s production in fall 2015 of Outside Mullingar was one of the first to follow the Broadway debut of the show by John Patrick Shanley.

“I really felt like great alchemy happened,” Foster said. “It was the right cast, the right physical production, the right design. And it seemed to strike the right kind of nerve with the audience because we sold out just about every performance. It was also the kind of play that we like to do: slightly off beat, well written, challenging to the audience. That was a big one.”

This fall, they will stage the American premiere of You Will Remember Me, a French-Canadian play by Francois Archambault. The play has had success both in French and in English.

“I knew I was going to be directing in the fall and I’m always looking for new plays or plays that haven’t been done,” Foster said. “So, I tend to look at what they’re doing in England or Australia, or Canada.

It’s a very unique and challenging and funny play about a man with dementia. It’s kind of a new take on the subject.”

While the show has yet to be cast, Foster, Bessette and Sklar know they’ll have one member of the current production back – Blume.

“I’m really happy to be a part of it,” he said, looking forward to working on a third production with Hudson Stage. “Even though I’m backstage and I haven’t seen it in the full production, just from looking outside my wing or the side of the stage I’m on, I know the backstory and I know the lines.”

On July 31, Hudson Stage Company will hold its annual benefit. It typically involves a performance featuring Broadway talent. General admission tickets for all plays are $35 and students and senior tickets are $30.