Family Documentary Presented by HBO with the Museum of Jewish Heritage – A Living Memorial to the Holocaust, the short film “The Number on Great-Grandpa’s Arm” debuts this Saturday, January 27, from 6 p.m. to 6:20 p.m (ET/PT).

“A17606. That was his number and he told us back then that your number was your name. That is all he was to them.” Elliott Saiontz

Mount Kisco, January 22–Hundreds of parents and their children packed the Bet Torah Synagogue sanctuary for an early screening of “The Number on Great-Grandpa’s Arm,” a powerful 19-minute HBO family documentary directed and produced by Amy Schatz. Filmed two years ago, it depicts 10-year-old Elliott’s adoring relationship with his great grandfather, the soft spoken and big hearted 90-year-old Jack Feldman. Through the film, Elliott first asks Jack questions about his experiences, and then we hear Jack’s heartbreaking answers.

At the film’s start–and with a backdrop of historical footage and the striking animation of acclaimed artist Jeff Scher throughout–Jack describes happy childhood memories of Poland (in his hometown of Sosnoweicz) predating the war. He tells his great grandson of an eclectic hat collection or of watching soccer games. Jack speaks of a close knit family, a successful family business and summertime vacations. 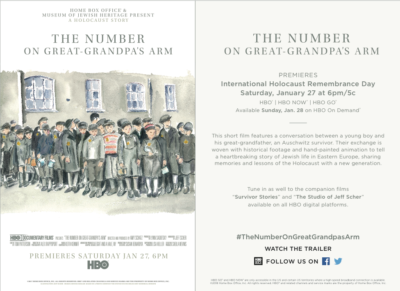 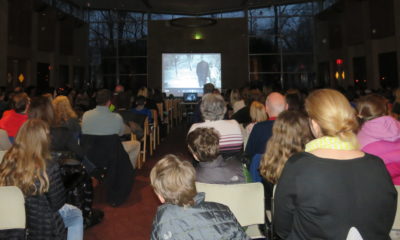 The documentary quickly segues into Jack describing harrowing experiences surviving Nazi brutality… from the forced wearing of yellow stars, confinement in a ghetto (“We had maybe 15-20 people sleeping in a room.”) to his separation from his family (“They grabbed me and took me away.”), of Auschwitz and of the notorious death march.  (“A lot of people couldn’t make it. Thousands and thousands just died.”)

Bet Torah’s Rabbi Aaron Brusso and Edna Friedberg, a historian with the U.S. Holocaust Memorial Museum, spoke before the film with remarks sensitive to and frequently directed to the children in the room. “History is what happens to real people. It’s not just a flat idea; it’s something that happens to me and to you,” said Friedberg. She challenged the kids to explore their personal connections to the Holocaust as well. “If you have a connection to it, you as kids can be detectives on it too.”

Following the screening, Feldman and Elliott  participated in a panel discussion. Jack was asked how old he is today. Not missing a beat, he quipped: 72.  Laughter filled the sanctuary–the light moment a reprieve from the darkness of what was being discussed. Elliott’s grandfather, Sammy Feldman (92-year-old Jack Feldman’s first son) told attendees: “Between the ages of 12 and 17, hopefully you were enjoying your life… the Holocaust changed all that for the children of Europe. They were bullied and lost all their privileges. They lost all their rights.” 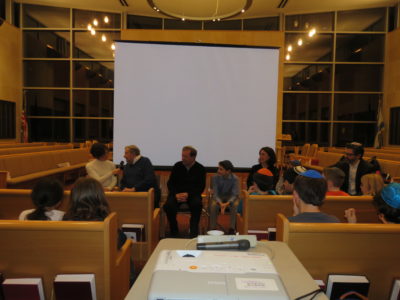 Rabbi Brusso noted fondly, “I wish I had a grandpoppy Jack.” Turning to Elliott, he offered his appreciation for “how you hold his hand and rub his arm.” He compared that kind of tenderness to Nazis “who treated people like objects.”  Elliott’s example of caring and kindness, in contrast, are “how we preserve every human being.”

On the panel, too: Elliott’s brother Jared and his mom Stacey Saiontz (“without whom it is safe to say we would not be having this program today,” noted Freidberg). Saiontz, a member of the group GenerationsForward of the Holocaust and Human Rights Education Center in White Plains, described a serendipitous meeting between herself and Sheila Nevins, a producer at HBO–ultimately leading to the film’s production. Elliott’s younger brother Jared, 10, answered a child’s question about when he learned of the Holocaust. He said his whole life he listened to his Mom interviewing his grandpa and started slowly learning.

Questions to the panel were mostly from children attending. More than one questioner seemed to want to find the good in human souls. Children are after all instructed to seek out ‘the helpers.’  “Was there ever a Nazi soldier undercover who tried to help the Jews?” one young girl asked. Elliott related that his grandfather was helped by a Nazi who knew his father and protected him from selection to the gas chamber. “Individual choices made a huge difference and could save a life,” said Friedberg. But they were also sadly the exception.

“Why were Jewish people blamed for Germany’s problems?” another asked. Friedberg explained how the Nazi regime employed the dynamics of bullying to encourage the persecution of Jews. “People feel powerful by leaving one person on the outside,” she said. The Nazis were “building on an existing hatred and stereotypes about Jews.” The Nazis also targeted and murdered hundreds of thousands of Gypsies, Jehovah’s Witnesses, gay men, political prisoners and persons with mental and physical disabilities.

But by far, it was the Jewish population that was decimated. Before the war, Friedberg continued, there were nine million Jewish people living in Europe; six million were murdered. “Two out of three.” She invited attendees to visit the U.S. Holocaust Memorial Museum to learn more.

www.mjhnyc.org/‎   The Museum of Jewish Heritage

The film will also be available on HBO On Demand, HBO NOW, HBO GO and affiliate . THE NUMBER ON GREAT-GRANDPA’S ARM will be included in a signature initiative that is part of a robust education program offered by the Museum of Jewish Heritage – A Living Memorial to the Holocaust. This effort is designed to use the film with a companion special installation and curriculum to connect stories of the Holocaust across generations.Additionally, companion segments featuring young people in conversation with survivors will be made available on HBO digital platforms.

Director-producer Amy Schatz’s notable HBO projects include the recent “Saving My Tomorrow” series, plus “An Apology to Elephants,” the “Classical Baby” series, “A Child’s Garden of Poetry,” “‘Twas the Night,” “Goodnight Moon and Other Sleepytime Tales” and “Through a Child’s Eyes: September 11, 2001.” Her work has won five DGA Awards, seven Emmy® Awards and three Peabody Awards.

Animator Jeff Scher’s work is found in the permanent collections of the Museum of Modern Art, Academy Film Archive, Hirshhorn Museum and the Pompidou Centre.