Many students eager to join volunteer organizations that build homes in impoverished communities choose exotic locales such as Africa, Haiti, or Central America. This frustrates Jim Kiloran, Executive Director of Habitat for Humanity of Westchester. “I’ve seen people die in substandard housing right here in Westchester County, though few can believe that. Greed overtakes practical, simple living. Nobody should go to bed in substandard housing in one of America’s wealthiest counties,” he told me. This passionate belief drove Jim to get involved with Habitat nearly thirty years ago, taking over and transforming entire communities, and meeting five presidents along the way. He finds it discouraging that, in Westchester, with its wealth, top students and corporate leaders, so few people become locally involved. Even many in the faith communities take their youth groups out of town on mission projects. 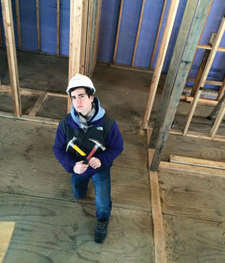 Growing up, Jim recalls hearing about the extremes of wealth in the US and the war on poverty. He also thought about community and demographics, and was motivated to become involved at a grass roots level. He believes that affordable housing creates a “neighborhood” in the true sense of the word; a community where families and local businesses are connected and grow. Today, with shifting demographics, this is more important than ever. “Generations of families living in one community is a foreign concept today,” suggests Jim. As kids grow up and move away, and older people move to warmer climates, the lack of connectivity within communities impacts everyone from residents to local businesses. Affordable housing makes it more viable for people to stay in their homes and this, in turn, maintains the community.

“The best thing that ever happened was Byram Hills High School starting a Habitat Club,” he said. This was thanks to Dwayne Smith, a Byram Hills teacher and the Habitat Club advisor until 2009. Byram Hills was the first high school in Westchester to do this, and now sixty area schools have Habitat Clubs. Empowering youth to use their abilities to transform neighborhoods is what gives Jim hope. “I don’t need politicians, I need people.”

Brandon Michaels, a Byram Hills graduate and now college junior, is an example of how getting involved at an early age changes lives. Growing up in Armonk, he was “shell-shocked” at age thirteen when, along with a friend whose older sibling was a Habitat Club member, he went into a dilapidated church in New Rochelle to help paint. “What can I possibly do to improve this?” he thought, seeing peeling paint and rusty folding chairs. Though he felt their improvements were modest, church members were incredibly  grateful for all their hard work. This feeling of having made a difference is what inspired him. 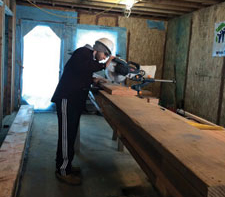 As a freshman he became very involved in Habitat Club, regularly attending meetings, organizing monthly fundraisers and going to building sites. Habitat Club members face logistical problems as their work is done off school grounds and on weekends. Transportation to and from job sites took organizing, but car pools formed so kids could arrive together. Parents also had concerns about the neighborhoods where the kids worked, the tools they were using, and the nature of the work. “This work is very challenging,” Brandon said. As his commitment became evident to Jim, Brandon was given more responsibilities and the leadership role of site supervisor. Parents trusted Brandon to drive their kids and look out for them on job sites.

Brandon was instrumental in recruiting other students and strengthening the club, even doing his senior internship with Habitat. He recognizes that his relationship with Jim has evolved into friendship. “I enjoy the work. I always have. We have so much more than so many people – this is not anything I’d do for recognition.” That said, Brandon was recognized after his senior internship and honored with a plaque at the annual Habitat luncheon.

His advice to students is to join Habitat Club or create one. In addition to volunteering on job sites, there are area Habitat Restores that sell household items such as gently used furniture, appliances, and building materials at greatly reduced prices. These stores are in constant need of volunteers and a great way to get one’s foot in the door and be considered for job site work.  “If Jim knows who you are, you’re doing something right,” Brandon said.

Meanwhile, Jim continues his crusade to have Habitat homes in every town in Westchester. “Without affordable housing, Westchester cannot succeed. We were all put on this earth to volunteer,” he said. “Let’s take that wealth, knowledge and ability and transform. We can do it!”

Are you ready to volunteer? Jim is waiting for you. For more information, visit www.habitatwc.org

Miriam is a freelance writer, fourth grade teacher and single mother of two daughters living in Westchester. A breast cancer survivor, she volunteers for the American Cancer Society and has completed four marathons and travels the world. Follow her on Twitter @writerMimiLong.