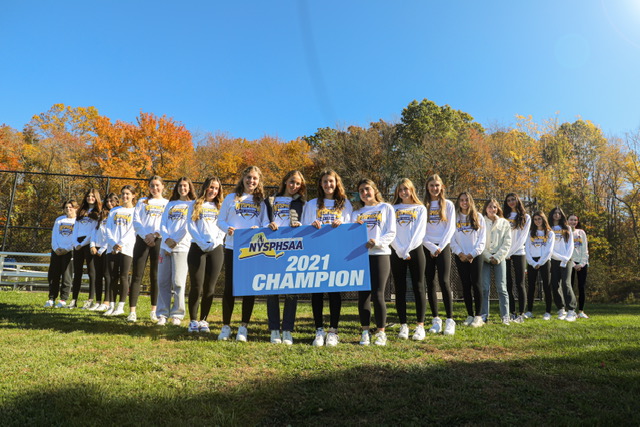 Finishing their undefeated season with a 22-0 record, they are the first girls’ team in any sport in Byram Hills’ 55-year history to win a state championship and only the third team in Byram Hills’ history overall.

“For any varsity team to go undefeated through the regular season, repeat it through the post-season and then win the first state championship for the girls in school history, is special and rare,” says Rob Castagna, Byram Hills’ Director of Health, Physical Education and Athletics. “Accomplishing this in a particularly long season that started back in August says a lot about them as student athletes. To juggle their academics week to week for the duration and then to perform at such a high level on the courts is impressive.”

The victory was especially sweet for the nine seniors on the team who did not get to play much as juniors due to an abbreviated season last year because of covid concerns.

Head coach Michael Racanelli, who led the girls to victory and was recently named LoHud coach of the year, explained that the season began much earlier than the first day of tryouts in August.

“It started with a meeting in the off-season in January 2021 where I let them know that if they put their minds to it and worked hard, they could be anything they want in this world, including champions. We laid out a road map of what it would take to win a championship, which included great leadership, a willingness to work harder in the off-season than ever before and a determination to improve our physical and mental skills. The girls spent the winter, spring and summer months preparing as best they could. The team admitted to me just recently that they didn’t totally believe a championship was possible until we started this magical run.”

In addition to the team’s historic accomplishments there were record-setting individual performances.

Alyssa Margolin, senior captain and the #1 singles player on the team, finished in third place at the New York State singles championships. That finish was the best finish for any Byram Hills tennis player, boy or girl, in Byram Hills history. Alyssa was recently named the Westchester/Putnam Tennis Player of The Year and is also a Con Ed athlete of the week winner.

Teammates junior Chloe Bernstein and freshman Jenna Kleynerman also finished in third place at the New York State doubles championships which tied the best doubles finish by any boy or girl in Byram Hills history. Alyssa Margolin and her sister Ellie had previously set the mark in 2018 and 2019.

The team was celebrated by cheering fans on November 14th with a parade down Main Street in Armonk, a marching band, and the girls riding on a decorated truck announcing them as state champions. After a ceremony with school and town officials on the North Castle Town Hall steps, they walked over to add the team to the sign commemorating the school’s state champions on Route 128. They join the 2007 boys’ varsity soccer team and 2015 varsity baseball team as the only Byram Hills teams to capture a state title.

“Winning the championship title was the perfect way to finish off my final season,” says Margolin. “I think it truly reflected the dedication, training, and sportsmanship that the team demonstrated this season and the last four years, and I am very proud to have been a part of it. It was incredible to see the support of the school, community, and the town supervisor Mike Schiliro and New York State Senator Shelley Mayer. The parades and recognition were unparalleled and something all of us will remember for the rest of our lives.”

“I remember the coach telling us last spring that there was going to be a team state tournament this coming season and that we were going to win it. I walked away from that meeting thinking he was crazy and that that was never going to happen,” admits senior captain Chloe Siegle.

It was incredible to see the support of the school, community, and the town supervisor Mike Schiliro and New York State Senator Shelley Mayer. The parades and recognition were unparalleled and something all of us will remember for the rest of our lives.”  – Alyssa Margolin, Senior Captain

“However, as we started practicing and playing matches, I could see how badly we all wanted it. Match after match, our dream seemed like it was coming closer. The one thing that I think helped us go all the way was our team’s close relationship. I couldn’t have asked for a better team or season for my senior year. I will forever remember it and the significance of winning the first women’s state championship in Byram Hills history. I can’t wait to come home each year and drive by the sign remembering the incredible season I got to experience.”

“One thing that was special about this season was the way our team worked together,” says senior captain Sydney Levy. “We were always there for each other which really helped us throughout the season.  Also, being able to have a lot of fans this year was really special.  It is amazing to have so much support from our school district and town.”

Reciting the proverb “The journey of a thousand miles begins with a single step,” Racanelli declares, “the drive for the next championship begins right now.”

There is no doubt this team has what it takes.