Some 500 persons attended a New York Tribute Dinner on October 28th during which Chappaqua’s Stacey Saiontz was one of two recipients of National Leadership Awards by the U.S. Holocaust Memorial Museum. Saiontz is a founding member of the Museum’s Next Generation board and was recently appointed to its Education Committee. She shares her passion with her children who were featured in the HBO documentary The Number on Great-Grandpa’s Arm.

“The first words that spring to mind about Stacey are high energy and committed,” said Howard D. Unger, of the United States Holocaust Memorial Council, in introducing Saiontz. “Whether it is fiercely advocating for food allergy legislation or relentlessly advancing Holocaust related causes,” he added, “when Stacey is in, she is all in.” The dinner raised over $3.2 million. Saiontz called the Museum “a beacon on the global stage; it reminds us all of what we are capable of, the good and the bad, and offers a universal message of tolerance and importance of taking action. The Holocaust is not just a story of hate; it’s also a story of resilience, humanity, love and kindness,” she said.

Gary Jacob, a second honoree who has served as a regional co-chair of the event,  is vice president of Glenwood Management and vice chairman of the Settlement Housing Fund. Powerful presentations at the benefit included harrowing testimony from Auschwitz-Birkenau survivor Irene Weiss.

Weiss described her family’s losses and how she was “forced to live and work next to the crematorium” and “forced out on a death march with 1000s of other prisoners.” “How does one put into words the magnitude of such a loss?” she asked.

Sara J. Bloomfield, Museum Director, said that while the world will always change, “human nature never will, and that we alone are responsible for the solutions.” She described the need “to unlock these powerful lessons of Holocaust history…so that wishful thinking might be constantly be met with determined resistance, so that today’s bystander will not become tomorrow’s victim… That’s the museum’s bold and urgent aspiration.” For more info, visit ushmm.org. 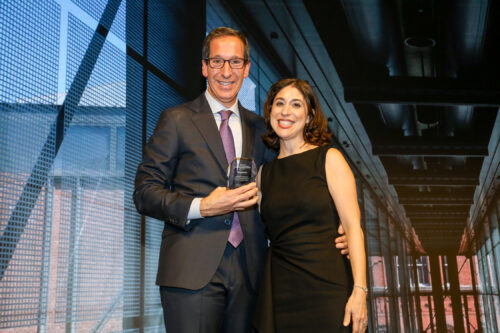