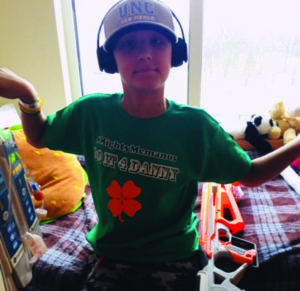 Usually ten-year old Danny McManus, a fifth-grader at Wampus Elementary School, is outside with a ball and lacrosse stick.  Standing 5’4” tall, he towers over most of his friends, and is a tireless force of nature.   This past October, while Danny was competing in the Tri-State 91 Lacrosse tournament, he wasn’t keeping up the way he normally would.  Danny’s parents sensed something was wrong, took him to the pediatrician, and within 24 hours was admitted into the hospital and diagnosed with leukemia–a form of blood cancer.  When I see people in town now, Deidre McManus, Danny’s mother says, “I realize we have changed people by sharing what we are going through.” The subsequent outpouring of support from family and friends, neighbors, doctors, teachers and clergy tells a heartwarming story about the generosity of Armonk’s community.

When Mrs. McManus and her husband Francis were told that they needed to bring Danny to the hospital, they had to find someone to take care of their older son, Colin, who is in 7th grade. Their neighbors Drs. Erik Cohen and Maude Lemercier were already friends, but have become like extended family, giving Colin an extra set of adults to rely on, and helping the McManuses to interpret the constant stream of medical information.

That first night, while Danny was being evaluated in the hospital, Deirdre thought of her lifelong friend, Karen Wolownik, a Nurse Practitioner and Nurse Leader in the Pediatric Blood & Marrow Stem Cell Transplantation Unit of Maria Fareri Children’s Hospital at Westchester Medical Center.  Within a few hours, Karen received an alert from the hospital about Danny. She called Deirdre right away–Karen’s expertise was precisely what they needed. Karen was confident that Danny was in the right place to deal with this horrible disease.

It’s taught us a lot about cancer–how it can affect anyone, even kids… and that even with cancer Danny is still just Danny—my friend.  He has shown us that having a strong growth mind-set helps get you through the things in life. —Shane Gordon, Danny’s friend

The first line of treatment for Danny’s acute myeloid leukemia which is commonly called AML is potent chemotherapy, often followed by a stem cell transplant. The Children and Adolescent Cancer and Blood Disease Center at Maria Fareri Children’s Hospital has become a center of excellence for such therapies. The center was established in 2011 when Westchester Medical Center hired Dr. Mitchell Cairo from Columbia University to lead it. Dr. Cairo is a world renowned specialist in stem cell biology, molecular oncology and experimental immunology and a long-time Armonk resident.

In addition to the expertise provided by Dr. Cairo and his team, the McManuses have been overwhelmed by the competence and compassion of the staff at Maria Fareri Children’s Hospital. “They’ve worked with Danny every step of the way to always make sure he understood what to expect during every procedure.” For example, before Danny had a port connected to deliver chemotherapy, the Child Life Specialist explained the procedure by letting Danny feel the port and see how it would be used with the help of a doll.  Then, during the chemo, Danny needed an NG tube (a nasogastric tube) to deliver nutrition directly to his stomach. The physician working with Dr. Cairo, Jordan Watson, MD, asked one of the residents to demonstrate for Danny what it would be like and, right in front of Danny, inserted a tube down Jordan’s nose and throat! She said, “I’ve always wanted to know what it felt like!”

As if that wasn’t enough, last month Dr. Watson asked the McManuses if Danny would be part of her team, raising funds to support the St. Baldrick’s Foundation, which is dedicated to funding research for childhood cancers. Danny’s family and friends created The Mighty McManus Team, Dr. Watson and her fiancée shaved their heads alongside nine of Danny’s friends, and together they raised nearly $30,000.  Danny’s friends, Shane Gordon and Michael Bellantoni, are two of the “shavees.”  Gordon says, “The reason we all shaved our heads was because he really likes his hair, so we thought it would be good if we let ours all grow back together.”  In addition to funding research, the McManus’s relatives created a GoFundMe campaign to lend a hand while Deirdre and Francis take time from work and manage the costs of Danny’s care.

A Turn for the Better

The next step in Danny’s treatment was a stem cell transplant. Statistically, 1 in 4 siblings have markers indicating they are a good match and won’t be rejected by the recipient. In Danny’s case, they were thrilled to discover that his brother, Colin, is a 100% donor match for Danny, making a stem cell transplant an ideal option. On January 4th Colin underwent a 3-hour operation–drawing bone marrow from both hips to obtain stem cells to populate Danny’s bone marrow. Since then, Danny has been improving every day, and although he has no immune system of his own yet, he was able to come home from the hospital after 133 days when they celebrated Danny’s 11th birthday on March 13th.


The McManuses are touched by the efforts made by every church and synagogue in the community. Melissa Gordon, who attends St. Patrick’s with the McManuses, says that since Danny’s diagnosis, a remarkable number of children and adults have filled the church on First Fridays, when the Church holds special services for adoration and prayer. At school, Danny’s teacher, Mrs. Marchesini, has kept Danny as involved as possible, and in the meantime made t-shirts, videos with messages from his classmates, and a video of the whole class singing Happy Birthday to Danny.

Shane Gordon and Danny look forward to getting on their bikes again and exploring the outdoors.  When I asked Shane how Danny’s illness has affected him and his friends he said, “It’s taught us a lot about cancer–how it can affect anyone, even kids… and that even with cancer Danny is still just Danny–my friend. He has shown us that having a strong growth mind-set helps get you through the things in life”.

For those who would like to help, both the Maria Fareri Children’s Hospital and The St. Baldrick’s Foundation accept donations.  In addition, the McManuses recommend registering with BeTheMatch.org to help someone in need of stem cells.