Frank Shiner and his wife, Suzanne, have restored two 100-year-old homes since moving to Westchester. The first was in New Rochelle–built in 1906 –and the second in Chappaqua–built around 1912–which he and his wife have called home since 2003. The couple has three children: Matthew, 28; Jeremey, 26; and Lindsay, 17.

Since moving in, they have restored or replaced lighting fixtures with period pieces, resurfaced the wood–while preserving a “historic patina,” and, of course, restored the original pool.

“We bought dilapidated places and brought them back to what they were originally,” said Shiner, who is involved in the New Castle Historical Society.

In front of their home was a live-in cottage, which Frank has converted into a garage and his own rehearsal space. The award-winning singer and recording artist practices there before shows, where he performs some of his favorite songs. But, he is quick to point out, “I don’t do covers.” “I put another spin on it, or make people think about it a different way,” he said. 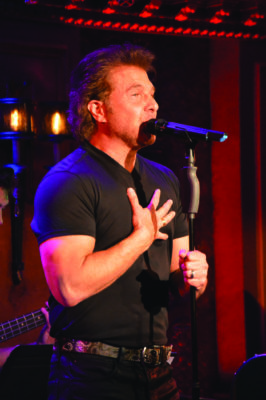 Randy Radic, who reviews music for Huffpost.com, agrees. In addition to declaring, “the man can sing,” Radic says, “you’d be hard pressed to say who did the original. And who cares anyway, because Shiner’s rendition is so darn good.”

His recent shows, which included one at the Chappaqua Performing Arts Center April 22, featured songs from his new album, Lonely Town, Lonely Street.

The 12-track album dropped May 19 and features his reimagined versions of R&B, jazz and blues classics popularized by artists like Elton John, The Rascals and Donny Hathaway. The Doc Pomus song “There Is Always One More Time” is both the last song on the album and at shows because, he says, it drives home the message that it’s never too late.

“People walk out of there feeling like anything’s possible,” the “Blue-Eyed Soul” singer said.

Originally, Frank was an up-and-coming actor in New York City, earning roles in soap operas and theater. He was doing well, but not making enough to support his wife and son. When his second son, Jeremy, was born, he decided to give it all up and take a sales job.

In 1995 he started his own business managing payments for doctor’s offices, which today has 130 employees nation wide. He never thought he would perform again, until one night in 2011 when the couple stopped in for a bite at the since closed 353 Restaurant in Bedford. “They had an open mic night,” Frank said. “I hadn’t sung in front of people in 12, 15 years, and Suzanne said, ‘get up and sing me a song.’”

Frank tried to say no. But, Suzanne, who was going through chemotherapy for triple-negative breast cancer, “literally cried and pulled her wig back and showed me the bald head,” Frank said. “She played me pretty good.”

He then got up and sang and, “had a little bit of fun.”

The bandleader asked him to sing another song, and then a third. After that, Frank ran out of songs he knew well enough, which he said was the only reason he got off stage.

“It meant a lot to me, because I felt like he wasn’t himself for so long for us, to give us this amazing life,” Suzanne said, looking up with her glassy blue eyes as if watching Frank take the stage all over again. “It was like it never left him.”

Afterward, the bandleader running the open mic asked him to join his orchestra. For the second time that night, Frank unsuccessfully declined an offer.

“I didn’t want to do it, he said. “I just wanted to be with [Suzanne] and support her through the illness. She insisted.”

Suzanne’s battle with breast cancer spanned what Frank calls “five years of hell” and multiple complications. She had 12 surgeries all together. Today she is cancer free.

“Anything I have ever done she has inspired,” Frank said, calling the dancer from Arkansas “the best woman I know.”

From there the businessman made music his career–while keeping his day job. He performed with the orchestra, and everywhere else he could until he caught the eye of his now manager, Ken Levy. “It was like, ‘Bam,’ we went right into production,” Frank said.

His first album, appropriately titled “The Real Me,” was released in 2014 and picked up by Universal Records. Through songs by Van Morrison, Randy Newman and Elvis Costello, he told the story of putting his dreams on hold to raise his family, and then coming back to it.

On his new album, every song is about love, which Frank said he didn’t notice until he started recording.

“I don’t believe in coincidence,” Frank said. “Something happened at that open mic night… It was almost like the world or god was saying, ‘job well done, and now you guys need some healing.”

After a deep breathe to exhale the emotion, the Blue-Eyed Soul singer picked his head back up, locked eyes with his blue-eyed bride, and continued.

“Music has been so healing, I cannot tell you. It’s totally changed our lives.”

And with another change coming–their youngest, Lindsay, going to college in the fall–the soon-to-be empty nesters are looking forward to the next chapter. Suzanne wants to take tap dance and yoga classes, and both want to travel. Frank may even try to perform while abroad. The resurgent singer also wants to, like his home, return to what he was originally. “I want to do Broadway musicals,” he said.

And Frank is taking steps toward picking up where he left off nearly 30 years ago, when he was cast in a “Broadway-bound” musical scored by country music superstar Garth Brooks–support fell through for it when Brooks dropped out. Frank has tasked his agent with starting the process of getting him in front of agents, and he said he may just sing some Broadway songs at his upcoming show at Feinstein’s 54 Below in Manhattan, scheduled for July 8.

“We’re just going to do a lot of things we haven’t been able to do for a long time–find ourselves again,” Suzanne said.

Find out more about Frank Shiner at www.frankshiner.com.