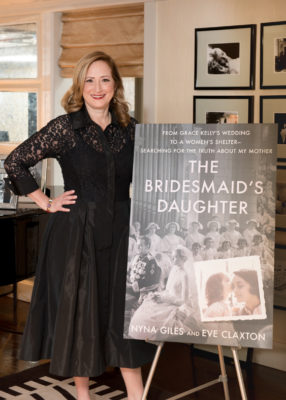 The Mental Health Association of Westchester (MHA) is thrilled to host Pound Ridge’s Nyna Giles and co-author Eve Claxton for the exclusive Westchester reading of their poignant and unflinching portrait of Nyna’s mother Carolyn, whose glamorous life was sidelined by mental health issues. THE BRIDESMAID’S DAUGHTER: FROM GRACE KELLY’S WEDDING TO A WOMEN’S SHELTER—SEARCHING FOR THE TRUTH ABOUT MY MOTHER (St. Martin’s Press; on sale March 27, 2018) is a riveting investigation to unearth the lost pieces of Carolyn’s remarkable life story, as well as tell the tale of the daughter who reclaimed her mother’s memory.

To be held on Wednesday, April 11 at 7 p.m. at the Walker Center for the Arts at the Harvey School in Katonah, the book launch reading includes a Q&A, book signing and refreshments; tickets can be purchased at www.mhawestchester.org for $25. This special event – a rare occurrence to hear from both authors in person – raises awareness for mental health issues and benefits MHA, a community-based nonprofit that provides innovative, person-centered treatment.

“We are thrilled that Nyna has chosen to shine a light on the importance of mental health and getting the right help at the right time. MHA is honored to partner with both authors for this exciting reading of their new release,” said MHA CEO Charlotte Östman, LCSW-R.

“Telling my mother’s story in ‘The Bridesmaid’s Daughter’ has been a highly emotional journey – laying bare the heartbreak and devastation mental illness can cause a family,” said Nyna Giles. “This project was extremely painful at times, but ultimately was one of the most fulfilling events in my life. It illustrates the importance of early intervention and treatment, and has enabled me to find a tangible way to give my mother’s life meaning by helping others. I hope that by sharing her story, I can start many important conversations about mental health advocacy. This is why I feel The Mental Health Association of Westchester is vital to our community, ensuring that mental health services are readily available to those who need it the most.”

At 29 years old, Westchester native Nyna was in line at the supermarket when she looked down and saw the headline: “Former Bridesmaid of Princess Grace Lives in Homeless Shelter.” Nyna was stunned: her family’s private ordeal was front page news. The woman on that cover was her mother. The truth was, she barely knew who her mother had been before marriage. She knew Carolyn had been a model – arriving in New York in 1947 and rooming at the legendary Barbizon Hotel for Women, where she’d met the young Grace Kelly. The two had become fast friends, and Nyna had seen the photos of her mother at Grace’s wedding, wearing the bridesmaid gown that had hung in her mother’s closet for years. But how had the seemingly confident, glamorous woman in those pictures become the mother she knew growing up – the mother who told her Nyna she was too ill to go to school and kept her isolated at home?

THE BRIDESMAID’S DAUGHTER is a deeply personal memoir about friendship and motherhood, and a clarion call for improving mental healthcare. In telling her own and her mother’s story, Nyna aims to raise awareness for mental health advocacy so that no one else has to experience the issues Carolyn and her family did.

PRAISE FOR THE BOOK

“Celebrates a lifelong female friendship while shedding light on a powerful, if at times painful and complex, mother-daughter bond. A poignantly compelling memoir about family, mental health, and revisiting the past.”
—Kirkus Reviews

“This is a fascinating story of the toll of mental illness and a daughter’s search for understanding and forgiveness.”
—Booklist

“Here is the heart-rending story of two beautiful and glamorous women, and the spirals of disaster into which one of their lives tumbled. As daughter and detective, Nyna Giles writes with moving sensitivity about the dazzling Grace Kelly and her best friend — Nyna’s own mother. The book unfolds like a novel — a tragic and deeply moving saga. Read it   and weep.”

—Robert Lacey, bestselling author of Grace: Her Lives – Her Loves

“Straight from the heart, and told with great bravery, The Bridesmaid’s Daughter is a fascinating and powerful story of a daughter’s love for a flawed parent and the struggle to understand a tumultuous childhood.”

NYNA GILES is the youngest daughter of Carolyn Scott Reybold, a Ford model best known as one of Grace Kelly’s bridesmaids. Nyna has worked in advertising sales with leading media organizations such as Westchester Magazine, 914INC, Westchester Home, The Daily Voice, Record-Review and Westchester and Fairfield County Business Journals. Today she is COO of Giles Communications. She is also an advocate for the mentally ill, having served as a vice president on the board of The Association for Mentally Ill Children of Westchester for ten years. In the spring of 2015, Nyna and her husband, Peter, co-chaired The Mental Health Association of Westchester’s MHA On The Move 5K Run/Walk. Nyna lives in Westchester with her husband, and has three grown children and three stepchildren.

EVE CLAXTON is a writer, editor, and Peabody award-winning radio producer. Since 2006, she’s worked as an editor or co-writer on popular non-fiction books for major publishers including the memoir “He Wanted the Moon,” co-written with Mimi Baird, described by The New York Times as “utterly impossible to put down” and currently being adapted for Brad Pitt’s Plan B with a screenplay by Tony Kushner. Eve is also the editor of The Book of Life an anthology of the best memoir writing throughout the ages.

ABOUT THE MENTAL HEALTH ASSOCIATION OF WESTCHESTER