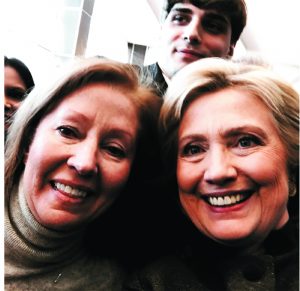 On January 28th, I had the privilege of attending the “Breakfast with Hillary” event in White Plains. Hillary took a short break from campaigning in Iowa to come back to Westchester for this key fundraiser. While waiting to go through a security check, people were friendly and so excited. We chatted about our passionate support for her candidacy and recounted personal Hillary encounters.

Once Hillary took the stage, she spoke at length on topics ranging from the economy to foreign affairs to health care to education to sensible gun laws, and on and on. What impressed me most: how she spoke effortlessly, with incredible knowledge on so many topics–and without notes! I’m sure she’s given similar speeches many, many times but she spoke with sincerity and passion. As I was hearing her, I kept thinking:  “I am listening to the next president!”

When she was finished, she didn’t take questions but allowed people to approach her for individual comments or questions, and, of course, SELFIES! I worked my way determinedly through the crowd even while I knew I’d have maybe seconds to talk to her. Upon my turn, I told her about my son in the Navy and how much I appreciate that she didn’t refer to soldiers as “boots” on the ground. When I told her how our troops are sons and daughters, husbands and wives, she acknowledged their sacrifice. She “got it,” nodded and hugged me.

After taking a couple of selfies, she asked me to send the photo to my son and to thank him from her. I was tearing up talking to her. She took the time to listen to everyone who spoke to her, graciously taking selfies with everyone, as Secret Service moved her along. While my encounter with Hillary lasted maybe a minute, it was unforgettable. I came away fully committed to supporting her as the best qualified person to lead our country who just happens to be a woman.
Plus, I came away with a selfie!