Mount Kisco–When Jean Farber, a trustee for the village of Mount Kisco, heard that state Senate candidate (40th District) Alison Boak would be gathering a group of child sex abuse survivors and children victim advocates at Town Hall, she didn’t hesitate. She agreed to also join the community gathering on August 31 during which Boak promised to fight for the Omnibus Child Victims Act passage in the New York State Senate. Its passage would help get predators off the streets by changing the current Statute of Limitations. 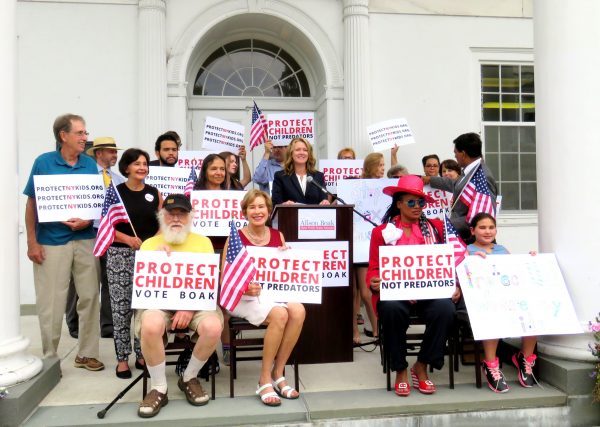 “How can you not support this if you love children? I’m overwhelmed with disbelief that something so simple has not yet been passed,” said Farber. “I can’t wrap my brain around it.”

‘Ali’ Boak feels the same way, so she assured those gathered that she will push for passage of the act that will eliminate the statute of limitations for new incidences of child sexual abuse. “It will allow victims who have already been abused one year to seek justice against their abuser.” Under current New York State law, a victim of childhood sexual abuse must report that abuse or file a lawsuit against the parties responsible by their 23rd birthday. Since studies show that it takes a survivor an average of 21 years before they can disclose their abuse, the current law robs many survivors of their opportunity to seek justice, Boak explained.

Boak touted a track record of 20 years addressing exploited or trafficked youth, and said passage of this bill would be her immediate priority.

On the steps of Town Hall, child victims advocate and child sex abuse survivor Gary Greenberg, who has put up $100,000 of his own funds for a Fighting for Children PAC said:  “Predators are prowling our streets…either you are with the victims or you are with the predators.  We need a Senator in place who will fight for the victims.

“Victims don’t forget,” Greenberg noted. “I can tell you what my abuser was wearing 30 years later. In 50 years, nothing has changed in this state.” He called New York “the worst” for being “behind the rest of the country on this.”

A second speaker, Andrew Willis, CEO, Stop Abuse Campaign: noted CDC stats indicating one of five people will be sexually abused before they are 18. “It’s a bigger problem than childhood cancer.”

Willis said he was raped at age 10. “The statute of limitations protects rapists; it doesn’t protect children like me.”

“Sex offenders belong on sex offender registries; they do not belong on our streets,” he continued.  “We  need to pass this act to make sure predators are held accountable. Some 90% of sexual predators don’t see jail time, according to a  2008 study by Robert Baker of the Massachusetts Sex Offender Registry Board, Massachusetts Office of Public Safety.

In his own case, he stated: “It took 21 years to disclose the abuse; shame and fear lock you down. Creating an environment in which kids can come forward is critical to prevention.”

Following the rally, Boak also issued a statement to the media addressing the sexual abuse scandal in Chappaqua, that of Greeley Drama Teacher Christopher Schraufnagel (who will be facing sentencing soon in New Castle; Justice Kraus is reviewing a plea deal in the case which could preclude him from being placed on a sex offender registry).  Boak thought that was wrong: “I think all child sexual predators should be required to be on the sex offender list.  The allegations pled guilty to should require him to be on a sex offender registry.”