Editor’s Update: Over $100K has been raised providing over 3K meals so far, from the New Castle Donates Meals to Health Care Workers fundraiser.  “However, we do not have enough funds to keep going at this pace,” said Robert Greenstein. “Let’s keep it going. Please consider donating, making another donation or sharing with your friends. We are all in this together.” For more information, and to donate:

April 1, 2020, Chappaqua, NY — Over the past three weeks, it seems like everybody’s lives have come to a halt. Students have been sent home from school, flown back from study abroad programs, parents are no longer commuting into the city and many have lost their jobs. However, the lives of our healthcare workers and first responders have done anything but slow down. And thanks to an idea thrown together over the course of a few days by three of Chappaqua’s own, the lives of restaurateurs in our town are still going strong as well. 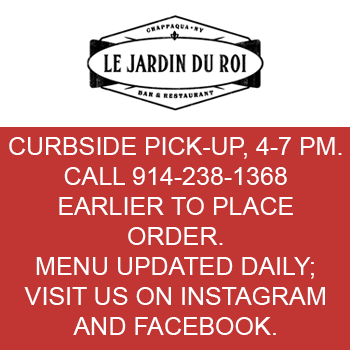 Former town supervisor Rob Greenstein, manager of Chappaqua Moms Georgia Frasch, and legal recruiter/Chappaqua Mom Deborah Garfield have taken the idea of lending a hand to the next level. They saw the need to both help support healthcare workers and local restaurants, so naturally, it became their mission to simultaneously help relieve both efforts.

A week ago, the three of them put together a GoFundMe page for the community and neighbors where money would be raised to pay for meals from our restaurants to be delivered to healthcare workers at Northern Westchester, Westchester Medical Center, Maria Fareri Children’s Hospital, Phelps Hospital, White Plains Hospital and Montefiore Hospital, along with local ambulance corps and first responders.

Like Greenstein said, “It’s a win-win, which is always the best situation.”

Over the course of seven days, the fundraiser has raised more than $60,000 to go toward serving pizza, tacos, sandwiches, etc. to over 1,000 local healthcare workers and first responders.

“We never thought it would raise this much money, but it’s just wonderful. I think it also fills a need for people who want to do something but can’t leave [their] house…the options are very limited and people don’t want to feel helpless,” Frasch said.

With the help of those who donate, restaurant owners can now bring back workers that they had to furlough and the organization has been able to incorporate the help of another local business that was impacted by the virus.

Chappaqua Taxi and Limousine was brought into the picture once it was made clear that not all of the participating restaurants even had delivery services.

“We’ve literally been troubleshooting and flying by the seat of our pants,” said Garfield, Vice President at Howard-Sloan Legal Search, in response to the rapid elevation of the fundraiser along with problems that have come with it.

And when it comes to giving each restaurant a fair share, they are trying their best.

“We are not placing the orders. What we are trying to do is not get in the middle,” Garfield said. This is done by simply recommending the unit order from elsewhere for a different meal. A scheduled chart is a thought in the works by the team, which would help create more structure, balance and less confusion for both the restaurants and those ordering.

Due to the fact that these doctors and nurses have no time to sit and eat, a slice of pizza or a little taco is easy to grab on the go. Because of this, the trio sat down with our dine-in restaurants such as Le Jardin du roi and Ibiza Kitchen to try and formulate a smaller, more tangible menu.

Despite the three organizers having their own families, lives and jobs to manage, they’ve completely thrown themselves into this project. Never imagining how big and complicated it would get so fast, they’ve even spent all-nighters working around the clock to make it work.

“It’s been an amazing partnership with the two of them. We haven’t formally decided who is doing what, we just have fallen into what we are naturally good at. [We’re] trying to step up and take whatever comes at us and make the best decisions we can,” Garfield said.

In terms of how long this will go on, they plan to keep it running as long as they possibly can.

“The thing that I’m concerned about is if you listen to the news, we haven’t even hit our peak impact yet. I hope people continue to support this and help healthcare workers get through the worst of it, which is really yet to come,” Frasch said.