Speaking for a second time in recent months from near a railroad tracks crossing in New Castle–where new incidences continue to raise serious concern among residents and public officials–Congresswoman Nita Lowey said she would initiate a high profile public awareness campaign regarding safety at railroad crossings. Federal and Metro North officials also addressed the potential for a bridge over the crossing. 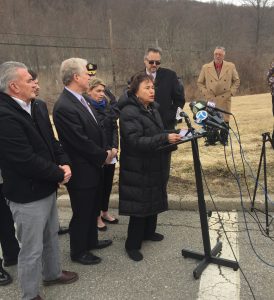 “Just yesterday a van was on the tracks as a train approached.The train slowed as the van broke through the gate, avoiding a crash, but it is at least the second close call this month.” Lowey summed up the safety issue of on-grade railroad crossings, and, in particular, the crossing adjacent to Chappaqua Crossing and Horace Greeley High School.

“The safest grade crossing is one that doesn’t exist,” she continued. “But with more than 212,000 public and private crossings around the country, we must tackle this important safety challenge with a multi-faceted approach, including eliminating the most dangerous grade crossings.”

Per Lowey, aspects of the public awareness campaign include making sure drivers know what to do, and what not to do, when they approach the crossings, and ensuring cooperation among all levels of government.

Asked if the proximity to the high school and the planned residential and commercial development at Chappaqua Crossing would influence the decision as to whether the Roaring Brook crossing would be considered for changeover to a bridge as requested by Supervisor Rob Greenstein, Giulietti responded that there are ongoing meetings between the state, town, MTA and Metro-North. “How do you prioritize? We are aware and are looking at things that can be done now. Those meetings have been taking place and will continue to take place next week.”