Camp counselors, lifeguards, the desk at the pool: teens join the workforce in droves when school’s out, often taking these classic summer jobs. But some entrepreneurial local teens–and even younger kids–will spend this summer working for themselves, at new businesses or endeavors they started. They’ll make money but they’ll also be paid in life lessons other young people may not necessarily learn until after college. 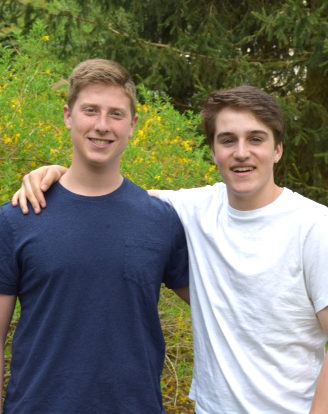 Mac Yavner and Spencer McGowan, both 16 and juniors at Horace Greeley High School, are the third owners of Teen Agency (teenagency.org) which matches teens with community members who seek to employ them. “We hope to develop (the agency) and we hope to sell it when we graduate from Greeley,” McGowan said. “We started with parents asking us for babysitters and tutors but one of our goals was to get different kinds of jobs.”

After working on getting more visibility for the agency, different requests did come in. A homeowner wanted logs moved so Yavner and McGowan enlisted friends who play football to put some muscle into it. Then an elderly couple asked for someone to change the batteries in their smoke detectors, and word spread in their development about that service. “Word gets around,” Yavner said. “Before Thanksgiving, one person asked for help moving furniture, then a lot of people asked for the same thing.”

Yavner and McGowan are in business for the experience; they will madonate their profits to a food allergy charity that helps people who can’t afford epipens and don’t have insurance.

But they both say they’re really profiting by what they’ve learned. “What you put in is what you get out,” Yavner said. “If you try to make money and be successful it’s definitely within reach,” McGowan added. 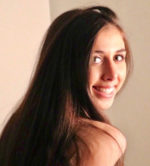 Byram Hills High School Senior Chloe Perline has been running her jewelry-making business, Bijoux by Chloe, for about three years, and she plans to continue her efforts while at Syracuse University next fall. “I started making little bracelets a few years ago and my friends really liked them,” she said. That led to the creation of a website, bijouxbychloe.com, and Perline said her business is going very well, and she’s learned about a lot more than jewelry making. “There’s a lot to it,” she said. “Figuring out pricing and marketing–it’s a lot of work but it’s really fun too.” 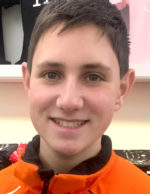 Mason Greenstein,14, and a freshman at Horace Greeley, is a student with a competing business called Rentateenager.com that provides responsible teenagers to perform various jobs.  “We offer a less expensive option than professional expert services. Some of the services we offer include sports coaching, tutoring, baby sitting, dog walking, yard work, after school drivers, photographers and anything else that a teenager can help with,” explained Greenstein.

Greenstein feels that the business has taught him to hone in on his organizational skills. “I have a lot of teenagers offering their services. I also have a lot of people who want teenagers for various jobs. Everything needs to be organized so I can promptly provide the right teenager for specific requests.” 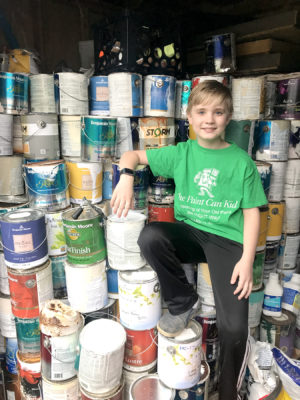 The Paint Can Kid

In Chappaqua, 11-year-old Michael Weyne has joined the ranks of the hamlet’s younger entrepreneurs as The Paint Can Kid (the name, by the way, is trademarked.) Weyne will come with his dad, Jonathan Weyne, to pick up old paint cans for a mere $2 per can–and for a lot of cans there’s a volume discount. Handling old paint cans wasn’t Weyne’s first business idea –he had another plan but realized he needed startup money.

“He asked me how to get capital,” Jonathan Weyne said. “I said you could have it, borrow it, or earn it–so I challenged him to start a summer business and earn $10,000.” Weyne overheard his dad and a neighbor discuss getting rid of paint cans, and another business idea was born. He researched his idea extensively and launched The Paint Can Kid last summer, when he was 10, and gave out more than 25 flyers to people listening to music on a summer evening at the bandstand.

Weyne wound up with so many prospective customers, he was booked 4-6 weeks out. He takes the cans and sorts out the cans that have a lot of good paint left. Those, he found, Habitat for Humanity will take, so he’s currently setting that up. As for the rest, Weyne empties the paint into a large bin because he and his dad, a physician who runs clinical trials for biopharmaceutical company Regeneron, are inventing a machine that will separate out much of the water so the remaining paint can be recycled and used. They crush the cans and recycled 133 pounds of steel this past Earth Day.

Will he make it to $10,000 this year? Weyne estimates his chances at 70/30. After all, he’s making money but he’s also spending it–and learning all about business expenses like gas and mileage.

Michael “filed his first income tax return this year,” Jonathan Weyne said, adding that the business is an LLC. While Jonathan Weyne acknowledged that it has been time-consuming helping Michael with his business, he said he truly enjoys this time with Michael (and with Michael’s younger siblings, Alex and Nicole, who are occasionally enlisted as unpaid interns). The Paint Can Kid can be reached at 914-200-3344.

Jake Horwitz, who is currently running Turning Point Tutoring from Scotland as he studies abroad, took over the business from his brother Robbie, who started it as a junior at Greeley. Horwitz said it’s doing well and he currently employs 12 tutors. He credits his success to “great students at Horace Greeley” who serve as tutors, and calls customer service “essential.”

“The most important part of a small business is the people,” Horwitz, 20, a junior at the University of Pennsylvania, added.

From Sneakers to Snapshots

Greg Skriloff, a junior at Byram Hills High School in Armonk, offers web design and development as well as photography –his website is greg.skriloff.com. But his start in business was buying and reselling limited edition sneakers, a lucrative effort he continues to this day. “That’s when I’d date back my entrepreneurship in general to when I was 11 or 12 years old. I’d set up a whole process, get a few pairs from each release and re-sell them.” Skriloff  “It really teaches you how to separate yourself and manage your time,” Skriloff said. “For example, a kid in high school would ordinarily be going out on a Friday night. But a business changes your priorities.”