Finding ways to express oneself is an individual journey. No surprise, I found my personal outlet in writing.  For others, there are a myriad of creative outlets that exist. For Pia Haas, Director of The Armonk Players, her outlet was always the theatre–acting and directing.

Pia began developing her love for the theatre at a young age, starting her acting career in elementary school. By high school, her interest in acting had grown significantly, but her love for Biology reigned supreme. Pia intended on majoring in Biology. Before matriculating though, she met someone who would become her mentor who changed all that.

Pia met Mort Clark who gave her a taste of the life in the theatre. He was the chairman of the Arts Department at SUNY Westchester Community College and he exposed her to the many exciting aspects of theatre as her teacher and mentor.  Based on those experiences, Pia chose to pursue theatre as her major in college. After graduating from Sarah Lawrence College, she started teaching part time at the college, while also performing. She succeeded in landing a variety of roles from commercials, to soap opera appearances (The Guiding Light and One Life to Live!) to plays.  She sought a steadier form of income so Pia next went back to school to get a Masters in Educational Theatre at NYU.  With Masters in hand, she began to teach both Acting and Directing at Westchester Community College as an Associate Professor. At the same time, Pia directed the theatre group called The Theatre Connection and was also freelancing as a Director on the side. Pia was one busy lady!

After 10 years of teaching at Westchester Community College, it became too much to manage along with raising her three children. Pia gave up teaching and focused on freelancing. In 2000, Pia was approached to work for the newly formed Armonk Players.

The Armonk Players annually does two main stage productions and three to four staged readings where the actors carry scripts. The Players just wrapped Mothers and Sons, and will be doing a one day staged reading on 12/16 called Looking at Christmas, a light hearted fun comedy. Next up is Love, Loss and What I Wore in February, also a staged reading.

Their next main stage production has not yet been determined. Now 15 years as the Director, Pia speaks fondly of The Armonk Players. She said that her fellow actors and peers “became like a family.” She continued to say that “working with such a great group of people made it fun, made it my outlet.” While Pia predominately directs the productions, she occasionally acts as well–something she called “the ultimate creative outlet.”

Pia’s three children have “all dabbled in acting and directing”–as middle schoolers, campers and then as counselors.  Pia’s eldest daughter leverages some of those skills and techniques learned when she was younger with her students at a New York City Montessori charter school where she teaches. 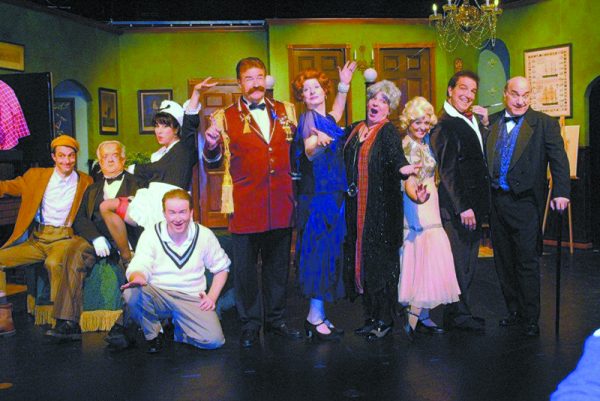 Want to express yourself but acting isn’t your forte? There are many ways to be involved with The Armonk Players without being an actor. Pia suggests that creative involvement can include set building, costume design, building /designing props, make up, gathering music, social media/publicity, poster design and execution, programs. If interested go to the website: www.armonkplayers.org

As if she weren’t busy enough serving as the Director of the Armonk Players, Pia also does all Public Relations for the Westchester Broadway Theatre, and most recently helped promote a stellar production of Showboat. For those of us who may not be theatrically inclined but still enjoy watching productions, there are two great options to see the fruits of Pia’s labor!

Heather Skolnick, husband and three children reside in New Castle. She works for a major retailer on their Omnichannel Strategy. While Heather is not theatrically inclined, she enjoys writing for Inside Chappaqua and Inside Armonk as a vehicle for self-expression.