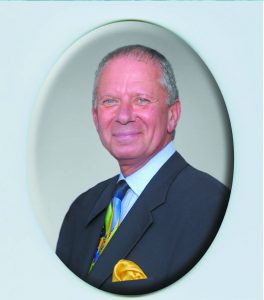 When Gerry Golub and his family moved to Chappaqua from New Jersey in 1971, they wanted a bigger house, a great school district, and a bucolic suburban town not too far from Golub’s job as an accountant in Manhattan. Golub never imagined that he would become such an integral part of the town he chose to call home.

Golub, who passed away on the 9th of October in 2015, was a fixture in Chappaqua. “After he died, I received so many letters, thanking him for everything he did for people,” says Bonnie Golub, the love of his life and his wife of more than 54 years. He was an active volunteer who served as Fire Commissioner between 2009 and 2014, as a member of the town’s Zoning Board of Appeals, and as a pollster for the Board of Elections. More significantly, he was known throughout town by his friends and loved ones as a class act with a great sense of humor.

Golub grew up on Ocean Parkway in Brooklyn, attending Yeshiva of Flatbush and Stuyvesant High School. He came from a family of modest means and was always determined to achieve financial security. He graduated from Brooklyn College with a degree in accounting and worked as a CPA for 50 years. He started his own firm, Goldstein Golub Kessler & Co, and became Managing Partner of the firm. When he sold his firm to American Express in 1998, the first transaction for the sale of an accounting firm into a large corporation, Golub served as Chaiman of American Express Tax and Business Services. From 1994 through 2000, and then again in 2003, Golub was on the elite list of Accounting Today’s “100 Most Influential People in the Accounting Profession.”

While he was an innovative and dedicated businessman, Golub’s true passion was his family, starting with his wife Bonnie, whom he met at a school fair at Brooklyn College. Golub and Bonnie were engaged nine months after their first date, married seven months later, and graduated from college as a married couple. They have three children, Kenny, Laurie, and Alli. Yet, he was most proud of his six grandchildren, upon whom he doted endlessly. “He always said that grandchildren are the best part of having kids,” muses his wife. “He was larger than life,” notes Bonnie. She says that Golub did everything to excess and had a great sense of style and was a genuine “clothes horse” with a tie collection of more than 450 ties with matching hankies.

“Gerry had a separate wardrobe for every outing, a golf wardrobe, a dressy wardrobe, an everyday wardrobe,” says Bonnie. But he was most proud of his Harley wardrobe, which he acquired over the past 15 years when he bought his beloved Road King. “After forbidding his kids to ever ride a motorcycle, he went out and bought a Harley,” laughs Bonnie.

According to his wife, Golub had a great interest in machines and anything that moved. He was extremely interested in cars, and he was always up on the latest information about them. If you wanted to buy a car, he was happy to negotiate the deal and always knew the ins and outs of every purchase.

Bonnie, who clearly misses her husband every day, says that he was passionate about life and constantly looking toward new and exciting experiences. “I was surprised that he never took flying lessons.” It is clear that he was exceptionally happy on the ground in Chappaqua surrounded by his close-knit community and loving family.

Deborah Raider Notis is a freelance writer and co-owner of gamechanger, LLC gamechangernow.com, a free referral service connecting Westchester families to highly qualified, competitively priced academic, athletic, music, and art instructors. In addition to writing multiple articles for the Inside Press, Deborah’s writing can also be found on suburbanmisfitmom.com.