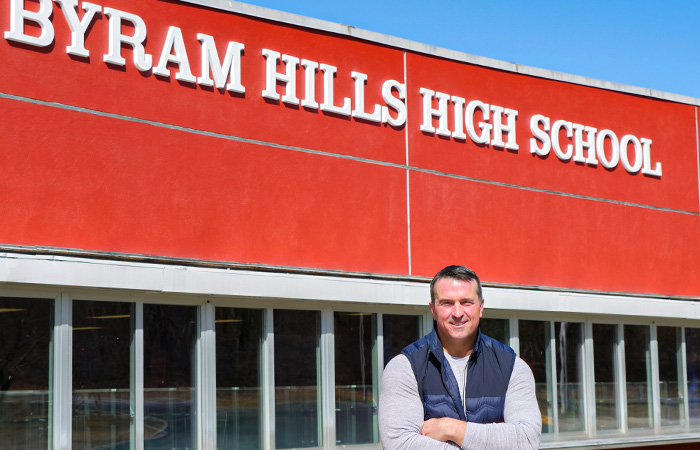 Byram Hills High School students watched a powerful and heart-wrenching video on the rise of former NBA player Chris Herren and his drug addiction and downfall. Then, as the lights came up, the high school theater fell silent as Mr. Herren, sober since 2008, began to speak.

He told students he knows the feeling of thinking that you don’t need to hear words like his about drugs.

“Just like some of you, I wanted to skip this talk,” Mr. Herren said to the juniors and seniors in the theater and the ninth and tenth graders who watched via livestream on March 8. “Just like a couple of you, I tried to convince my mother to let me sleep in and get some rest because we don’t need this talk. And just like some of you, I’ve walked into this talk with the attitude, all I do is drink and smoke, drug assemblies are a joke. It’s wild that they think I would turn into that guy.”

“That attitude comes from what I believe is the way we’ve irresponsibly talked to kids about addiction,” added the straight-talking Mr. Herren. “I think we put way too much focus and energy on the worst day and we forget the first day.”

The video traced Mr. Herren’s start as a high school basketball legend in Fall River, Massachusetts, and his turns playing for Boston College and Fresno State. He was drafted by the Denver Nuggets in 1999 and traded in 2000 to the Boston Celtics, a dream come true. But he was living a secret life. Interspersed with his basketball success was drug use, being arrested and multiple stints in rehab.

Students learned of Mr. Herren having his first taste of beer as a young teenager, using cocaine at Boston College, taking Oxycontin, shooting heroin, and the desperate need to obtain drugs, including right before game time.

His mom, he said, never believed her son, a McDonald’s All-American basketball star, would spend her money on drugs. “Let’s just be real,” Mr. Herren said. “I’m 16, spending my mommy’s money on drugs. I’m 16 years old, lying to everybody who loves me right now. I’m 17 years old and my family doesn’t even know me.”

“That’s the scariest thing about drug addiction,” he said at one point. “Nobody knows who has it yet.” He added: “Parents don’t ask, and kids are afraid to talk about it.”

Who in the audience, he asked, would want their adoring younger sibling doing what they are doing in high school, keeping secrets, pretending everything is great, feeling so insecure that they need to drink to have fun.

“When we can envision that, it doesn’t seem so right any more,” he said. “This is no longer my story, it’s your story. See, the goal is that you walk out of here and you think of the kid you’re becoming.”

“My goal is that one of you walk out of here and say to yourself, ‘I want to feel better. I want to talk to someone. I don’t want to pretend everything’s right.’”

Principal Christopher Walsh was hopeful that the presentation would help students and families feel supported, and he urged students in need to ask for assistance.

“Substance abuse and addiction touch every part of society and it has gotten worse for many people during the pandemic,” he said. “Many families are suffering in silence. I hope that Chris Herren’s message helps people realize that they are not alone.”

“I thought it was really impactful to hear because I think it’s definitely very normalized, drug use and drinking on the weekends,” senior Sofia Cobos said. “It was a really great talk. It definitely needed to be heard. It was a very, very eye-opening experience.”

Ninth grader Brody Ceisler said he learned that “even though somebody might not look like something on the outside, you never know what’s happening on the inside of them.”

Mr. Herren has shared his story with nearly two million high school students, hoping to make a difference early in their lives. He runs the nonprofit Herren Project, which empowers schools to make healthy choices while guiding families through recovery, and Herren Wellness, a residential health and wellness program that helps people live substance-free lives.