Story and Photos by Stacey Pfeffer

The Robert E. Bell Middle School was buzzing with young scientists and computer coders from throughout the county tinkering with their Lego robots and presenting their science experiments before a judging panel. The elementary and middle school students were participating in an international competition called the First Lego League (FLL), which took place for the first time here in Chappaqua in late January. 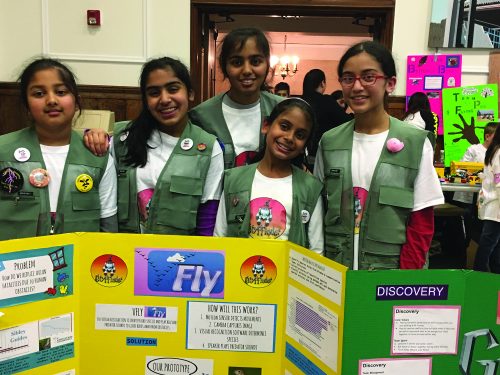 At the Bell event, there were 12 FLL teams vying for the championship with towns such as Ossining, Briarcliff Manor, Larchmont and Scarsdale represented along with several teams from Chappaqua.

FLL teams are judged by a panel and participate in the event by programming an autonomous robot to score points on a themed playing field (known as the robot game) and developing a solution to a problem they have identified (called the project), all guided by FLL core values such as teamwork, friendly competition and finding solutions. All FLL teams are mentored by a coach (usually a parent) but the robot and project components are done exclusively by the children.

This year’s FLL theme for the project component was called Animal Allies, which explored how humans and animals can interact better. Team Gryffindor, a team with participants from Chappaqua and Ardsley chose “ How do we reduce avian fatalities due to human obstacles?” as their project.

The middle school students were pleased to speak with leading experts in the field such as ornithologists, bird enthusiasts and Audubon Society representatives.

The team eventually won the robotic design component and placed second overall this year, advancing to the regional semi-final tournament in Poughkeepsie this February. The team also participated last year in FLL and advanced to the world competition.

“I think that curiosity, enthusiasm and team spirit are the key attributes that differentiate Team Gryffindor. They have come together as a team, complement each others skills and they learn from each other. Curiosity leads them to dig deeper into problems, helping them come out with innovative solutions,’ said Ardsley-based co-coach and parent Rajat Goel. His daughter, Khushi loved being in FLL because “we [Team Gryffindor] get to work together, learn many different life skills, such as programming, research and presentation. All this is done while having fun. This also gives us an opportunity to look at some of the world’s biggest problems and try to solve them.”

There were also several junior teams who participated in the event. Augie DeRose, a third grader at Roaring Brook Elementary School with his team the Chappaqua Minecrafters worked on a project called Stop the Mite. Augie said he enjoyed building the Lego model and working with his team every week led by co-coaches and Chappaqua parents, Rosemary Chi and Gene DeRose. Brenda Kavner DeRose, Augie’s mother commented that “the big lesson was working as a group, incorporating everyone’s ideas and learning how to present it.”

“Kids in the FLL program, do well because they are very motivated, and want to make a difference in the world. For most, it is the first time that they work on a long-term project where they can have an impact.

The robotic part of the competition is also a popular draw. FLL also places a considerable emphasis on collaborative skills, like gracious professionalism, and cooperation/competition, which are some of the most important work skills kids may have,” noted the event’s organizer Alexandre Eichenberger, a Chappaqua father, IBM employee and past FLL team coach and judge.

Eichenberger noted that the FLL event was a collaborative effort with help from the PTA and the PTA STEM committee, in particular.

The Chappaqua School District also supported the event in terms of logistical help and encouraging students to participate in the competition. Joshua Block, the District’s Director of Mathematics, was instrumental in the success of the event and liaising with the District. Town Supervisor Robert Greenstein and Eric Byrne, the Assistant Superintendent of Curriculum and Instruction, both spoke at the event.

Block, who served as a judge at the event noted that, “Besides the valuable skills the students learn from FLL, I admire how persistent they were to overcome challenging obstacles in solving the problems, and produce working robots. That is probably the most important thing any kid can learn, and will help them succeed not only in school, but their careers.”

Currently the district is in the middle of developing K-12 STEAM skills and curriculum and looking to involve the entire school community in their efforts. “The PTA STEM committee has been a huge help in this, especially with their STEM fest that they are hosting on April 29th,”added Block.

“If you have a chance to attend a FLL competition, you will see numerous examples of teams helping each other, from lending each other missing parts, giving each other tips on how to build or program better robots, and generally just helping out.

The goal of FLL is to make a sporting event for children engaged in STEM- related activities and make it fun and encouraging,” said Eichenberger. For more information about FLL, please visit www.firstlegoleague.org.