One of the most wonderful aspects of being a publisher is the opportunity to meet and get to know and be friends with talented journalists, photographers and illustrators around town. I have had the privilege of publishing photos by Marianne Campolongo many times over a 12-year period of publishing. That includes different cover photos including ones of Hillary Clinton, when she was running for her second Senate term, and of Bal Agrawal, owner of LifeWorx in Chappaqua. Marianne is also a fine and sensitive writer.

I was thrilled to learn that her photos were being included as part of an exhibit of members of the Red Circle PhotoArts Cooperative. Marianne’s and her fellow artists’ photos may be viewed (and or purchased!) at the Upstream Gallery in Hastings Thursday-Sunday, from 12:30-5:30 p.m. until August 30th. Below, Marianne (on the right) and myself in front of her photos, along with my personal favorite, Summer Meditation. 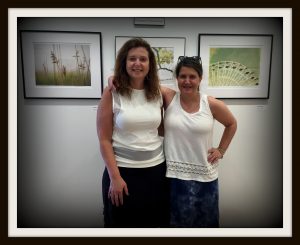