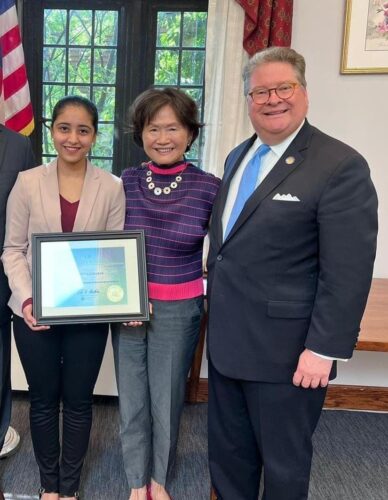 This award honors students who have demonstrated exceptional leadership qualities in their school and community and are dedicated to becoming a positive force for change. Well-rounded students who display leadership potential are nominated for this prestigious awards program by teachers, administrators, or other faculty members for their achievements in academics, athletics, arts, and community service. This award was presented to Netra by New York State Senator Peter Harckham (District 40).

Netra is an academically high-achieving and promising young adult who demonstrates initiative both inside and outside the classroom, serving as a role model for her peers. She is an Editor-in-Chief of the Greeley Tribune, Director of Tournaments for Debate, a Vice-President of the Chappaqua Schools Foundation Student Advisory Council, and a Peer Leader. She was also selected to represent Horace Greeley at the League of Women Voters of Westchester Running & Winning Conference.

Netra’s interest in government affairs and international relations began with her involvement in Model UN. She has won Best Delegate Awards at several prestigious collegiate conferences, including Yale MUN, MIT MUN, and Cambridge MUN, and has also chaired international conferences.

To further her passion for youth-led political advocacy, Netra has been engaged in several real-world opportunities. She was a member of Congressman Mondaire Jones’s Youth Advisory Council and interned with State Senator Peter Harckham and Assemblymember Chris Burdick during the school year. This summer, she is interning with the Hudson Valley Office of U.S. Senator Chuck Schumer and continues to gain valuable work experience through a Summer Fellowship with the office of County Executive George Latimer.