Chappaqua, June 13–On the steps and floor of the South Greeley Avenue gazebo or on the soft field of grass, and under a gradually darkening sky, Chappaqua residents stood together either silent or in song during a vigil to honor the victims and their loved ones in Orlando–and to hear and be comforted by the words of area clergy and public officials, and also to begin the hard work of making sense of Saturday night’s horrific massacre.

The crowd was led in singing Ya’aseh Shalom (a prayer for peace) by Star Trompeter, the Cantor of Temple Beth El of Northern Westchester, and Amazing Grace, led by Dr. Martha Jacobs of the First Congregational Church.

Rabbi Jonathan Jaffe of Temple Beth El of Northern Westchester opened the ceremony noting “already stories of courage and faith abound from the victims and survivors,” and that “in such moments we have the opportunity to bring godliness into the world.” He thanked Dawn Evans Greenberg and New Castle Town Supervisor Robert Greenstein and his fellow clergy for making the event possible. “Let’s support one another through our grief and heartache while committing ourselves to the hard work of making a more peaceful world a reality.” 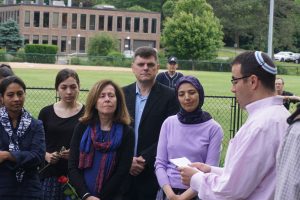 Supervisor Greenstein reminded that “more love and less hate stands for a better tomorrow…
“Love serves as both our shield to protect us and our sword to fight hatred and violence and intolerance.” 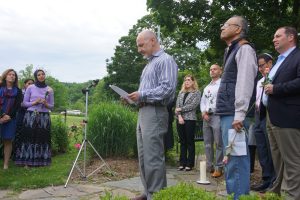 Dr. Jacobs spoke of the critical need for unconditional love in all our lives and to not allow hatred to poison our outlook or our souls. She asked that everyone reach out and support members of the LGBT community, as well.

“No one is spared from grief and sorrow in our world; it’s the price we pay because we love, we all have grief and we all have sorrow. For those who decide to kill each other and cause such sorrow, I truly have a hard time believing that they have experienced love, absolute love, unconditional love. Because once we experience love, it is something that draws us back again and again to be with people in our lives….” 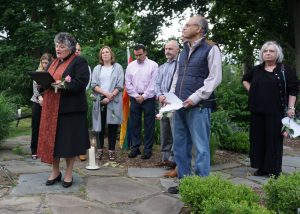 “The best we can do is share the love with all those with whom we come into the contact. I pray in the aftermath of this horror we can find ways to support and honor our lesbian, gay, bisexual, transgender and queer friends and neighbors while also being mindful of the cost that gun violence brings to many communities every day…Even while we may disagree I call on us to be more mindful of those directly affected by gun violence–not only in Orlando but across the country…
“Jesus tells us to love our enemies, but that does not mean that we are to be silent in the face of such a horrific act of killing people in the so called name of someone’s God.”

Dr. Jacobs reminded that while we may be angry, “hate will not stop the cycle of violence, not in this country, not anywhere in our world.”
And she recalled the words of Martin Luther King:
“Returning violence for violence multiplies violence adding deeper darkness to a night already devoid of stars.”
“Darkness cannot drive out darkness; only light can do that.”
“Hate cannot drive out hate; only love can do that.”
“Hatred paralyzes life; love releases it.”
“Hatred confuses life; love harmonizes it.”
“Hatred darkens life; love illuminates it.”

Khusro Elley of the Upper Westchester Muslim Society offered poignant words affirming Muslim beliefs: “As Muslims, we can and do condemn in strongest possible terms the killing of innocent people in Orlando. It appears the only crime in the eyes of the killer was the sexual orientation of the victims. We should urge our lawmakers for the harshest measures for hate crimes and take whatever measures are available to prevent such dastardly acts… 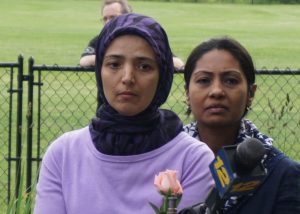 “I am proud to stand in solidarity with all other faiths and all other the people in Chappaqua to mourn the untimely deaths of all the victims in Florida, many of them still in the prime of their life. May God grant us the courage to overcome this loss.” 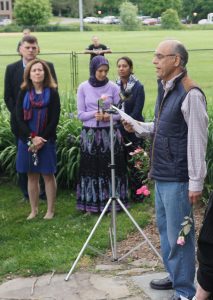 A representative for Congresswoman Nita Lowey reminded that the gun purchase by the terrorist perpetrator was legal. “He was a citizen much as any of us here.” She said that Lowey firmly believes and will fight for a ban on such weaponry. “We have to try. For every person who says it won’t stop anything, if it stops one person from doing something this awful, she (Lowey) says yes, let’s try.” 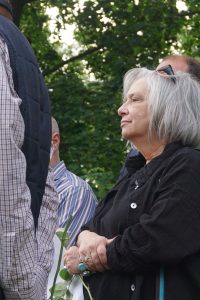 The final speaker was Chappaqua’s Sheryl Goldberg Manassee, a member of Moms Demand Action for Gun Sense in America. Dressed in an orange tee, Manassee read from an essay written by an openly gay young woman whose identity she did share at the event, but Sheryl and the young lady’s family have since asked The Inside Press for her anonymity. She wrote that she had attended and “had a great time” at the Los Angeles Gay Pride Festival the night before learning of the massacre and of how her sense of safety has been shattered. She pointedly reminds that you don’t need to be gay to feel unsafe, either. 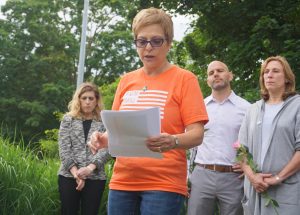 “This is what it feels like for her…,” began Manassee.

And speaking metaphorically to the terrorist, she asked: “Did you think of these people as individuals? Did you check to see that your friends were not one?”

Manassee reached out to those in attendance. She handed out 50 pennies to place down in a location in remembrance. “50 people. Take 50 pennies. Line them up and think of each as a life that was taken last night. Each one is my brother and my sister and each one of them is targeted. 50 people whose friends and families will never be the same. 50 people who left their dogs at home, their mothers or lovers, who said, I’ll be right back…” Single stem pink roses donated by Whispering Pines of Chappaqua were also placed to honor the victims. 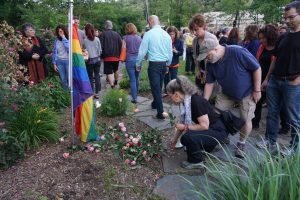