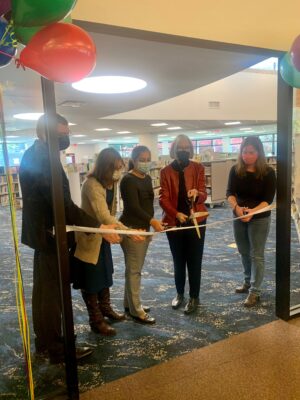 Pamela Thornton, prior director of the library when the project was first started, shared the origins of constructing the Children’s and Teen rooms. In 2012, almost ten years ago, Chappaqua residents were surveyed regarding their hopes for the future of the library. The public agreed that they wished for more space for kids from all schools and ages in Chappaqua to come do work, connect, and most importantly, read. However, when the master plan for this project was developed in 2013, the cost was an overwhelming two million dollars.

While Thornton had aspirations for new children’s and teen spaces, it was too far out of reach. That is until they were granted a bond in 2016 that was soon after approved by the community. The construction began promptly in 2017 and took three years to finish. However, the completion came right in time, as the library turns 100 years old next year. “What a milestone to have this space that will take [us] into the next century,” she said.

Katherine Whymark, President of the Friends of the Chappaqua Library, the fundraising arm of the library, then spoke about the furniture they were able to supply to the library including the teen room technology, courtyard chairs, children’s room custom desk, window bench, upholstery, built in benches, and more small items. She thanked the Chappaqua community, without which this project could not have been possible.

This new space creates a safe environment for children and teens to take advantage of books and all they have to offer. “Our library is the heart and hub of our community; a gathering place for the exchange of ideas and lifelong learning. Instilling a love of books is so important for young people,” said Ronni Diamondstein, President of the Board of Trustees for the Chappaqua Library, “…so let’s cut this ribbon and open a whole new world of books and adventures for our young people, our future.”

More about the renovations previously reported by this press: https://www.theinsidepress.com/a-visit-inside-the-chappaqua-librarys-spacious-new-teen-childrens-rooms/

Alexa Troob, a junior at Horace Greeley High School, lives in Chappaqua with her parents, two sisters, and two dogs. Her hobbies include soccer, tennis, running, traveling, painting, and of course, writing. She writes for the Greeley Tribune and now, Inside Press Magazines, in order to pursue her interest in journalism.