A New Program of the Holocaust and Human Rights Education Center

First-hand, personal testimony from Holocaust survivors and liberators–the victims of and witnesses to the Nazi brutality–is one of the most critical and impactful educational tools available to educate students, teachers and the community-at-large about the dangers of bigotry and hatred.

Now, 67 years after the end of World War II, these eyewitnesses are aging and declining in health and numbers. The opportunity to personally hear and witness their stories ultimately will come to an end. Today’s students and teachers will be the last generation privileged to meet and interact with a survivor in their classrooms.

To preserve their testimony for future classroom use, the Holocaust and Human Rights Education Center is partnering with schools in Westchester to create the Survivor Legacy Education Project, a video archive with teachers’ guides centered on the school presentations of local Holocaust survivors and liberators. Each participating school has agreed to host a taping of the survivor with students and teachers and to “adopt” the survivor’s story as the basis of its Holocaust and human rights curriculum.

All parents shudder at the thought of a missing child.  For those whose offspring are autistic, the fear is particularly prevalent.  In recognition of the need to protect this segment of the community, the New Castle Police Department has become an active participant in a novel venture entitled:  Kind Find.

Officer James Dumser, program manager for Kind Find in the town of New Castle learned about the program recently when he attended a seminar called “first responders and individuals with autism; averting crises and preventing disastrous consequences” on March 27.  The mission of Kind Find is to have all parents with children on the autistic spectrum register their children with the police department.  This will insure that when the department receives a call regarding a certain child or residence, information will instantly appear on their screen, advising them of where the person falls on the spectrum of autism.  This knowledge will in turn inform the manner in which the department approaches the individual.  “Kind Find will help us out immensely,” Dumser observed.

The program is mutually beneficial for families and the police department.  According to Dumser, the interpretation of responses from an autistic individual are not always self-evident.  Sometimes, “We think the person is trying to harm us when they are not,” he related.  Officers are trained to understand that one-word answers are not always the result of a negative attitude.  Instead, they may be the dominant way in which a person communicates.

Information on triggers; actions that set off an autistic individual such as approaching too closely or touching, are especially helpful.  Additionally, any insight into what the child responds best to such as trains or video games, will facilitate the department’s efforts to assist.

Registration forms are available at the police department and at ncpd.info/forms.  Extensive information on the program is at kind-find.com.  Officer Dumser may be reached at 238-4422 or jdumser@town.new-castle.ny.us.

Story Walk and Reels and Reads.  Perhaps you know a lucky kid who participated in one of these popular activities at the Chappaqua Library this year; but do you also know that the masterminds behind these projects are Girl Scouts?   A record number of eight girls received their gold awards today at town hall.

“I helped coordinate a story walk with different books for every season,” recipient Lindsey Brosnan related.  The walk was developed to captivate children meandering along the nature trail at Roaring Brook Elementary School.

Aparna Nathan created Reels and Reads to encourage middle schoolers to expand their minds through reading.  She held events at the library to discuss books and cinematic adaptations.

Megan Marie Maher delivered 65 knitted blankets to Blythedale Children’s Hospital and Hope’s Door.  Knitting instructions were accessed via her website by many volunteers.  Katie Duncalf provided assistance for inmates and children at the Bedford Hills Correctional Facility and founded “Hope”, a new club at Greeley, whose members  joined in her endeavor.  In Seniors Make a Wish, Megan Elizabeth Enright coordinated visits to the elderly.  Rebecca Fischer was thrilled to see how “the kids expanded their vocabulary,” via her signs at Wagon Road Camp.   Julia Friedland showed the community how to to use recyclables in artistic creations.  Putnam Hospital Center benefited from Neha Gupta’s Making a Kid-Friendlier Hospital.

A bevy of local dignitaries attended the ceremony.  Assemblyman Robert Castelli told the recipients:  “You have reached the pinnacle of girl scouting.”  He presented citations on behalf of the New York State Assembly.  Westchester County Legislator Michael Kaplowitz proclaimed April 29 as Lindsey Brosnan day.  The next 7 days were assigned to the other honored girl scouts. Town Supervisor Susan Carpenter praised the girls and  related her history with scouting.  “I was a girl scout.  My mother led my troop,” she said.

Louise Weadock made Belle of the Ball look oh so Wee Zee last night at the grand opening of  WeeZee World,  a 16,000 square foot “sensory play space” of pure fun, joy and opportunity at 480 Bedford Road in the Chappaqua Crossing Business Development. I arrived expecting the ordinary and ran smack into the extraordinary: I was struck by the sheer number, some 35 in fact, of highly engaging, interactive and imaginative sensory experiences available  to kids from babyhood through early adolescence.   I was given a tour of various individual stations, and snapped photos, but in this case, ya really gotta see it to believe it!

The emphasis throughout is on sensory learning.  With such stations as the “Rainforest & Storm Zone,” “Vibration Station” and “Cyber Action” Floor, the emphasis in virtually every area is on “sensory learning,” according to Weadock, a registered Child Psychiatric Nurse and owner of Access Nursing & Health Care Services, who created  her “family’s fantasy come to life.”  Weadock, whose daughter was diagnosed with a severe Sensory Integration Disorder, became fascinated with the effects multi-sensory experiences had on her child’s ability to understand, accept and adapt to her world.  She purchased a diverse variety of sensory equipment and created a playground in the basement of her home for all the neighborhood kids to enjoy with her daughter.

Sixteen years later, she has opened Wee Zee World which is intended to be “the largest and most cutting-edge indoor play space for cognitive development in the county and the entire New York region.”   “We want the sensory adventures and social relationships discovered inside WeeZee to inspire each child to believe, “Yes, I can!”  Some 100 full and part time individuals are expected to staff WeeZee in fields including coaching, therapy, education, design and clerical. Hours are 8 a.m.- 9 pm.  For more information, visit www.weezeeworld.com   — Grace Bennett 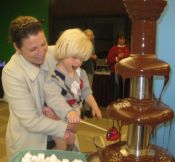 As part of a $5,690,200 investment announced today by Governor Andrew M. Cuomo for ‘NY Works’ projects that will allow for 15 flood control system and dam repair projects in the Hudson Valley, Assemblyman Robert J. Castelli highlighted a $98,000 project announced for the Town of New Castle.

For years, flooding along the Saw Mill River Parkway has been the bane of our existence in Central Westchester, and has morphed from minor annoyance to serious safety hazard,” Castelli said. “The October Nor’easter and Hurricane Irene further demonstrated the inadequacy of our failing flood control infrastructure, and I applaud Governor Cuomo for making these infrastructure upgrades a centerpiece of this year’s budget, which will create jobs here in Westchester.”

According to Cuomo, the Budget which Castelli supported, continues their commitment to fiscal responsibility while creating jobs and strengthening communities across the state. It closes a multi-billion dollar deficit with no new taxes, fees or gimmicks, limits spending growth to two percent or below for the second year in a row, and launches the NY Works Task Force to invest billions of dollars to rebuild the state’s roads, bridges, parks, and other infrastructure and create tens of thousands of jobs.

“For the second year in a row, New York State has passed a transformative and balanced budget that holds the line on spending, while focusing on job creation and government efficiency,” Governor Cuomo said. “The centerpiece of this budget is the New York Works program, which will help rebuild our aging infrastructure, including our dams and flood control systems, to protect people and property throughout our state.”

NY Works is designed to reinvent state economic development with innovative new strategy that will put New Yorkers back to work rebuilding the state’s infrastructure. The Task Force will help create tens of thousands of jobs by coordinating comprehensive capital plans, overseeing investment in infrastructure projects, and accelerating hundreds of critical projects across the state.

The state’s Department of Environmental Conservation (DEC) maintains 106 flood control projects, of which 91 have been rated “minimally acceptable” or “unacceptable” by the Army Corps of Engineers. Additionally, DEC owns 577 dams statewide. Of the DEC-owned dams, DEC engineers classify at least 24 dams as “high” and “intermediate” hazard structures, where failure poses serious threat to human life or significant property damage.

The New York Works Funds will designate $102 million, leveraging more than $100 million in matching funds, to repair aged and otherwise failing structures. The $102 million will include $18.5 million to repair state-owned dams, $56 million to perform maintenance of flood control facilities such as levees, and $27 million to implement coastal erosion and inlet navigation maintenance projects, plus over $100 million in matching funds.

In Chappaqua, for example, $98,000 has been announced to fund the mapping, and surveying of a flood control project on the Saw Mill River, where the river runs between the Saw Mill River Parkway and Washington Avenue. The funding also provides for the purchase of an access easement, which will allow for maintenance, and possible future improvements to the flood control project, which was built in 1982, deepened and widened a 30 foot channel, and built a retaining wall.