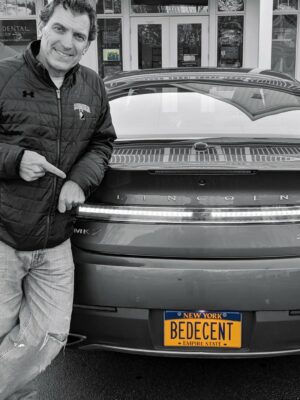 After nearly 20 takes, Michael, with the help of his daughter, compiled their first “watchable” video. His days during quarantine, just like the rest of ours, had gone a bit sideways. Mike played barista in the morning and his wife wore the chef hat come dinnertime. Something he admits he always wanted to do more of, COVID-19 finally afforded him the time he wanted to enjoy dinner at home with his family almost every night. Supervisor Schiliro also took this time to address his love for big, gooey, soft, homemade pretzels which took a hit when he became gluten-free. Not really known to be a baker, he wept. I’m kidding. COVID also afforded Michael the time to find some great recipes. In addition to the pretzels, he claims his gluten-free bread and chocolate chip cookies are also not to be messed with. Wow. Ok, I’m hungry!

As the Senior Vice President at PCSB Bank in Yorktown, Michael would tell you that his days were quite different both as a banker and Town Supervisor… conferences got cancelled, breakfast and dinner meetings were long-past rescheduling, golf outings were caput, and cocktail parties were no-more. Bank time was spent handling loan deferrals and PPP loans vs. new loan referrals and Town time was spent assessing and adapting by the hour vs. using year-old best practices.

It was mid-April, and Michael and his dog were out collecting litter left behind by a few bad apples and COVID-19. Keeping our 232-year-old town tidy is something he takes extremely seriously. Litter leads to more litter (broken windows do the same).

Schiliro was the only car headed north on the Taconic that day. Headed to work, busier than ever between his job as a banker and an elected official, when all of a sudden an eerie feeling set in. A pit in his stomach. He was never the only car on the road; not THAT road. Quick to find a smile, he reminded himself of the lady who greeted him at DeCicco & Sons the night before. She was proud to offer a smile that glowed through her mask, add him to the in-store headcount, offer gloves and a mask, and without saying anything, offered the comfort and reassurance he needed to feel safe shopping there. He smiled and felt eager to get off the Taconic and back into DeCicco & Sons.

Listen, Michael knows the school systems, the restaurant scene, open spaces, and claiming to be the pizza capital of Westchester is all incredibly appealing to a potential homeowner, but none of these matter if you don’t have soul. We. Have. Soul. 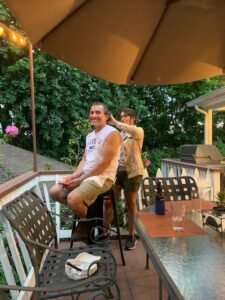 The proof is in the pudding…

A doctor Michael never met reached out to make an appeal to him during the early onset of the pandemic. Her medical facilities were already experiencing a shortage of masks and she needed his help blasting a call-to-action to the community. Done. Email sent. Well, the plastic bins Michael left on his lawn to collect the masks kept proving to be too small. As the days past the bins continued to overflow with donated masks; first medical ones, and then cloth. And WHOLLY CLOTH. LEARN THIS: our town is full of agile and scrappy seamsters and seamstresses. Photos of families in town with their sewing machines started popping up on social media outlets (and Michael’s inbox) and materials and ideas were flowing through town about how to even make one of these things. But not a soul was deterred… okay, maybe ONE person got fed up with the bobbin and threw in the towel, but Michael wasn’t kidding when he said THOUSANDS of homemade cloth masks were dropped off at his home to be donated. These savvy Mask-Makers were incredibly inspiring.

As they reduced staff based on local orders, the excellent leadership of Town Administrator Kevin Hay and Confidential Secretary Mindy Berard stood strong with all of our employees and continued to service our community in the way it deserves. Thankful to the police, fire departments, frontline medical staff, clerks, supermarkets, deli-workers, sanitation contractors, and everyone who put themselves out there when other people were not even allowed to go to work, Michael will be forever grateful for your courage and bravery.

BE DECENT. My takeaway from our interview with Michael is that all he wants is everyone to be decent to each other and our environment. Small ask. Big task. But we can do it. Full speed ahead.

And some more pudding for you…

Jennifer Drubin Clark, mother of 2, creative junkie, and the co-founder of North Castle Grounds, Inc.; a local non-profit organization funding enhancements to the parks and recreational programs in her community. Jennifer is also a Previvor, Patient Advocate for OTM Breast Reconstruction, Parks & Recreation Advisory Board Member for the Town of North Castle, Professional Writer, Comedian, and Unprofessional Artist & Designer.