Horace Greeley grad Dan Leventhal (‘10) loves lacrosse. He played it in high school and continued on at Tufts University, where he won a national championship and majored in sociology. Now, he’s brought his favorite sport to the South Bronx, where he says it has the power to change the lives of local kids for the better, both on the playing field and in the classroom.

Leventhal spent some time in Israel after graduating from college and from there, he joined Teach for America and was assigned to The Highbridge Green School, a middle school in the South Bronx. He just finished his third year there teaching math to eighth graders.

In 2015, Leventhal decided to start a lacrosse program at the school, and he launched it in the spring of 2016, at Highbridge Green, a school he says is located in the poorest congressional district in America.

“The kids all love lacrosse,” Leventhal said. “In the South Bronx, everyone’s playing basketball. It gives them uniqueness and a chance to differentiate themselves. It’s a fast-paced sport, combinging basketball, football and soccer,” Leventhal added.

“These kids have so much going on at home,” he added. “This gives them a release.” And that’s what Leventhal’s aim is: to help the lacrosse scholars, as they are called, deal with their lives successfully.

And Leventhal said so far, outcomes of program participation have shown positive results, including better attendance, punctuality and higher achievement in various markers of reading and math learning on average when Bronx Lacrosse scholars are compared with other students at Highbridge Green. In order to participate in the program, a certain grade point average is required, Leventhal said. “I don’t think that’s a coincidence,” the principal of The Highbridge Green School has said of the achievements of the Bronx Lacrosse scholars. 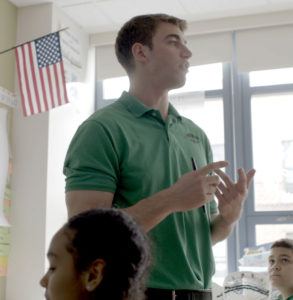 Last spring and fall, a girls’ program was added at The Highbridge Green School and there’s also a Bronx Lacrosse program now at another local middle school.

While lacrosse is a spring sport, Bronx Lacrosse has the student athletes training in the fall also, Leventhal said, and even during the summer. “What we’ve done this summer is gotten our kids scholarships at different lacrosse camps. It’s a great opportunity for them,” he said, adding that next year Bronx Lacrosse will be looking for even more camp opportunities and also aiming to find sponsors to help foot the bill for the kids to go on fall trips to play lacrosse with teams from other programs. Bronx Lacrosse has already traveled to Connecticut and to Chappaqua.

“It is a lacrosse organization, but the mission is to keep kids out of the streets and create positive outcomes,” Leventhal said. “It’s an organization that aims to empower youth in the classroom and on the field.” To that end, Bronx Lacrosse has two full-time program coordinators besides Leventhal.

This past year, besides growing his organization and teaching math,  Leventhal played in the World Lacrosse Championship as a midfielder for Israel’s team, which placed 7th of 45. “Some of our games were on ESPN so it was exciting for the kids to watch me,” Leventhal said. “And make fun of me.”

Most funding for the program currently comes from money distributed from each school’s principal as well as from NYC’s after-school program, Leventhal said, but as he transitions to full-time with Bronx Lacrosse he will be focusing on developing other fundraising sources.

Of his latest plans, Leventhal said “Fundraising is a major priority. We’re going to have a big fundraiser, probably next spring.” Leventhal said his desire to give back is motivated in part by his upbringing in Chappaqua. “I had a lot of opportunity growing up,” he said. “My parents always got me whatever I needed for sports. That’s our goal here–to make these things accessible to these kids.”