On Sunday, November 6, 2022, two of my great passions in life came together spectacularly with President Joe Biden’s appearance at Governor Kathy Hochul’s campaign event at my alma mater, Sarah Lawrence College. Since 2016 I have devoted much of time and energy to electing Democrats in New York and across our nation. Since graduating from Sarah Lawrence, I’ve been an active alumna, and an all-around booster, trying to make sure as many people as possible learn about the college and get to experience the kind of extraordinary education I had.

My husband Peter (another Sarah Lawrence alum and member of the Board of Trustees) and I, waited about two and half hours to get into the event – in a line that snaked from the airport style scanner by the Performing Arts Center, all the way down Kimball Ave and around the corner onto Palmer. The event started at 4PM and finished at around 7PM with a rousing speech by President Biden. 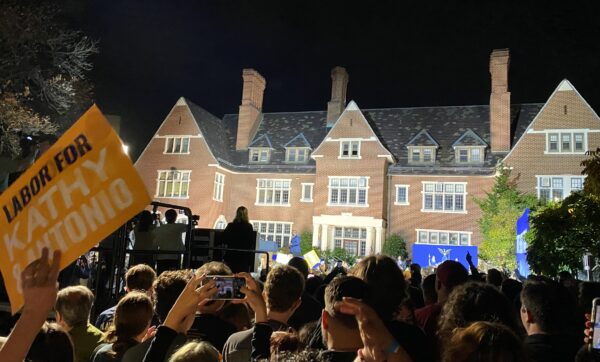 The speakers all highlighted the Democrats’ message: “Democrats deliver.”  All spoke to the economic and social benefits of electing people who hold the Democratic values that help everyone to rise. As fitting on a college campus, they all spoke most directly to the young people in the audience. In speech after speech, they recognized the passions and efforts of these young people. Joe Biden’s rousing speech was well crafted and well delivered, as one would expect from the President. But in addition to that, his speech highlighted his humanity. Just at the time the speech was building up to a big crescendo, someone near the podium seemed to faint. President Biden stopped speaking, directed medical personnel to come help the person, and then, only after he saw they were taken care of, restarted his big finish with a call for everyone to get out to vote.

There were a good number of my fellow Indivisible activists in the over 1,000-person crowd. I saw many of Westchester’s Democratic party leaders. I saw activists from our labor, LGBTQ, environmental, and human rights groups. I was also really fortunate to get a little glimpse into the world of bunch of current Sarah Lawrence undergrads, as we stood together on North Westlands Lawn–the spot where I graduated, the spot where they would graduate. Together, we cheered the same lines, chanted the same responses, sang and danced to music between speeches, and most of all, together we made the same commitment to GET OUT THE VOTE.

This was the first time I have ever seen a US President. I can’t lie, it was pretty exciting! Still. the best part of the event for me, was the energy and commitment coming from the Sarah Lawrence College students and other young people in the crowd. Our young people are genuinely motived to make our planet a more livable place and to make our society a more equitable one, and they were thrilled to hear that their efforts were seen, and their concerns were heard, all the way up to the very top of the US government.

President Biden stuck around for a good amount of time after the event was over, talking and listening to the students, and taking pictures with them. We are all going to remember this unseasonably warm November evening for the rest of our lives.

If you haven’t yet voted early, the polls are open tomorrow, November 8th from 6 am. To 9 p.m.. Your vote is your voice. Use it!